Yesterday, Thanksgiving, was an especially good day. It included “An Interfaith Celebration of Thanksgiving” at Basilica of St. Mary co-officiated by Ministers of Westminster Presbyterian Church, Hennepin Avenue United Methodist Church, Plymouth Congregational Church, the First Unitarian Society of Minneapolis, the Imam of Masjid Al-Imam, the Rabbi of Temple Israel and, of course, Pastor of Basilica of St. Mary.
It was an inspirational hour. One of the officiating clergy read, early on, a brief but highly inspirational poem, Otherwise, by Jane Kenyon.
“Otherwise” is a very powerful reminder not to take what we have for granted…and not to expect it to be permanent. In particular, note the final sentence of the poem.
(click to enlarge photos) 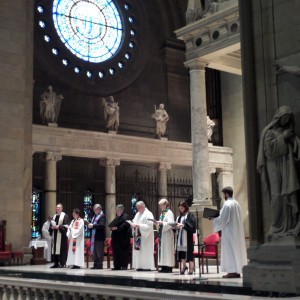 Pastors at the Interfaith Celebration of Thanksgiving at Basiiica of St. Mary Nov. 28 2013 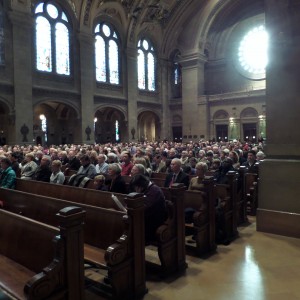 At the Interfaith celebration. 500 programs were printed, and they ran out long before the service began.

Of course, shortly before this years American Thanksgiving, there were two other happenings of great significance:
1) a breakthrough in the years-long stalemate between the U.S. and Iran signals a chance for progress. Of course, those whose power depends on enemies and potential war are not pleased, but I think the beginnings of an agreement is very good news indeed.
2) and Pope Francis I issued his highly publicized teaching, putting ‘meat on the bones’ of changing the tone of power in the Catholic Church. I haven’t read the entire document as yet; a friend who has, recommends it highly. You can access it here.
Then there’s “Black Friday” that uniquely American Exhortation to Shop to Achieve Business Success (“Profit”) during the “Christmas Season”.
Many have answered the call….
In my corner of the universe, the business Christmas Season began at my local coffee shop about November 1, when Holiday napkins first appeared, and the background muzak began to include a sprinkling of Christmas songs.
Today begins all-Christmas all-the-time, I suppose.
We’ll put up the tree next weekend, Cathy tells me, and it will be, as usual, nice, though it forces me to relocate my favorite chair. Oh well.
But for me the best “Christmas presents” of all have already been received, as noted above.
https://thoughtstowardsabetterworld.org/wp-content/uploads/2022/04/thoughts-300x138-1.jpg 0 0 dickbernard https://thoughtstowardsabetterworld.org/wp-content/uploads/2022/04/thoughts-300x138-1.jpg dickbernard2013-11-29 12:47:532013-11-29 12:47:53#808 – Dick Bernard: Some thoughts on "Black Friday"