UPDATE NOV. 3. NOTE COMMENT FOLLOWING THE POST
Today is Advent for many Christian churches of the western tradition. Some would call it the beginning of the Christmas season culminating with Christmas Day, recalling the birth of Jesus.
At Midnight Mass, December 25, Luke 1:14 will be the Gospel reading. Here is the first part of the text, from my Uncle’s 1941 Bible:
(click to enlarge) 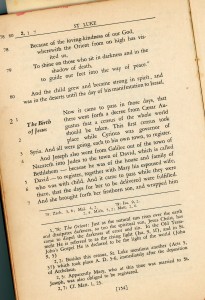 This is one of the very few times that a “census” is mentioned in the Bible, accompanying the final days of Mary’s pregnancy and the birth of her son, Jesus.
*
A Thanksgiving note from someone I know very well caused me to look back at the 1940 census of a tiny North Dakota town in which we lived for nine years in the 1940s and 1950s. I had printed out the census some months ago just to see who lived there, then.
This time, a sentence in the note caused me to look at this census in more detail. “It’s great to have been raised in the rural upper midwest in a nuclear family of modest means but rich in an extended family, deep faith and devoted to getting up in the morning and going to work during a time when if you didn’t work you didn’t eat.”
This is an example of the “good old days” narrative I often see in those “forwards” of one kind or another: life was so good, then. There is room for a great deal of dialogue within that single sentence.
Reality was much more complicated.
1940 in the United States came at the end of the Great Depression, and before Pearl Harbor forced our entrance into World War II a year later. It was a time between, which people born from about 1930 forward experienced in full, from the disastrous Depression to victory in War (with over 1,000,000 American casualties, over 400,000 of these deaths; 50,000,000 World casualties overall).
Before the Depression came the disastrous World War I, and the following false prosperity of the Roaring 20s; after WWII came the Baby Boom beginning 1946. The first “Baby Boomer” turned 65 in 2011.
In 1940, Social Security was a baby. The Act passed in 1935; the first Social Security check was issued to an American in 1940.
I was born a month after the census taker knocked on my parents door in April 1940, so I personally experienced the time and the values through the experiences of my family and extended family. But I didn’t take time, until now, to get a little better view of who we were, back then.
I think the little North Dakota town I spotlight in 1940 was really a pretty typical slice of the U.S. population, then. Here it is:
272 was the population of the town
There were:
78 households
39 residents had the occupation “housewife”, a very hard job.
113 were employed in “industries” including:
23 in assorted kinds of government sponsored and paid relief as:
14 in WPA*, and 4 more in WPA related NYA*
4 employed in CCC*
1 employed in AAA*
3 were U.S. postal workers (federal government).
9 were employed by the local public school
6 were listed in the separate and distinct enclave of the Catholic Priest and Nuns and Housekeeper. For some reason, the census taker felt a need to separate this group from the remainder of the town population! It was as if these six were part of a separate town within the town.
100 of the people of the town – more than a third – had not been born in the state of North Dakota. Of the population, 26 had been born in 11 different foreign countries; 74 had been born in 16 different states.
And, not to forget, most of the population were children unable to fend for themselves.
If you’re counting, about a third of the working age population was in government employment in 1940.
One of five were on some kind of Federal Relief work projects. Much evidence of these projects still survives everywhere in our country.
The federal involvement in the towns welfare (in a real sense) was essential to the towns survival and the countries recovery from Depression. Of course, even then, some, including relatives of mine, disliked these programs as make-work for “loafers” (as one relative described them); and some detested FDR – it was as it was, then.
And now.
The debate rages similarly today, I suppose.
Looking back, I would say that the biggest difference between then and now was that in 1940 in small towns and neighborhoods everywhere, people were forced to have a greater sense of community. There was not much choice about being isolated. You lived with who was there, unlike todays increasingly fragmented world where we think we can live in our little pods and avoid responsibility for others, or escape some how or other bad times.
So be it.
It is something to consider, and talk about, this Advent season. 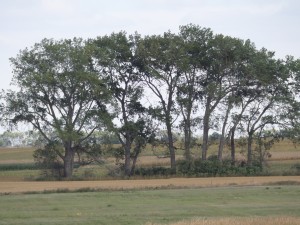 *
There are numerous links to talk more about any of these projects.
WPA – Works Progress (later Projects) Administration, established 1935
NYA – National Youth Administration, established 1935, within WPA
CCC – Civilian Conservation Corps, established 1933
AAA – Agricultural Adjustment Administration, established 1933, helped farmers survive the Depression
COMMENT from Rick B, Dec 2: Interesting Read….But, I think one of the key components that Dick misses is he only focuses on the “town” residents relative to the region “residents”. Small towns were the hub for all the rural local farmers which numbers where significant relative to the “town” residents. It certainly was the case during the 1960’s and sure it was the case in the 1940’s.
In the small town school I attended, farm kids outnumbered town kids 2/1.
Our town was around 300 population.
Hence, if you break down the demography of a small rural town community, it should be the entire community. Government and social worker percentage was not what Dick portrays.
RESPONSE from Dick Dec 3: Of course, ’tis true what you say. I could have printed out the census for the surrounding rural townships, but enough was enough for this post!
I was small town North Dakotan for my first 21 years, then came back and taught one year in small town ND, and I’m often back and forth…including a not so simple day of driving yesterday from LaMoure to suburban St. Paul. In fact, in this little town (and all the others we lived in) my Dad was Superintendent of Schools, and often my mother taught elementary as well.
I try to keep my posts within somewhat manageable length, and shorthand always leaves something to be desired.
I got close to expanding on the single Agricultural Adjustment Act person who, of course, impacted on probably all of the local farmers in a positive way. And I thought about bringing in the County Seat of the town which was also an important part of the network bringing the feds to the locals. As was the state, assorted agencies, etc.
My most important point, personally, was to remind readers of the “good old days” school of thought that back-in-the-day lots and lots of common folk depended on programs such as I described during the Depression and War years . The tragic and difficult times seem ‘edited’ out in “good old days” narratives.
In addition, this little town had (in relative terms) a large Catholic school which, as noted in the blog, seemed to puzzle the census taker, and was set apart as something of a town unto its own self. I went to that particular Catholic school for my first five years. (One other year, in another town, I also went to Catholic School, and five of the other years had either my Mom or Dad as one of the public school teachers. So, I sometimes note, I’m a product of Home and Parochial schools.)
Relationships in little towns could be very complicated, indeed, but in the end, usually, if someone experienced a crisis, most would chip in to help.
It was an interesting exercise to look through those eight pages of census data for Sykeston!
POSTNOTE:
After writing the above, I happened across a fascinating television program about those olden days. It’s Jerry Apps Farm Story, and you can watch it on-line here. In my case, I saw it as part of a fundraiser for Minnesota Public Television. It was very interesting.
As I watched the storyteller remember his life on the farm, in context with my own life, and what I had just written, I came to think that these times, particularly the days of horse farming and World War II, were immensely difficult. Some would say they built “character”, but I doubt that even those hardy folks, the now elderly survivors, would recommend them to any one today, nor would many today accept those conditions for themselves. It is todays “illegals” and foreign sweat shop workers who bear the brunt of the backbreaking work and the risk so common in the “good old days”.
There is a pretty profound disconnect, I’d contend, in those who argue the “good old days”, but wouldn’t want to live in those same good old days again….
*
Then, a little later the same evening came a marvelous video about “Worn Wear”, well worth the 28 minutes watching time. The friend who sent it on, Shirley from Chicago area, included this note:
“Dear Friends and kindred spirits alike….
I can’t recommend this video enough! It is impressive on so many levels. Please take the time to watch it.
I hope you are able to find a few moments to watch this profound mission statement from a most reliable enterprise, Patagonia.
For all of us who try to reduce, re-purpose, patch and move towards leaving LESS of a footprint on the planet, I am asking you to pause and reflect. How many of us actually look at a used article of clothing and think about the stories behind the stuff we wear?
To quote just one gentleman in this video: Well worn clothing is like a journal.
Let us take the time to think about creating a simpler life as we embark upon the season of consumption and gift giving.
Watch WORN WEAR. As soon as you can.”
(I wrote Shirley back: my favorite winter coat is now over 30 years old. People who know me will attest…!)
https://thoughtstowardsabetterworld.org/wp-content/uploads/2022/04/thoughts-300x138-1.jpg 0 0 dickbernard https://thoughtstowardsabetterworld.org/wp-content/uploads/2022/04/thoughts-300x138-1.jpg dickbernard2013-12-01 05:47:322013-12-01 05:47:32#809 – Dick Bernard: The 1940 Census. An Advent Opportunity for Dialogue About Government and People Like Us and Relationships, generally.
0 replies