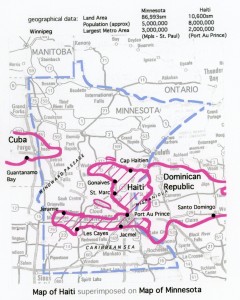 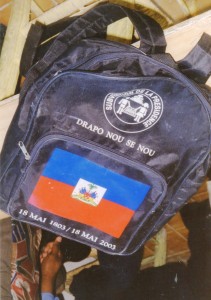 Ten years ago, early morning on this date, December 6, 2003 – a Saturday – I waited to board our flight from Minneapolis to Miami and thence on to Port-au-Prince, Haiti. There were six in our party, led by Paul Miller of Woodbury: Jeanne Morales, Andy Fisher, Jeff and Rita Nohner, and myself. Except for Paul, none of us had ever been to Haiti, a mysterious place to me.
Eight days later we returned: a life experience which forever changed me, for the better.
Late 2003 was a time of national pride but also great political turmoil in Haiti. Within three months, February 29, 2004, the government of President Jean-Bertrand Aristide had been overthrown by a U.S. backed and (very likely) orchestrated coup d’etat. We travelers apparently associated with the wrong friends (all very decent people, supporters of the Aristide administration, all doing very good things for ordinary people in Haiti.) I recall no personal times of tension, though we traveled freely to many places in Port-au-Prince. But by my count, one person we met was murdered outside the Presidential Palace two days after we met him; two persons we met ended up arrested before the coup (one of these “killed” by character assassination); at least two others went into exile at the time of the overthrow; another was killed by poisoning about a year later.
There was plenty of violence around and about in the land. In the manner of political narratives in media-rich countries like our own, the violence was falsely attached to President Aristide loyalists. “On the ground” in Haiti, it seemed to be the other way around: a legitimate government itself was under attack.
I wrote about our journey a few weeks after I returned. The writing remains on the internet here. Subsequently, I wrote about the coup d’etat, and about other things relating to Haiti, including a powerful 2006 visit to the interior of the country. Those links can be found at an outdated but nonetheless pertinent site here.
In 2008 came the summer of four hurricanes hitting Haiti broadside; and, of course, the horrific January 12, 2010, earthquake. Times have not been easy for Haiti. 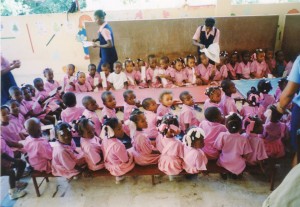 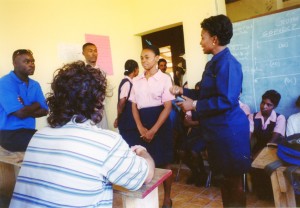 Paul Miller, our group organizer and leader, to whom I will always be grateful for the opportunity to visit Haiti then, and later, offered his recollections on December 4, 2013: “As anniversaries go, this one is daunting. Ten years ago I led a group of conscientious US citizens to Haiti to see first hand the conditions that existed there. It was my 7th trip to Haiti. It was my most significant trip because we met with people directly engaged in Haiti’s struggle to have a voice in its political affairs amid very real threats to their lives. Having the right to determine your own political leadership is not a lot to ask for but it wasn’t to be. Three months after our visit, Haiti’s fledgling democracy had been usurped, again, by the country that claims to be the leading defender of freedom worldwide. It was shocking to be told on the morning of February 29, 2004 by my friend Dick Bernard, that President Aristide had left Haiti. As events go, this one is right up there for me. I remember where and when I was told, just like I remember where I was when JFK was shot in 1963 and where I was when the earthquake struck Haiti in 2010.
It’s impossible to believe in the good intentions of your government when you understand what they have done, in our names, to the least of us, our brothers and sisters in Haiti. The coup that reportedly caused thousands of deaths didn’t feature the nifty slogan that came with the USAID tents after the 2010 earthquake that stated that it was a gift from the American people. This “gift” from the American people didn’t get advertised, you had to choose to see the truth. It’s a choice most of us don’t like to make because we want to think of ourselves as a voice for the voiceless. It’s a noble illusion that most of us hold on to despite the mountains of evidence that suggests otherwise. As our friend, Father Gerard Jean-Juste, said about our government during his impassioned homily during our visit to mass in 2003, “they help the killers, they don’t help the healers”.”
As time went on, a slogan “start seeing Haiti” took on real meaning for me, and doubtless for the others as well.
Today I maintain a listserv for passing along occasional items about Haiti.
Paul Miller, who now lives in Northfield MN, remains, with his daughter Natalie, very active in Haiti Justice activities. His website is here. 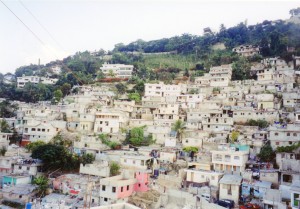 Hillside homes above Petionville. This area was among those devastated in the 2010 earthquake. Particularly note homes of the elite, on the top of the ridge.

POSTNOTE: thoughts in a letter written by myself some hours after the above was posted.
“There are endless memories. It was a gentle experience. The people we met were marvelous, including the poor. But it was a time of intense political turmoil. Th U.S., with support of Canada and France, was determined to get rid of the democratically elected President Aristide and ultimately they succeeded three months later. In a sense, I lived behind the sound bites that passed for “information” in the States. It was not a routine trip – perhaps a little bit like wanderng around in Benghazi, or Damascus, or Cairo today – except the enemy was our own government, determined that Aristide had to go, and bankrolling his opposition who in turn paid people to organize demonstrations or kill people, etc.
But, honestly, never did I feel the slightest personal tension.
I do remember the last afternoon and evening in Port-au-Prince.
I was resting and fell asleep at our residence, awakening with a start to a lot of yelling nearby which sounded ominous.
Turned out that next door to our residence was a soccer field, and the players were arguing about a disputed call. That was it, an argument on a soccer field.
So, life went on. The last day we had to dodge an occasional burning tire in the street. The last night we stayed in the Hotel Oloffson made famous by novelist Graham Greene in The Comedians and spent a couple of hours listening to a well known Haitian band, RAM. The next morning we went to the airport and headed home. In Miami, the Miami Herald headlined the instability in the Haiti we had just left.
I could go on and on. We had experienced the Ugly American policy first hand, and the story would continue….”
https://thoughtstowardsabetterworld.org/wp-content/uploads/2022/04/thoughts-300x138-1.jpg 0 0 dickbernard https://thoughtstowardsabetterworld.org/wp-content/uploads/2022/04/thoughts-300x138-1.jpg dickbernard2013-12-06 06:48:362013-12-06 06:48:36#810 – Dick Bernard and Paul Miller: Remembering a Memorable Trip to Haiti, December, 2003
0 replies

#809 – Dick Bernard: The 1940 Census. An Advent Opportunity for Dialogue... Christmas 2013: Thoughts before a Birthday and a Funeral
Scroll to top