Those who will take a moment to read this have a range of knowledge about who I am and what I’ve recently been about: from no knowledge at all onwards….
Two pieces of film sum up 2013 Thanksgiving for me.
Last year, about this time, a friend sent me a 10 minute clip of film entitled Gratitude, by the noted filmmaker Louie Schwartzberg. You can watch it here, wherever your life is, today.
Yesterday, another friend sent another clip of film, from CNN, about Pope Francis and the Disfigured Man. You can watch this clip as well, here, wherever your life is, today.
For me, this day, I recognize Uncle Vince whose life, is in transition, and his sister, Aunt Edith, who began the transition a year ago. All of us who know them can be thankful that we know them; as others can be thankful that they know each of us.
(click to enlarge photos) 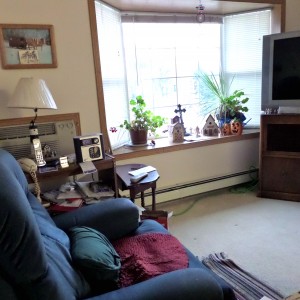 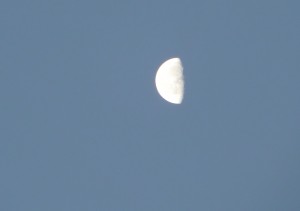 Have a great day.
POSTNOTE:
Five of us worked together to clean Uncle Vince’s apartment a few days ago. He finally had to move down the hall to the nursing home in their North Dakota town, to the same wing as his sister, our Aunt Edith.
Before I left town, I made one last inspection to see if we’d missed anything, and indeed we had: a dreamcatcher and a stained glass cross that had hung for several years in the same place on their living room window. You can see them in the above photo.
I took them down. Here they are, to symbolize for you whatever you wish them to symbolize…. 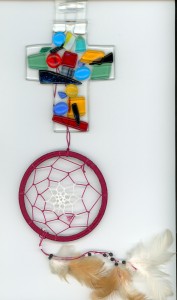