I continue to go through hundreds of photos left as part of the legacy of the North Dakota farm. Recently I was looking at this one:
(click to enlarge) 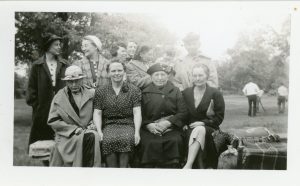 The initial focus was the women in the group photo. I didn’t know any of them, and I’ve sent them to a ND friend lifelong in that area to perhaps identify one or two or more of them.
But my interest turned to the guy in the background, who seems to be holding a stick, doing something.
On initial glance it looks like a stick, maybe a baseball bat. On the other hand, it may well be a croquet mallet for a lawn game popular back then. The stick may look a little fatter than in should because it is a bit blurred. If you click a second time over the man, you can almost see the croquet ball to the right, to his front….
Almost certainly the camera had caught a Sunday outing at the Memorial Park – the folks were all dressed up, as if after Church. Also, almost certainly, the women and men were farmers or engaged in agriculture in some way. Most were likely Moms or Dads, and Sunday was a day of rest.
If I’m right – that it is croquet I’m seeing. Not far away some more men were throwing “horseshoes” – real ones. And off to the left was the baseball diamond, where the town team was playing some out of town bunch, and there were kids, and people fishing, and visiting, and picnics and this and that.
As was (and is) most often the case, the old photos is not labeled as to year or people. It didn’t occur to anybody that somebody, 60 or more years later, would care who or what….
As I say, this was a farm photo, and there were hundreds of them, and I’m still going through them, and they won’t be thrown away.
Most were taken by a couple of versions of old box cameras, thence as time goes on, assorted new fangled cameras replaced them. Everytime we came to visit, Grandpa would gather us on the lawn for the traditional picture before we left for home. This was a Grandma deal as well, and their children followed suit.
The picture exists because somebody felt it important to not only record the moment, but to keep it for posterity.
The picture itself is just another moment in the life of some people out in North Dakota, among many moments in many days in many lives, filled with good times and not-so-good, crops, relationships, tragedies, children, whatever.
As we all know, some days are better than others….
Today at Basilica of St. Mary, Fr. Bauer asked all the men to stand up, and recognized every male there for whatever role they play in others lives. It was a nice touch, typical.
While this is a specific Father’s Day, yet another tradition in our society, all of us, regardless of gender, play a part in making our world a better place.
We are all fathers and mothers.
Have a great day.
https://thoughtstowardsabetterworld.org/wp-content/uploads/2022/04/thoughts-300x138-1.jpg 0 0 dickbernard https://thoughtstowardsabetterworld.org/wp-content/uploads/2022/04/thoughts-300x138-1.jpg dickbernard2016-06-19 12:38:212016-06-19 12:38:21#1136 – Dick Bernard: The Man in the Background: Father's Day 2016