One Page flier here:World Is My Country004The World Is My Country002 Jan. 26 – Feb. 1.
Sign up for pass code here. Include “CGS” in registration box.
You can probably watch the film on your home television. Everybody’s system is unique. Ask your nearby tech whiz – grandkids are great sources – to help you connect one to the other. Here’s an on-line tipsheet.
*
January 26 through February 1, 2018, the new film, The World Is My Country, will be available, free, on-line, in a special password-protected site for Citizens for Global Solutions. You’ll be able to share the CGS password with others, so they can see the inspiring story of Garry Davis, “World Citizen #1”. I strongly encourage you to at minimum view the film, and to share this communication about it. 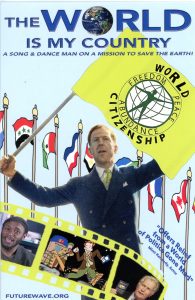 I first learned of Garry Davis and plans for this film project in 2011, and from early on have remained active as a volunteer in, and contributor to, the project.

In the fall of 2012, I showed a very early draft of the film to a dozen high school students in St. Paul – I wanted to see how they’d react to a story told by a 90 year old man, about his adventures which began more than 50 years before they were born. It was there that I observed that this story would attract and keep the interest of young people. The World Is My Country is a permanent demonstration to today’s and future generations that citizens can and do make a difference.

All ages, I have learned while watching subsequent audiences view the film, find the film both interesting and inspiring.

The World Is My Country is the story of a young song and dance man who enters World War II as a bomber pilot. His experiences caused him to rethink the notion of war as a means to solve problems. Garry Davis is that man, and he tells his story in person at age 90. The film features rare footage of events like the opening sessions of the United Nations in Paris in 1948, and the passage of the Universal Declaration of Human Rights. More than half of the film is devoted to addressing the idea of solutions which are open and usable by ordinary citizens as ourselves.

Citizens for Global Solutions (CGS), an organization in which I’ve long been active, has been involved since the beginning and sponsored the very successful World Premiere of “The World Is My Country” at the Minneapolis/St. Paul International Film Festival in April, 2017. The filmmakers were very pleased with the success of this CGS sponsorship – as you can see here. That’s why they are offering this free week – to invite others to help sponsor the film at other film festivals, or even hold their own mini-film festival showing three or more uplifting films about global solutions. The free-week movie will state that it is a Film Festival Screener and can’t be copied or reproduced.

I helped arrange for Twin Cities public TV (TPT) to see the screener – and they liked it so much they want to broadcast it. However, TPT can’t do so until the filmmakers raise $35,000 to upgrade rights to the historic footage from “Film Festivals Only” to “All Rights and Media.” Arthur Kanegis, the director of the movie, explained to me that footage houses have preserved all the amazing historic footage in cold storage over the decades. Therefore, they charge high prices for filmmakers to license it. His plan is to raise the money by getting lots of people involved in showing it in film festivals around the country. He hopes viewers will pre-order the DVD and buy screening kits, T-shirts and other items to raise the funds needed to be able to show the film on PBS stations across the country, show it in theaters, and distribute it on sites like Netflix and Amazon.

To pre-register for the free week click here and spread the word. Also, look for the website and password at this blog on January 19. This special film will accessible to anyone with the password and access to the internet from January 26 to February 1.

The most recent newsletter of Citizen for Global Solutions MN can be read here: CGS-MN Newsletter 2018 January final. The national CGS website is here.

Coincident with the film is a year long exhibition entitled 1968 at the Minnesota History Museum in St. Paul. It is a very interesting exhibition. 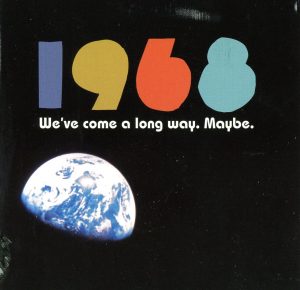 Directly related to both the film and the exhibit was a project of a bipartisan group of Minneapolis-St. Paul area leaders from 1964 forward which directly connected with Garry Davis, including in 1968. You can read and watch evidence of this project here (Lynn Elling, and the film Man’s Next Giant Leap); and here.

A history of Minnesota’s efforts with World Citizenship can be read here: Minnesota Declarations002, especially pages 3-10.