PRE-NOTE: An organization in which I’m active, Citizens for Global Solutions MN, sponsored the very successful World Premiere of this film, “The World Is My Country”, in Minneapolis in April, 2017*. Film Director Arthur Kanegis is offering anyone with internet access one free week access to this film, beginning one week from today, Jan. 26-Feb. 1, 2018. Details follow, as provided by the films producers. This is a unique opportunity. I hope you take the opportunity. Dick Bernard
*
For years you’ve known that our current path of war and ecological destruction is insane.

Finally, a movie says it all – in ways you never dreamed of!

“The World is My Country,” is the perfect tool to show people there are GLOBAL SOLUTIONS!

It’s the movie that’s getting people out of their doldrums. It’s inspiring people with new hope. It’s the antidote to a world of “politics gone mad!”

It’s the intriguing story of how one little guy, a song and dance man on Broadway, turned his war guilt over bombing civilians into an electrifying action that galvanized war weary Europe and sparked a movement. A mighty movement that helped spark ​recognition that we have ​universal human rights​. A movement that helped inspire people to unite the nations of Europe – which ended a century of wars between its member states!

Now this film can help inspire the world to do ​something even better ​- so​ human rights can truly be honored and​ disputes can be taken to court not the battleground!

It’s a lost piece of history, that gives us what Martin Sheen calls: “A roadmap to a better future!”

Sign up now to get your special viewing code here.

Here’s the deal. This film about World Citizen #1 Garry Davis is so new that it’s not yet being shown on PBS, in theaters or on Netflix or Amazon. It’s only being shown at film festivals​ – where it’s getting sold out crowds and standing ovations!

​T​he director of the film, Arthur Kanegis, wants you to see it — so you can help get it into film festivals in your area. ​ Or ​even make your own GLOBAL SOLUTIONS festival of films!

​After you see it, he’ll tell you how.

​Meanwhile, n​ow is the time ​to share the good news:

1. Forward this post to all your friends and family.

2. Contact other groups and organizations and invite them to send announcements to their members. 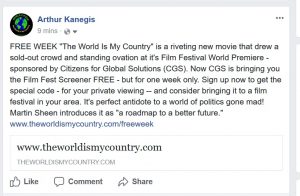 As one of those special people — who is ahead of your time — don’t miss this opportunity to make a ​huge​ difference.

Of course you have tons of things to do – but this is the time to put them aside — while you take on ​what Einstein thought was the most important thing:

”Mark my words, this boy, Garry Davis, has grasped the only problem to which I myself am determined to devote the rest of my life, up to my very last day: a problem which is, very simply, the problem of the survival of the species. It is a question of knowing whether mankind – the very universe of man – will disappear by its own hand, or whether it will continue to exist” – Albert Einstein​ (​Quoted in the transcript of 10/4/1949 hearing before the 14th Court of Corrections in Paris, as translated by Richard V. Carter in Survival Meetings, Writers Club Press, 2001​)​
​
​Start now by signing up at: www.theworldismycountry.com/freeweek

Together we can fulfill your lifelong hopes and dreams for a better world!

* – I previously wrote about this film on Jan 5, here.

“The World Is My Country” , an inspirational film.
0 replies

The House Cat #45 at 1: Responding to Mollie Ziegler Hemingway
Scroll to top