A day or so ago I answered the phone and a little-person voice announced herself as “Susie”.
Susie? I thought it was a misdial. Then her mother came on, and I learned that I was talking to granddaughter Lucy, all irrepressible five years of her.
Her sisters, Girl Scouts, had convinced her to call us to alert us to Girl Scout cookie time. As I type this blog, their Mom is on the way to our house with the goods, just in time for Mardi Gras.
Earlier today, I stopped at Lucy’s aunts school. We were comparing notes. Joni said that she’d recently seen Lucy, and the first words out of her mouth were “how many boxes?”
Ah, salesmanship, and marketing….
It all reminded me of an occasion a year ago when I was part of a small group meeting with a top executive at a major company to cadge a donation for the Nobel Peace Prize Festival (now Forum) at Augsburg. The last member of our group, a nationally known figure, came into the lobby, and his first statement was, “what’s the ask?” What did we want from this appointment? He knew the trade.
Yes, we made the sale that day. It helps to have people along who know how selling goes….
I never was in the sales profession, but I admire good salespeople, and from time to time I pick up useful tips, like “what’s the ask?”
The guy who called the meeting that day was my friend Lynn Elling, then 90, who is a retired and successful salesman (financial products, Lincoln Life).
Recently he and I were visiting and he felt inclined to describe the sales process, simplified. He said (and this is useful for any of us selling anything), that the rule of thumb was that it takes three calls to get an appointment, and three appointments to get a sale. Most of us don’t have the stamina to jump through those hoops.
Then he described the Sales Pyramid, which is very simple, really: 1) you must know something (“credential”); 2) you must disturb the client; 3) then you propose a solution; and 4) you close the sale.
Oh so simple. 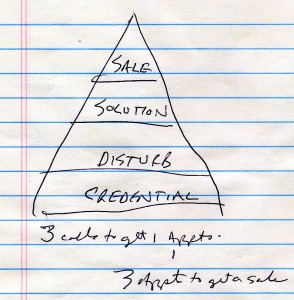 I thought back to other little ditties relating to selling: to get a sale you must sell the product “7 times in 7 ways”; if you want a successful event, remember three F’s: Food, Fun, Family.
A survival skill for me in my early career was to internalize “patience and persistence pays”.
And as we all know from experience, a good “sale” is one where both the salesperson and the customer win, and months later the customer is glad he or she ‘bit’. We all know what that looks like.
Not so cool is when the objective requires that one side win, and the other lose…(very much like contemporary politics).
Of course, all of the strategies, even the good ones, don’t always work.
Recently a retired minister friend recalled a pitch someone had made to magnate Curt Carlson. His colleague was very nervous, and couldn’t get to the point. Mr. Carlson intervened, and coached the minister along.
The pitch was made, and Mr. Carlson responded, “I decline….”
Good luck Girl Scouts.
Oh yes. We’re now the owners of ten boxes….
UPDATE April 22, 2012: Recently I was visiting my friend, Lynn Elling (see above), and he had by his side the autobiography of CNN founder and mogul Ted Turner. In the book, Call Me Ted, Lynn said that Turner’s mantra for success was very simple:
“Early to bed,
Early to rise,
Work like hell,
and Advertise.”
Makes sense to me.
https://thoughtstowardsabetterworld.org/wp-content/uploads/2022/04/thoughts-300x138-1.jpg 0 0 dickbernard https://thoughtstowardsabetterworld.org/wp-content/uploads/2022/04/thoughts-300x138-1.jpg dickbernard2012-02-14 21:21:262012-02-14 21:21:26#518 – Dick Bernard: The Ask.