The annual Memorial Day observance of Veterans for Peace Chapter 27 is today, 9:30-10:30, at the Vietnam Memorial on the Minnesota State Capitol Grounds, St. Paul. This is always a meaningful observance.
(click on photos to enlarge them) 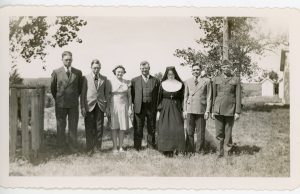 Long family, 1943. Francis at right. The Francis’ story follows the Vigil photo, below.

(I submitted the following commentary to the Minneapolis Star Tribune, May 20, 2016)
The scheduled visit of President Obama to Hiroshima is a great many years late, but commendable, a positive move away from our enslavement to a nuclear system and, hopefully, away from the “war is the answer” response to most any international problem.
I was five when those bombs dropped on Hiroshima, then Nagasaki, in August, 1945.
My mother’s brother, George, since 1943 a Lieutenant on the Destroyer Woodworth, was in the Pacific. The ship’s log records the boat as docking at Tokyo September 10, 1945.
After the bombs, Grandma Rosa Busch wrote her son a letter from the ND farm: “Hurrah, the old war is over!” August 9, George’s wife, Jean, wrote from near Grand Forks, “The news that excited everyone is Russia’s declaration of war on Japan. Surely Japan will crumble now under the combined pressure, new atomic bomb and repeated attacks.” Uncle George, in a letter written about the same day, concurred.
Hardly anyone, likely even new President Truman, knew what this atomic bomb thing was, except that it was something unlike anything before. Aunt Jean enclosed in her letter a newspaper clipping with an optimistic quote from the U.S. War Department: “A revolutionary weapon designed to change war as we know it, or which may even be the instrumentality to end all wars, was set off with an impact which signalized mans entrance into a new physical world.”
No one really knew what we had unleashed, except, as Grandma said in her letter, “the old war is over”.
War had been shown to be hell. 407,316 U. S. war dead.
People doubtless knew others – estimated 50,000,000 altogether – had died in World War II.
But that astronomically larger loss was different. All that mattered was our tribe.
We don’t have the luxury of ignorance, now, over 70 years into the nuclear age. We can assure our own destruction.
Latest estimates from the Nuclear Threat Initiative (NTI)) are that the U.S. has 7200 nuclear warheads, and we are about to expend billions of dollars to upgrade them? Why?
May 18, 2016, NTI sent a survey. Included in their e-mail was this brief statement, recommending “The Partnership“, by Philip Taubman. The book tells the story of five American Cold Warriors — George P. Shultz, William J. Perry, Henry A. Kissinger, former Senator Sam Nunn, and Stanford physicist Sidney D. Drell–who stunned the world when they came together to announce their support for a world without nuclear weapons. The New York Times called the book “fascinating” and “haunting.” “
We face a simple choice: we can continue to relive and debate the nuclear war past, which ended in an instant in August, 1945, and base our policies and our endless arguments on the perceived need of nuclear retaliatory force.
Or we can show good example of another way, by ridding ourselves of the scourge of nuclear weaponry and other similar weapons of mass destruction.

The downing of the Egyptian plane over the Mediterranean May 19 may give us an opportunity. If it does turn out to have been a terrorist bomb planted somewhere on the planes last ill-fated days, what do we do to retaliate? Launch an atomic bomb? Against who?
Or do we come to our senses and figure out a new way to deal with threats of all kinds, some of which, like the atomic weapon, we created.
President Obama’s visit to Hiroshima will shine a light on a new path. I am thankful for that. 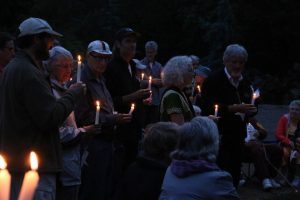 Monday, May 30: I watched the President at Hiroshima at 3:40 a.m. on Friday May 27, and was unable to attend the moving vigil in Minneapolis that evening (photo above).
The newspaper didn’t print my op ed, which is their right. My intent was and is to encourage civil conversation among unlike minds about the nuclear issue, and the destructive nature of war itself.
In my letter to the STrib I told only part of Grandma’s story. On July 2, 1944, the young GI in the picture at the beginning of this post (likely just home from Basic Training, before going to war), who lived perhaps three miles from their home, was a parishioner at the same country church in North Dakota, and was in school with her children, was killed in the Pacific: “Fri [Aug 18, 1944] we had a Memorial Mass for Francis Long killed July 2 on Saipan”, Grandma wrote to her son at sea.
Francis had left high school to go to war, not unusual in those days.
July 25, 1945, two weeks before the Bomb, Grandma noted in a letter to her son at sea, that her nephew, next farm over, Marine Captain August Berning, “had a bad battle [on Okinawa] got shot through his jacket”, though apparently not injured.
Everyone was on edge. World War II and death from war was not far away from her farm. It was not far away from anyone, anywhere.
My friend, Lynn Elling, missed President Obama’s speech last Friday: he died Feb. 14. I know what he would say to me and others. The phrase I most often heard from him was that we are at “an open moment in history” to achieve peace, and I agree with him.
Lynn visited the Peace Memorial Park at Hiroshima the year it opened in 1954. His peace moment came early in his two years as a Naval officer in WWII when he saw Tarawa Beach a short time after the horrors there, Nov. 20-23, 1943: Lynn U.S. Navy001. I think he would have been pleased with both the presence of the President at the Memorial, and the tone of the proceedings May 27.
You build bridges by direct engagement, and in steps.
In our polarized U.S. we tend to build walls, choosing confrontation with or detachment from those with differing points of views. We cannot survive in our own personal or interest group silos, much less with bombs in silos everywhere.
We need to look forward, not look backward, or engage in theorizing (as, “the bombs saved 200,000 lives….”) or such.
Still, the Bomb did happen. We still possess thousands of warheads, for no good reason. This world will not survive with nuclear powers. It is our responsibility to change the course, the conversation, not those folks over 70 years ago.
The road to peace is through all of us, one act of peace at a time.
Watch closely, the evidence is there, that more and more of us are getting that message.
Here’s to positive engagement.
A directly related post from my friend, Peter Barus, yesterday, is here.
What has been the human cost of war for the United States? Back in March I put together a graphic which simply speaks about American deaths in war. You can see the single page here (click to enlarge). Of course, this barely scratches the surface, not including injuries, dislocation, and on and on, but gives an idea. War is not a video game. 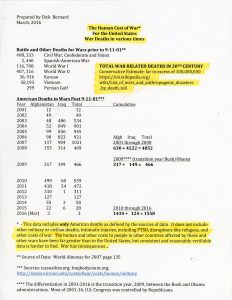 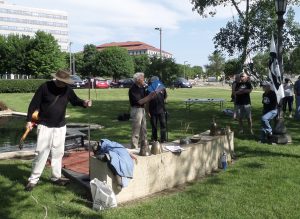 Convenor and Vietnam vet Barry Riesch opens the 2016 Vets for Peace Remembrance for Memorial Day, 2016. This years event lasted over an hour and attracted what appeared to be about 150 people. 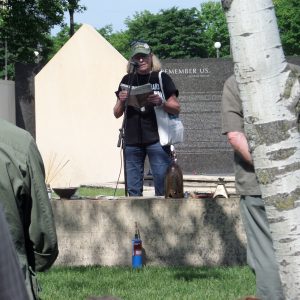 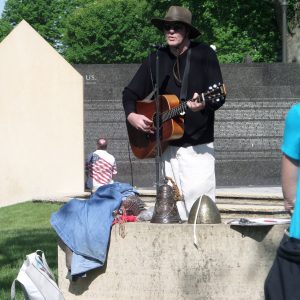