NOTE: November 25, 2016: The Dec. 7, 2016, post will include a link to this post, and more information relating to the 75th anniversary of Pearl Harbor. Directly related post here.
PRE-NOTE: I have written often, here, about the death of my Uncle Frank, my Dad’s kid brother, on the USS Arizona at Pearl Harbor, and how there was an unexpected family reunion – one I attended, as a one year old – in Long Beach CA less than five months before he died. Here and here are two related posts about this.
Dec. 7, 2014, at Landmark Center in St. Paul, I shared a small part of my own family story at a commemoration of December 7, 1941. A summary of what I said follows below, at “Pearl Harbor, a Family Reunion”. More details can be read here: frank-bernard001
The Wallet.
A month ago a mystery envelope appeared in our mailbox – the small packet from Scottville MI was postmarked Nov. 6, 2014.
It was from a cousin of mine, and when I opened the envelope the content was an old leather wallet (photo below, click to enlarge all photos). 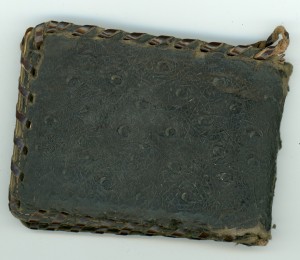 It was very fragile, this billfold (another name for wallet). I was curious.
There was no money, but plenty of paper, all of which I removed. The Identification card said the wallet belonged to Vincent Busch, Berlin, N. Dak. Vincent is my Uncle, who I’ve spent a lot of time with especially this past year. Below are the entire contents of the Wallet. 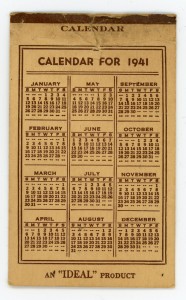 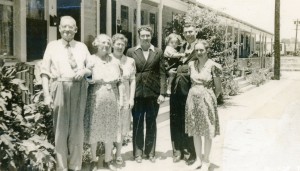 The family members in the story are, at right: Richard, Henry and Esther Bernard. From left, Henry and Josephine Bernard, Josie Whitaker, and Frank Bernard, Henry’s parents and siblings, in Long Beach.

Summary of remarks made at Landmark Center, Dec 7, 2014
I am one of very few Americans today who can honestly say they actually physically met one of those killed aboard the USS Arizona, Dec. 7, 1941. My last meeting with my Uncle Frank Bernard was at the end of June, 1941, five months before he died. I was one year old. I have the photo to prove it (above)!
The constellation of each and every victim that fateful Sunday, carry their own stories, in various ways.
Here’s some fragments of mine.
Frank served on the Arizona for six years. He was a shipfitter. Getting in the Navy was an accomplishment during the Depression. He seemed headed for a career in the Navy, but then there’s that letter he typed aboard the Arizona on “Nov 7 1941” (a Friday) where he asks his brothers advice: “I think I will get hitch to that little girl up in Washington she is a honey…what do you think of that…?”
I don’t know when that letter arrived back in ND. Neither do I know where the letter was written. From 27-31 October 1941 the Arizona was dry-docked at Pearl Harbor, and subsequent records went down with the ship.
Then, there’s a family picture I have, taken in late June, 1941, at Long Beach CA, of the entire family – there were 7 at the time. On the back of the photo Grandmother later wrote “the first time we had our family together for seven years and also the last.” It says it all. (The reunion was a surprise. No one expected the Arizona to pay a call at San Pedro, just down the coast from Long Beach.)
Forty years later, in 1981, Dad wrote a long and comprehensive history of his life and gave it to me. Ten years later, I was preparing a book of memories to give him on the 50th anniversary of Pearl Harbor, and found in that history which he had written, not a single word about Pearl Harbor. This is how repressed memory works (or doesn’t work).
On the other hand, my parents next male child, born in Nov. 1945, was named Frank Peter, doubtless in memory of Dad’s brother.
I asked Dad about the missing memories. My folks had a battery operated radio but Dad recalled that on December 7 they were not listening to the radio. The first word of the bombing at Pearl Harbor was received when [a colleague teacher] returned …late in the afternoon.
“During the week following the attack it was first announced that John Grabinski, a sailor from Grafton and Frank’s friend, had been killed. It was only later in the week that it was learned that John Grabinski was safe, but that Frank Bernard had been killed aboard the Arizona.” (Mr. Grabinski lived into his mid-80s, much of his later years in Arizona.)
Of course, the early chaos brought no news of who had died. A high school student in Dad’s class recalled years later that “I don’t remember us ever talking about [Dad’s brother] losing his life from the Japanese attack.”
The family did not get together, and to my knowledge there was no memorial service, or funeral. My grandparents, of Grafton ND, were in Long Beach; their daughter was in Los Angeles, and my parents were in rural North Dakota.
There was nothing much that could be done.
Many years later, a relative of mine found a very long article in the Grand Forks Herald of February 17, 1942, and sent it to me. It was about a North Dakota picnic in Los Angeles (in those days, state picnics were major events, attended, sometimes, by thousands). Reference was made to a talk by the Polish Consul in Los Angeles, in which he remembered “a young man of Polish descent at Pearl Harbor, the young man being a native of the Grafton area.”
The article continued: “When he had finished reading a man and his wife arose in the audience, the man asking if he might interrupt for just a moment…the man said the report of that boy’s death later was found to be in error, but that the man actually killed at Pearl Harbor was the pal of the boy mentioned in the first report. “The boy killed,” said the man, “was our son!” The couple standing were Mr. and Mrs. Henry Bernard, long time residents of Grafton. The entire audience arose and stood in silence for a moment in honor of the dead hero and the parents who made the sacrifice.”
There are no winners in war. Let us not forget. 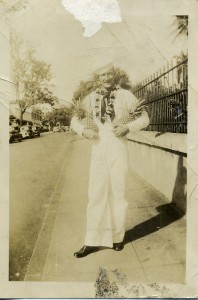 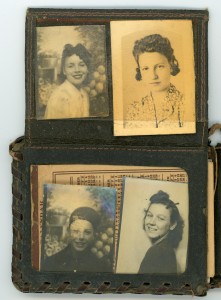 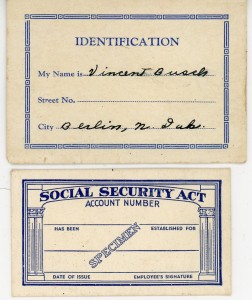 Finally, the rest of the contents spilled out. Here they are, speaking powerfully for themselves (look for and note, especially, the name Francis Long): Busch Vince Wallet004
I surmise that this wallet was a Christmas gift to Uncle Vince in 1940, probably from his parents (he would have been 15, then). The assorted photos and cards are classmates including his 12 year old brother, Art, a couple of nearby cousins, Anita and Melvin Berning, and other classmates from the Berlin High School. There were also some Gas Ration cards from WWII. There are two photos of Art, lower left of the four visible photos above, and at the top of the first pdf page.
Vince and Art shared a tiny little room in the farmhouse until Art graduated from high school in 1945. The winter heat source was the furnace chimney which came through their room. Bedrooms were for sleeping, period.
If I’m right, that the wallet was new in 1940, it was probably in Vincents pocket when the below picture was taken on Mother’s Day, 1941, at the farm. 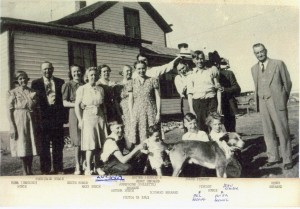 Vincent and Art and Anita and Melvin are the kids towards the right of the photo. Are left are Vince’s parents, my grandparents, Rosa and Ferd Busch; and interspersed are by parents Esther and Henry Bernard and my other Grandparents Josephine and Henry Bernard, down from their home in Grafton ND.
This was a peace-time photo, at least in the United States.
Seven months after this picture, December 7, 1941, the Bernards youngest son, and my Dad’s brother, Frank, went down with the USS Arizona at Pearl Harbor. We last saw him in late June in Long Beach, apparently a surprise visit as the Arizona was in port at nearby San Pedro. Every American instantly became a part of America and the World’s most deadly war, till now.
In the wallet, there’s the card for Francis Long, a neighbor and school mate of Vincent.
On Thanksgiving I showed Vince the wallet and its contents, and I also showed him parts of some of the many albums his family kept over the years.
In the collection was this photo: 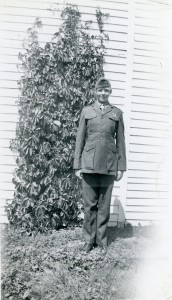 Francis Long, probably spring or summer 1944. He was apparently killed in action shortly after going on active duty.

“Who’s that?” “Francis Long”, he said.
Francis went off to WWII. Apparently shortly after he went to the Pacific theatre, things went wrong. August 20, 1944, Grandma wrote a letter to another son, George Busch, a naval officer on a Destroyer in the Pacific Theatre, and said this: “Fri we had a memorial Mass for Francis Long killed July 2 on Saipan in action….” (This photo was developed by Brown Photo, Minneapols, Oct 5, 1944. In those years, few pictures were taken, and it often took a long while to finish off an 8 or 12 exposure roll.)
War is never a solution, but for some reason we persist in our insanity that it is possible to kill off our enemies, and thus achieve piece. We are all “enemies” to somebody, somewhere. Let’s change the conversation.
https://thoughtstowardsabetterworld.org/wp-content/uploads/2022/04/thoughts-300x138-1.jpg 0 0 dickbernard https://thoughtstowardsabetterworld.org/wp-content/uploads/2022/04/thoughts-300x138-1.jpg dickbernard2014-12-07 06:00:372014-12-07 06:00:37#967 – Dick Bernard: The Wallet, Pearl Harbor Day, 2014