Today, even more so than most, will be a frantic, “CYA”, day in Washington D.C. when the long expected Senate Committee report on the U.S. and the practice of Torture during the Iraq years is released. My favorite blogger summarizes the chatter as it gathered yesterday here.
Everyone will have their own opinion. Mine borrows an old farm phrase: “the chickens come home to roost”. Our willful reinterpretation of things like the Nuremberg Principals and the Geneva Accords to justify torture basically destroyed our credibility in the world. In the wake of Iraq, we cannot pretend to be innocent purveyors of only good.
Last night I went to hear our friend Annelee Woodstrom talk to 35 very attentive Friends of the Southdale Library about her book, “War Child, Growing Up in Adolf Hitlers Germany“. Full disclosure: we have been good friends of Annelee since I first read of her book being published back in 2003; I was privileged to edit her second book, Empty Chairs; I’ve heard her talk several times; this morning, a little later, we’ll drive her home to northwest Minnesota, and spend a few days with her. She and her story are no stranger to me.
Through no fault of her own, Annelee grew up in Adolf Hitler’s Germany, her home from her birth in 1926 till she left the country in 1947 to become an “enemy alien” in the United States, marrying the “Gentleman Soldier” from Crookston MN who she and her family met when the U.S. Army liberated her town of Mitterteich.
She saw it all through a young persons eyes: the desperation of the Germans, humiliated by the Treaty of Versailles at the end of WWI; the promises, made and fulfilled by a charismatic German, Adolf Hitler, and his Nazi party; the beginnings of the persecution of the Jews (there were two Jewish families in her Catholic town of 6,000, and both survived the war, though they disappeared for a long while); having to drop out of school to go to work in a telegraph office in a city 95 miles from her home; experiencing the bombing, and at the end, walking 95 miles home – an 8 day trip – sleeping in ditches, starving, when all was lost.
Through it all, Annelee describes, from personal experience, why the horror of Nazi Germany could happen. It has never been a great surprise to me. People then, there, were like people here, now. Somebody promises a better life, a convincing message and some fulfilled promises make a better life possible, when the promise “goes south” it is too late….
Annelee, as a young girl, wanted to be part of Hitler Youth. It looked like fun. Her parents refused to allow her to join. 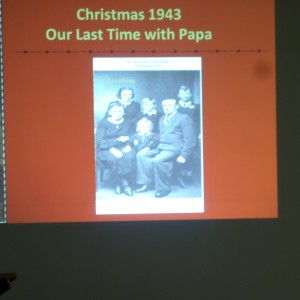 Privilege went to party members: her Dad refused to join and ended up drafted into the German military system, ending up dying somewhere in Siberia, they think. There is no grave to visit….
For Annelee, personally, the key dates are 1939, when she was required to leave school and go to work; and 1943, when the momentum of the war shifted, and the national mood went from optimism about winning the war, to questions of survival.
If one looks at things like politics from the perspective of an innocent civilian, as Annelee was, one sees how families, communities, and finally countries can run amuck.
In the desperate times, people want a promise of hope; in good times, they gravitate to whoever can bring them the goodies; in the bad times, they get desperate, and by then are frozen out of the decision making process, afraid even to be honest within their own families.
Survivor of the remnants of the Thousand Year Reich, Rev. Martin Niemoeller, used to speak a lot about what the Germans learned from their experience. His message varied a tiny bit from speech to speech, leaving scholars to seek the actual origins of what he actually said, but this is the essential quote:
“First they came for the Socialists, and I did not speak out—
Because I was not a Socialist.
Then they came for the Trade Unionists, and I did not speak out—
Because I was not a Trade Unionist.
Then they came for the Jews, and I did not speak out—
Because I was not a Jew.
Then they came for me—and there was no one left to speak for me.”
Thank you, Annelee. 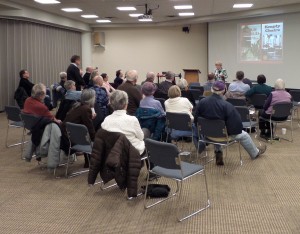