NOTE: Peter is a longtime great friend from rural Vermont. He is an occasional and always welcome visitor at this space. On May 22, he had an opportunity to hear journalist Amy Goodman in Troy, New York. His comments follow, with his permission.
(click to enlarge) 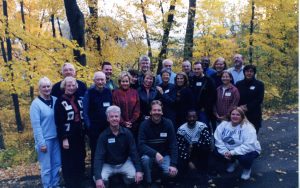 Peter Barus:
May/22/2016
Amy Goodman spoke last night at the Sanctuary for Independent Media in Troy, NY, a lovely little old converted church. Arriving early, I strolled around the block in this economically by-passed neighborhood of old houses, grand old churches, and grinding poverty. A local church still retains its original Tiffany stained glass windows, and the Troy Music Hall is world-famous for extraordinary acoustics. I found that the Sanctuary for Independent Media is very active in the immediate community. At one end of the block is a little park, with an outdoor stage, built by (and commemorating) local artists, craftspeople and community groups. The back of the stage is a wall of intricate mosaic made by many hands. There was chicken being cooked for the $100 a plate dinner, and while I was standing around, a little car parked, and out stepped Amy, with two or three friends. We all walked around the little park while one of the Sanctuary’s leaders explained the history of this little patch of green in the city. There is a community garden at the other end of the block, and inside the Sanctuary is a 100-watt FM radio station that broadcasts Democracy Now! along with music and community affairs programming.
After supper Amy spoke to a packed house in the high-ceilinged former church. Soon everyone was listening as if sitting across the kitchen table with Amy, as she reported on the 100-city tour she is completing with her book.”Democracy Now!: Twenty Years Covering the Movements Changing America” by Amy Goodman, David Goodman, and Denis Moynihan. Her speech covered almost the last four decades of peace, justice, civil rights action, from an eye-witness perspective only she can provide. The connections, the people and events, touched my own life at more points than I’d ever realized. Her stories are moving and the raw truth of them is immediate and inspiring. They seem to have a common thread, of ordinary people acting in admirable and selfless ways, without a moment’s hesitation, in the face of systematic oppression, violence and injustice. And it seems that this is how human beings normally act in such circumstances – media depictions to the contrary notwithstanding.
One important message is that the media have almost no connection to direct human experience, and politics is covered in proportion to political ad revenues. Punditry demands no actual knowledge of the facts. This is why, for instance, we rarely hear what Sanders actually says, much less in his own voice. Instead we are treated to speculation about violent “followers”. This major Presidential candidate has been “vanished” from the airwaves. The night the Republicans ended up with a “presumptive nominee”, that individual got coverage of an empty podium at one of his mansions, captioned “to speak soon!” while his rivals’ concession speeches, some Hillary sound bites, and zero mention of Sanders droned on. Sanders was at that time addressing an audience of tens of thousands in Arizona, by far the largest actual news event, and the cameras were pointing at an empty platform.
Amy brought stories of a real and very large movement, the same one we are constantly told ended successfully when Obama was elected, It is the current generation’s Civil Rights movement. Occupy Wall Street is part of that, Black Lives Matter is part of that. The many anti-war demonstrations that go almost totally unreported are part of that. The Sanders campaign is part of that. And the real, and unreported, question today is whether the corporate media will manage to keep enough of us distracted, resigned, apathetic and cynical while the forces of blind capitalism complete the looting, militarization and ultimately the destruction of our only planet.
The corporate media are simply ignoring that ubiquitous and vital public conversation. The stakes seem high. As I listened to Amy speak, it became clear that it’s not about choosing “sides” in some mythical epic struggle between good and evil, war and peace, much less “Republicans” and “Democrats”; it’s about discovering one’s own commitment, and whether it is to mere personal avoidance of pain, or to aliveness and possibility for all people, everywhere. To climbing the mythical Ladder of Success, or being of some actual service in making a workable world while we’re in it together.
Amy Goodman is a walking demand that we struggle with this question, for ourselves. Get with “people like us, and not like us,” she says, and express your own experience honestly, and listen honestly to theirs. Instead of accepting the false dichotomies and slogans and polls, endless polls, that pour out of the media echo chamber, take your part in the conversation that matters.
Peter
COMMENT:
from Dick: Great post from Peter. I most resonate with the last paragraph.
Each time I hear the conversation about who has the power I think back to a thirty years ago talk, about 1987, about “Referent Power” – how much we have, and how ineffectively the left uses it. Referent Power? Here. Scroll down a little ways. Developing positive relationships with someone who sees some things differently is crucial to making positive change. Relationships are not easy. They are crucial.
https://thoughtstowardsabetterworld.org/wp-content/uploads/2022/04/thoughts-300x138-1.jpg 0 0 dickbernard https://thoughtstowardsabetterworld.org/wp-content/uploads/2022/04/thoughts-300x138-1.jpg dickbernard2016-05-29 12:51:052016-05-29 12:51:05Peter Barus: A Talk By Amy Goodman
0 replies