Now and again in our growing up years we made it up to Grafton ND to visit Grandma and Grandpa* Bernard, who lived in a tiny house at 738 Cooper Avenue.
Grandpa, 68 when I was born, and 85 when he died, was a most interesting character, starting life in Quebec on a farm, then an asbestos miner at Thetford Mines QC, thence a lumberjack, a carpenter, and finally chief engineer of the Flour Mill in Grafton (he came from a line of probably hundreds of years of millers in France and thence in Quebec. His brother, Joe, was chief miller in Grafton.)
This particular day, Grandpa was sitting on his accustomed perch on the front stoop, basically exactly as shown in the old photo:
(click to enlarge photos) 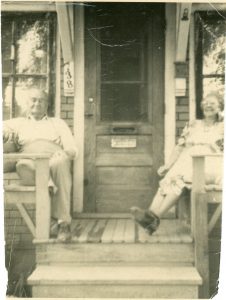 I don’t recall Grandma being there, but we kids were, and at some point Grandpa looked over his shoulder and saw a dog trotting down the sidewalk.
“See that dog?”, he said. Then he picked up his homemade slingshot, and fished a pebble out of the nearby can and made sure the dog saw it.
No word (nor bark) was spoken.
The dog kept coming till some invisible “do not cross” line; at that point, making a hard right, trotting across the street; hard left past Grandpa; and on about whatever business the dog was about that sunny day.
Grandpa loved dogs, best I know, but there was a time and a place for everything, and apparently this neighbor had to be reminded, now and again, of the rules of the road at Grandpa’s house.
The parties understood the rules….
There are endless Grandpa (and Grandma) lessons conveyed to us, as we all know, once past a certain age. Things we just soak up, without realizing it at the time.
Not all the stories were conveyed directly, or even intentionally. For instance, across the alley from the tiny house was the Walsh county yard where things like snowplows and other public machines were kept. And down the street was the Courthouse, and the local Jail….
And there was the annual event at the Courthouse where the last remaining veterans of the Spanish-American War had an annual remembrance of their fallen comrades. It was always impressive and Grandpa was always in it.
There was something else about Grandpa, which you can see in the picture.
He had one leg.
The other he had lost to diabetes in 1946. Since he was a veteran, that leg was amputated at the VA Hospital, in Fargo; as was the second, at the time he died in 1957.
He used to entertain we kids with the stub of the missing leg.
Over time, I’ve come to learn that he lived to entertain us because a government agency, the VA, had saved his life; and Social Security, enacted about the time he turned 65, was what they had for retirement. His source of livelihood, the Flour Mill, had gone out of business on short notice right before the stock market crash in 1929; and at almost exactly the same time, the bank with nearly all their savings, went under due to fraud.
Overnite they went from regular middle class to dependent on others. It was the year Dad graduated from high school, and, of course, his plans on going to the University of North Dakota were dashed.
Of course, if there’s a grandpa, there’s a grandma.
Just yesterday I came across an old photo of my other grandmother, Rosa (Berning) Busch, with the Ladies Aid of Berlin North Dakota in September, 1946 (See below). Grandma is the lady kneeling in the front row at the center of the photo.
There are lots and lots of Grandma stories, as well as Mrs. Busch stories, even to this day.
No extra stories to be conveyed here, but an encouragement to remember your own, about those who came before you.
And to emphasize what is no longer often seen as obvious: we like to think we are, as individuals, in charge of our own universe.
What our ancestors knew, imperfectly, was that we all do better when we all do better. 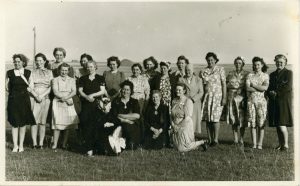 * There exists, to my knowledge, a single film clip recording Grandpa Bernard and others “sidewalk superintending” in Grafton ND in 1949, when a crew was paving the Main Street. His moment of fame come at four minutes 15 second mark. You can view it here.
Of course, we all have two sets of grandparents, whether we got to know them or not. And there are all manner of other relationships which would take a long writing to describe in any detail…for each of us in our own lives.
In my own case, Grandpa Bernard died almost exactly on my 17th birthday, in 1957; Grandma Bernard died near my 23rd birthday, in 1963; Grandpa Busch died in 1967, less than two weeks after their 62nd wedding anniversary, coming up the stairs from the basement with some eggs for breakfast; Grandma Busch died in early August, 1972, at 88. Lore has it that she lingered on long enough so that her youngest son, my uncle Art, could make it from Chicago. He did, and she died very soon thereafter.
https://thoughtstowardsabetterworld.org/wp-content/uploads/2022/04/thoughts-300x138-1.jpg 0 0 dickbernard https://thoughtstowardsabetterworld.org/wp-content/uploads/2022/04/thoughts-300x138-1.jpg dickbernard2016-06-05 13:33:572016-06-05 13:33:57#1134 – Dick Bernard: Grandpa Bernard's Can of Pebbles
0 replies