About 40 of us gathered at the Gandhi Mahal Retaurant last evening, May 1, to Reflect On World Peace Through Law.
The event was one of those that just came together; in this case, less than three weeks. Law Day has been a part of the American tradition since at least 1958, when President Eisenhower proclaimed it, and in fact Law Day was made part of U.S. Law in 1961.
Of course, May 1 has many different emphases:
There is the annual May Day Parade in South Minneapolis, both serious and whimsical – we often attend: (This year it is Sunday May 5). I highly recommend it.
As a Catholic kid in the 1940s, I remember May Day for May Baskets, and “Mary, Queen of the May”; May Day is a long-time international Labor Day. In the Communist days in the USSR and the Soviet bloc, May Day was a day to parade out military hardware in huge parades….
I suppose someone knows exactly why President Eisenhower proclaimed Law Day for May 1, 1958. My personal speculation is that the proclamation had something to do with the successful launch of Sputnik by the USSR in October, 1957. There needed to be a counter to the Soviet May Day.
Whatever the reasons, competing themes give an opportunity to fight over what May Day is or should be…
The May 1 event I was part of was an opportunity to reflect on World Law and its relationship to Peace.
As best as I can tell “World Law Day” has been a particularly Twin Cities interpretation of Law Day (and a most relevant interpretation).
May 1, 2013 evolved into an opportunity to honor the contributions of our elders who possess much accumulated wisdom.
World Law Day was formally celebrated in Minneapolis-St. Paul from at least 1964 through 1996, and was largely the creation of several persons, including Lynn Elling. (page four of the 2013 program has a timeline: Law Day Prog May 1 2013001
David Brink (93) former President of the American Bar Association was our speaker May 1; an impromptu decision was made to call the event the “1st Annual Lynn and Donna Elling Symposium on World Peace Through Law.” Donna passed away in June, 2011, but Lynn, at 92, was there, less than 24 hours returned from two weeks in Vietnam with his adopted Vietnamese son, Tod.
(click on photos to enlarge) 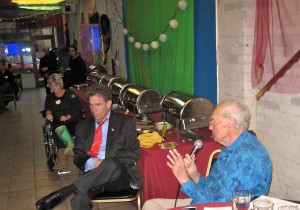 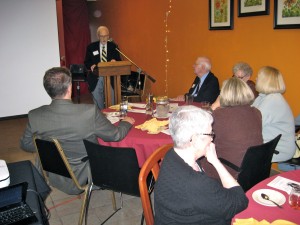 Elder Rev. Lyle Christianson introduced Mr. Brink; Rev. Lowell Erdahl and Joe Schwartzberg, other prominent elders in the peace and justice community were in attendance, and an in-preparation film about World Citizen Garry Davis, 92, and ailing was screened after the event.
If there is to be a “2nd Annual” World Law Event on May 1, 2014 (it’s a Thursday), will depend on the interest of those who attended May 1, and others whose interest may have been stimulated by two commentaries in the May 1, Minneapolis Star Tribune. The commentaries, by Joe Schwartzberg and Jim Nelson, lay out the history and in effect the case for a continuing World Law Day.
Take the time to not only read the commentaries, but to add your own comment. And get active.
Where do you stand?
And if you’re a Twin Citian, consider giving Gandhi Mahal some of your business. They are serious about community orientation (and an excellent restaurant, too!) 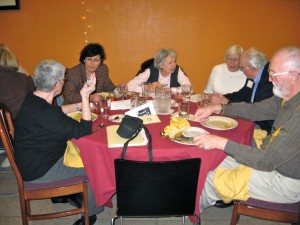 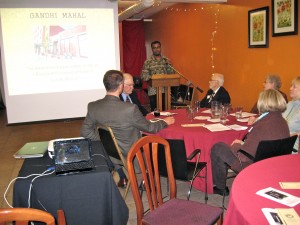