Dr. Schwartzberg video interview on his career as peacemaker, filmed May 13, 2014, at his office at the University of Minnesota
January 18, 2014: Post about Joe Schwartzberg’s new book, Transforming the United Nations System
November 9, 2013: See important update at the end of this post.
Related: See Joe Schwartzberg Affirmation of Human Oneness here.
In early February, 2013, I came a little late to a Board meeting of GlobalSolutionsMN.org. On the conference table were some slices of pie, purchased at a grocery store deli. This was an unusual addition to our meeting.
Chair Joe Schwartzberg soon offered us a piece of pie, to mark his 85th birthday, which apparently was some days earlier.
It was one of those nice touches you tend to remember about a person. We sometimes lose sight of that in this time of recognition of power, expertise, wealth, and other such measures of one person having achieved a pinnacle.
A piece of pie is good, too!
Dr. Schwartzberg – “Joe” to those who know him – chose an academic course, and he has achieved success there. March 24, 2010, at the University of Minnesota, he and three other professors were given the Award for Global Engagement 2009 which “recognizes faculty and staff for outstanding contributions to global education and international programs at the University or in their field or discipline.”

To his academic title of Professor Emeritus, College of Liberal Arts, was added the title Distinguished International Professor Emeritus at the University of Minnesota. Only ten professors at the University had previously been granted this honorary degree. The full text accompanying his recognition is included at the end of this post.
While Dr. Schwartzberg came to the Geography Department of the University of Minnesota in 1965, and I had aims towards a Master’s Degree in Geography in the same department in the late 1960s, Joe’s path and mine did not cross until I became involved with the Minnesota Alliance of Peacemakers (MAP) in 2002. Joe had long been involved in MAP.
Sometime after meeting Joe, came a package from him (which I still have), mailed April 17, 2003, which included materials about an organization in which he was active, World Federalists. I could agree with the basic tenets of the organization, and I joined, and I have remained a reasonably active member through its changes in names and structure to Citizens for Global Solutions to the present GlobalSolutions.org, the latter a deep bow to the internet age.
In the envelope was a book, PlanetHood, by Benjamin B. Ferencz and Ken Keyes, Jr. It’s a simple book with a profound premise “insist on your ultimate human right” which is “the right to live in a peaceful world free from the threat of death by nuclear war.” The book is worth reading and sharing and the credentials of the authors are substantial. It is non-copyrighted and downloadable at the referenced link above.
Also in the envelope was “An Affirmation of Human Oneness”, which I’ve come to know as Dr. Schwartzberg’s ‘mantra’:
“I am a member of the human family, a citizen of the world.
The achievements of men and women throughout the ages are my heritage.
My destiny is bound to that of all my fellow human beings.
What we jointly create forms our bequest to future generations.
May my life serve the god of my family.
May our use of the earth preserve it for those yet to come.”
In the Academic context, in addition to his important Historical Atlas of South Asia (see below), Joe published Revitalizing the United Nations: Reform Through Weighted Voting, in 2004.
A new book written by Dr.Schwartzberg has recently been accepted for publication by the United Nations University Press. [see Nov. 9, 2013,note at end of this post] Entitled “Transforming the United Nations System: Designs for a Workable World”, the work, according to Dr. Schwartzberg, “deals with just about every major component of the United Nations system, dealing mainly with decision-making, especially by weighted voting, and proposes literally dozens of specific reforms.”
But it is in the more work-a-day common person world that I have known Joe, and come to immensely respect him. That first 2003 mailing included “An Affirmation of Human Oneness” which was authored by Joe and has been updated and translated into many world languages. A quite current version of all of the languages is accessible here.
And until recently, if one went to a more major meeting for which Joe had responsibility, you’d see a series of laminated sheets hung around the room, as can be seen in this Facebook album.
Text about Dr. Schwartzberg from Award for Global Engagement Award Ceremony, March 24, 2010, University of Minnesota:
Dr. Joseph Schwartzberg has devoted his lengthy career to academic and global outreach as a scholar, writer, speaker, peace and justice activist, and committed world citizen. He is well known and respected for his scholarly approach to international problems and has made important contributions through his tireless research, writing and academic and policy outreach around the conflict of Kashmir He is the editor and principal author of the Historical Atlas of South Asia, which has been called the “definitive historical chronology” of South Asia. He is an ardent supporter of global education and has incorporated into his classes the insights and experiences derived from years of foreign travel as well as from literature focusing on global interdependence and innovations in institutes of global government His serve extends beyond campus, as an active member of the Kashmir Study Group, Citizens for Global Solutions, and the Minnesota Alliance of Peacemakers. 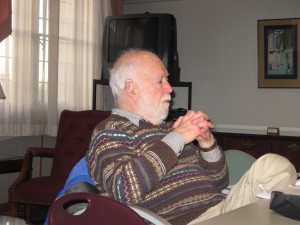 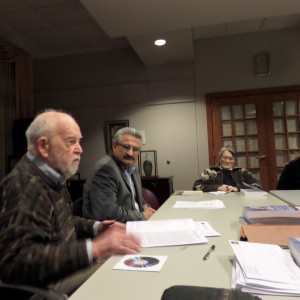