Personally, while I’ve not been a frequent visitor to D.C. I’d guess there have been more than a dozen trips there over the years, usually for several days, always visiting the federal area – an inspirational place for me.  The rest is editorial. 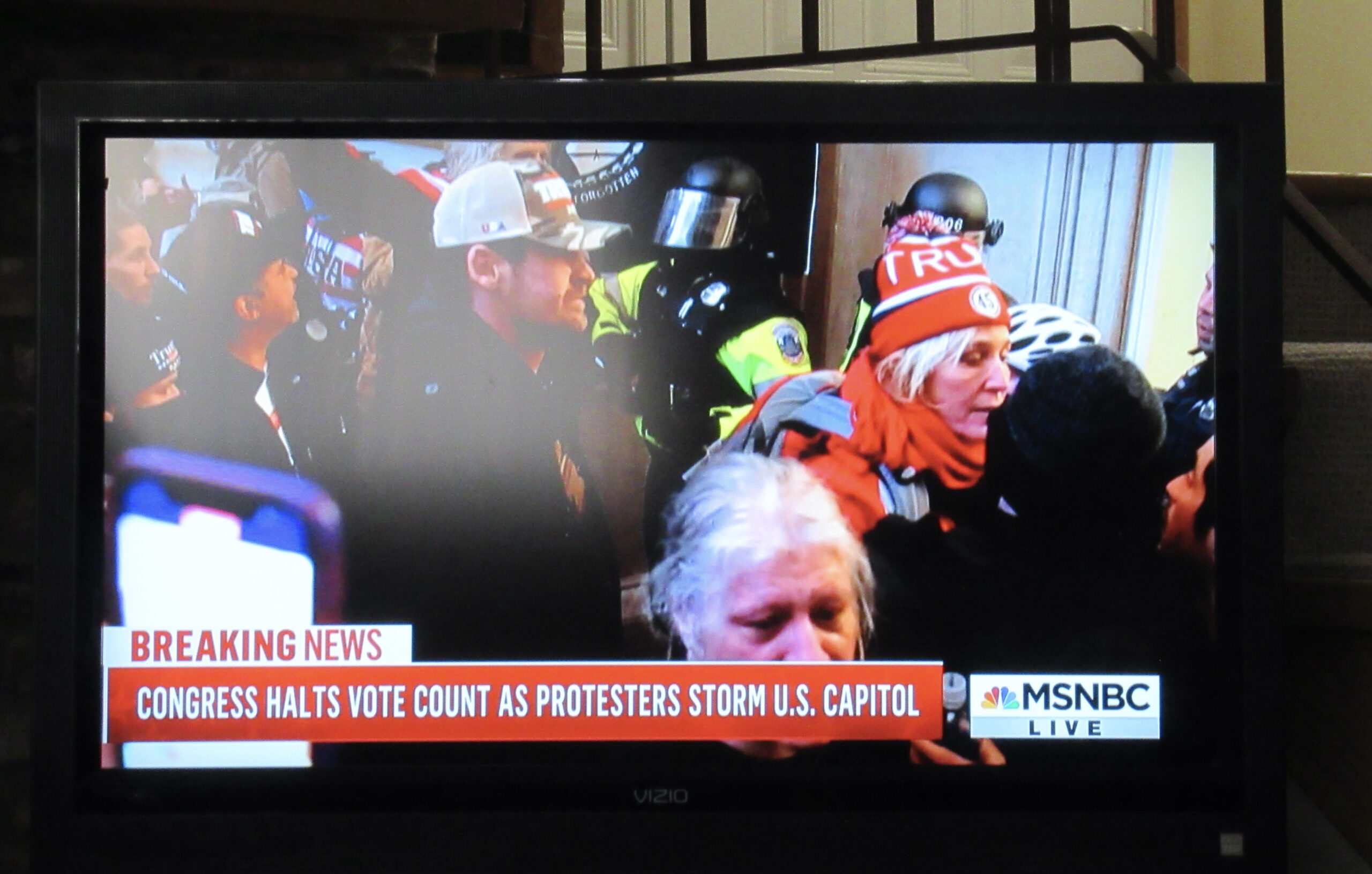 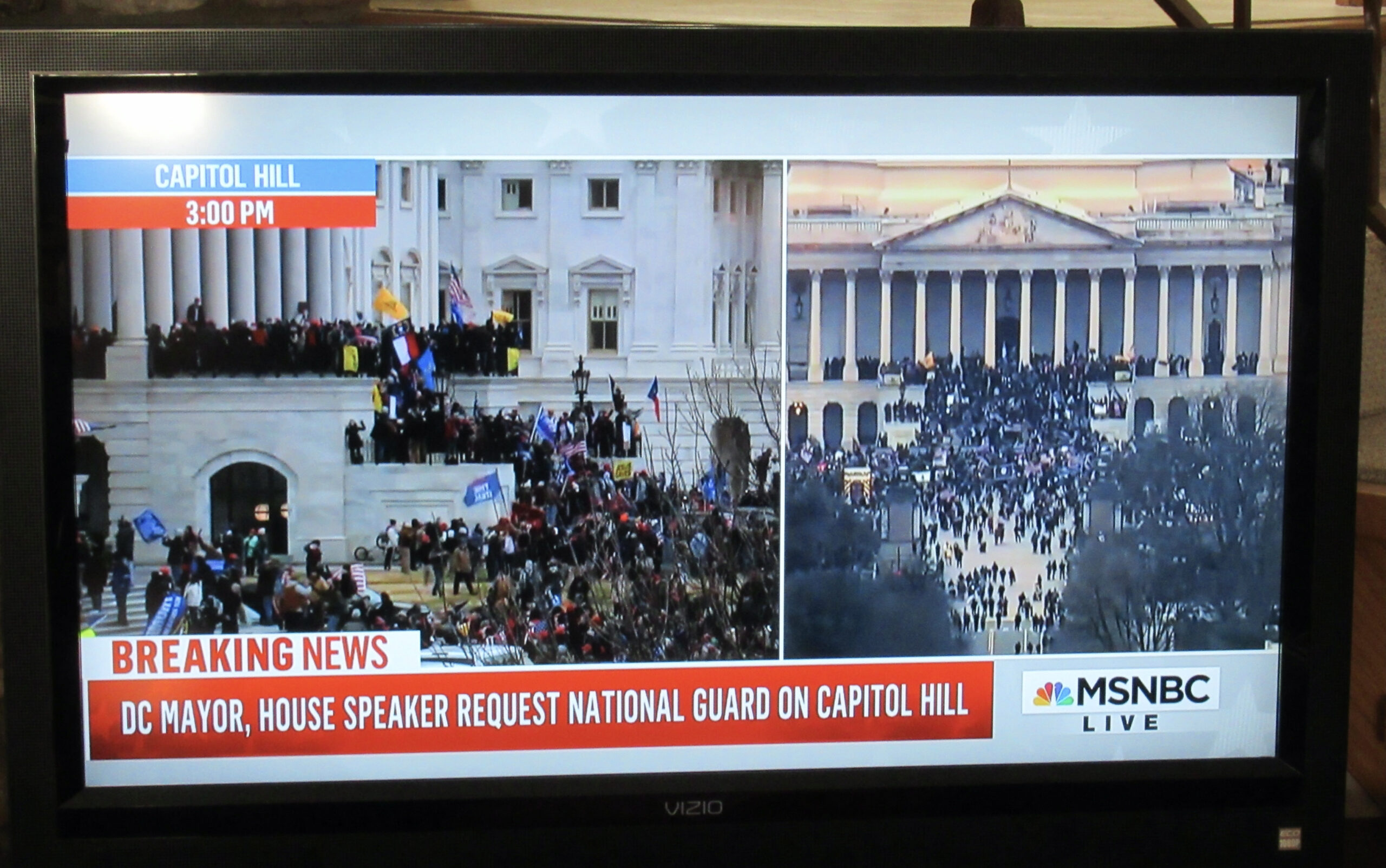 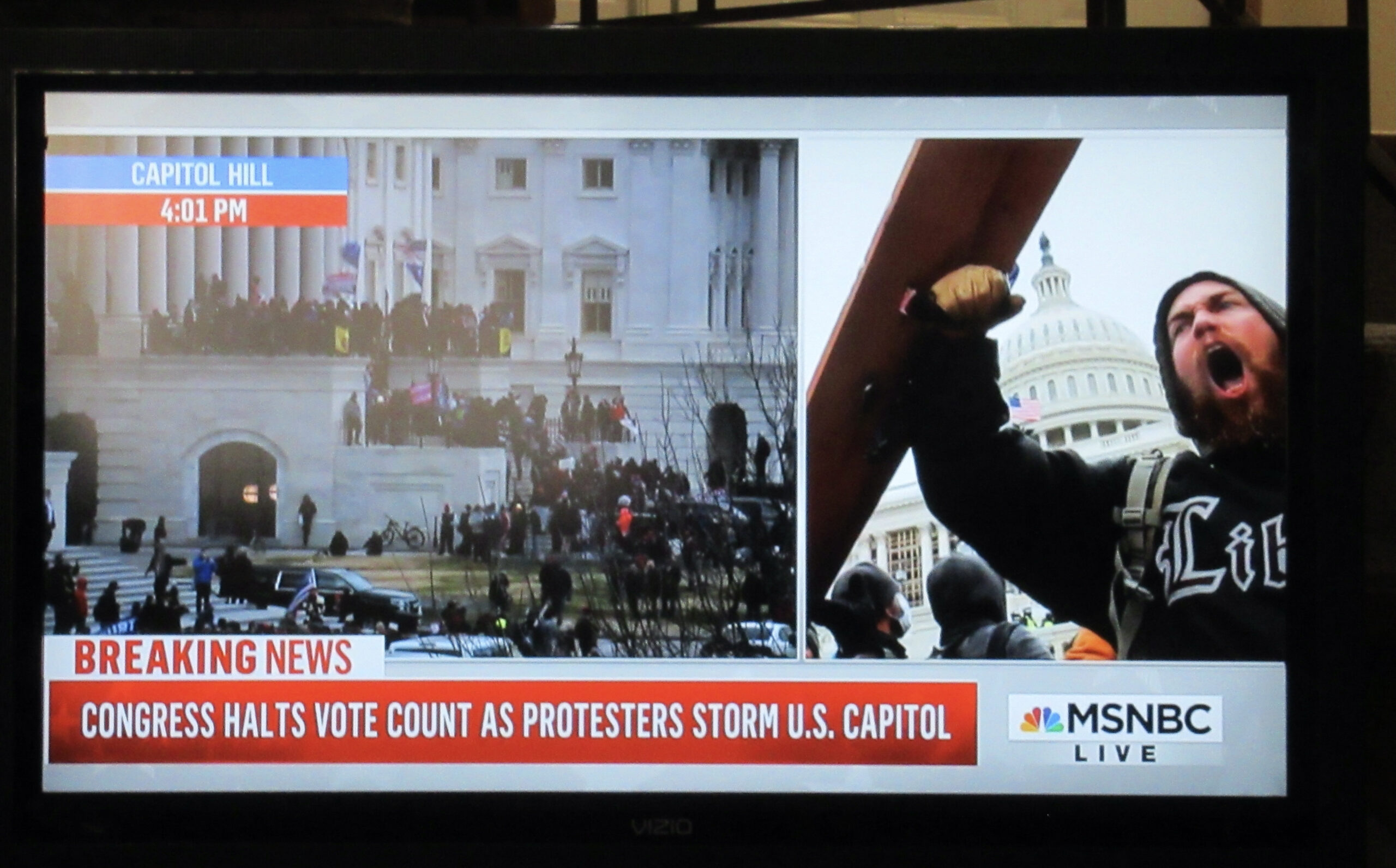 A snapshot from many years ago, probably 1970s about sunset, taken by myself on an early visit to Washington D.C.   It has hung on my home office wall for many years. 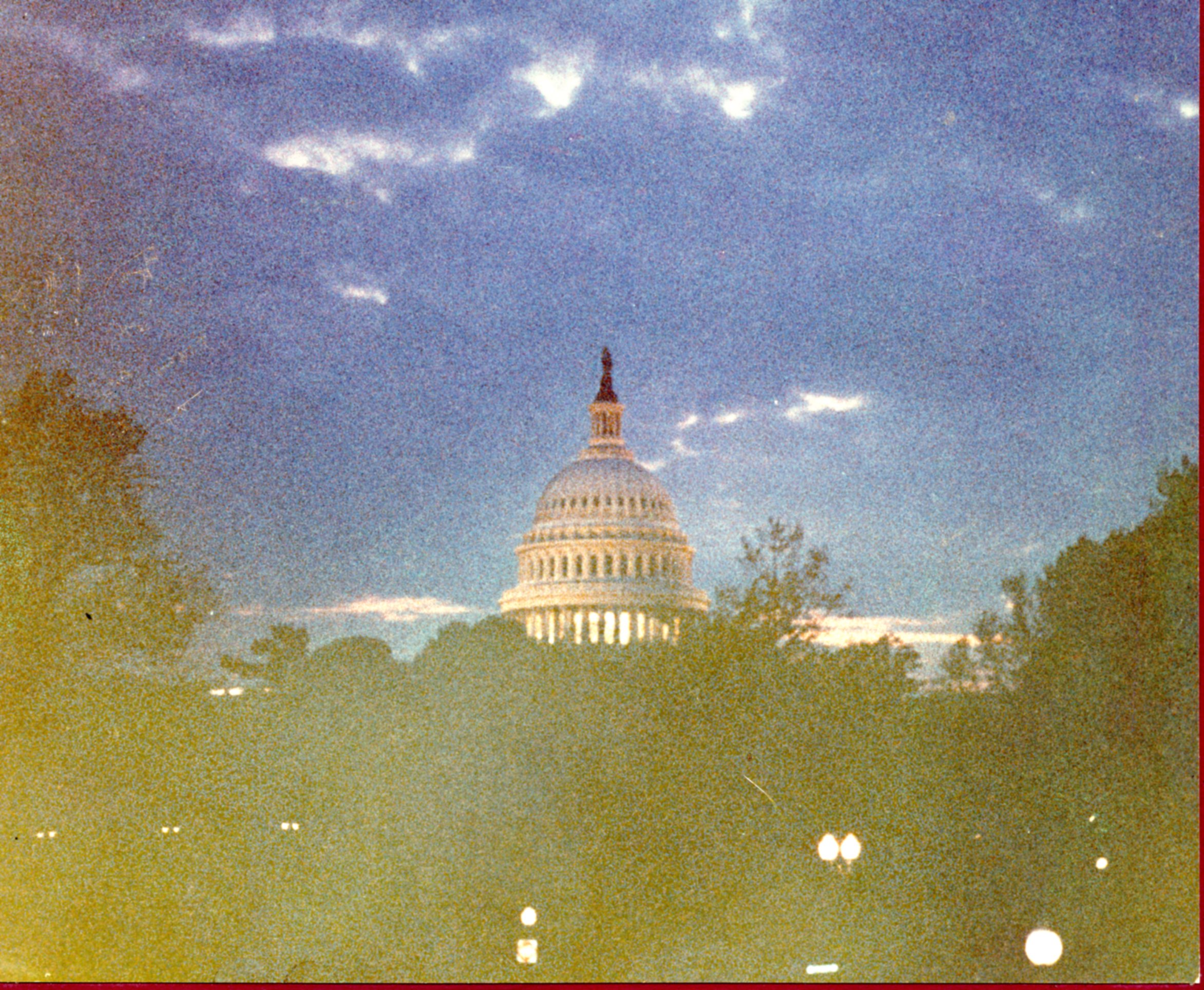 PRENOTE:  In previous recent blogs I have recommended an on-point film available on-line, which will be discussed in an on-line zoom call the evening of Jan. 17 (7 p.m. CST.  Details here (scroll down to Third Thursday Global Films ….)

from Jim: The US has been humiliated. And the world has lost much ground toward a just world peace.  Just one of the grave consequences of the Trump administration.  But we know the arc of history is not smooth.

from Laura:  Sad as can be, Dick. My heart hurts. 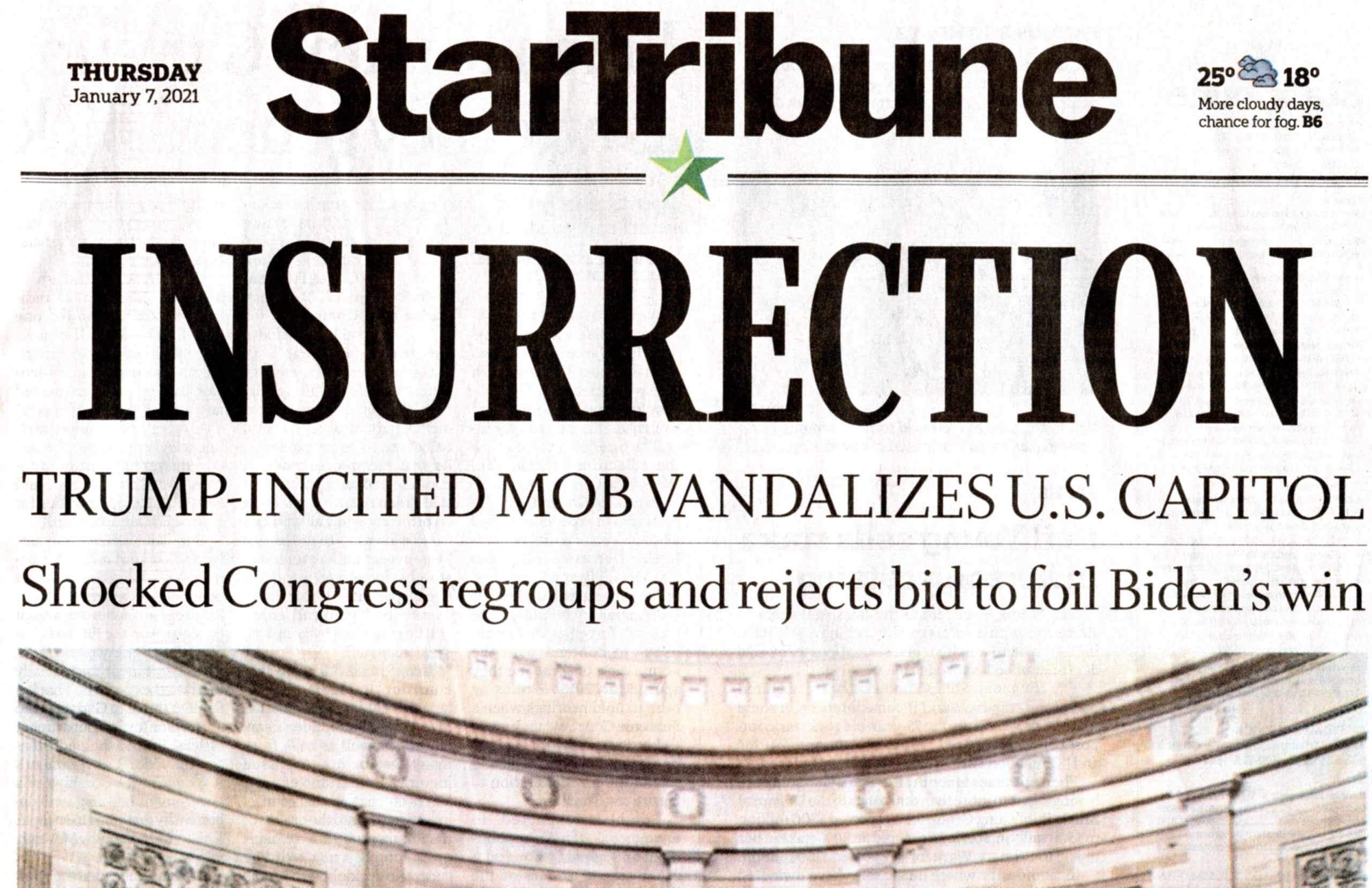 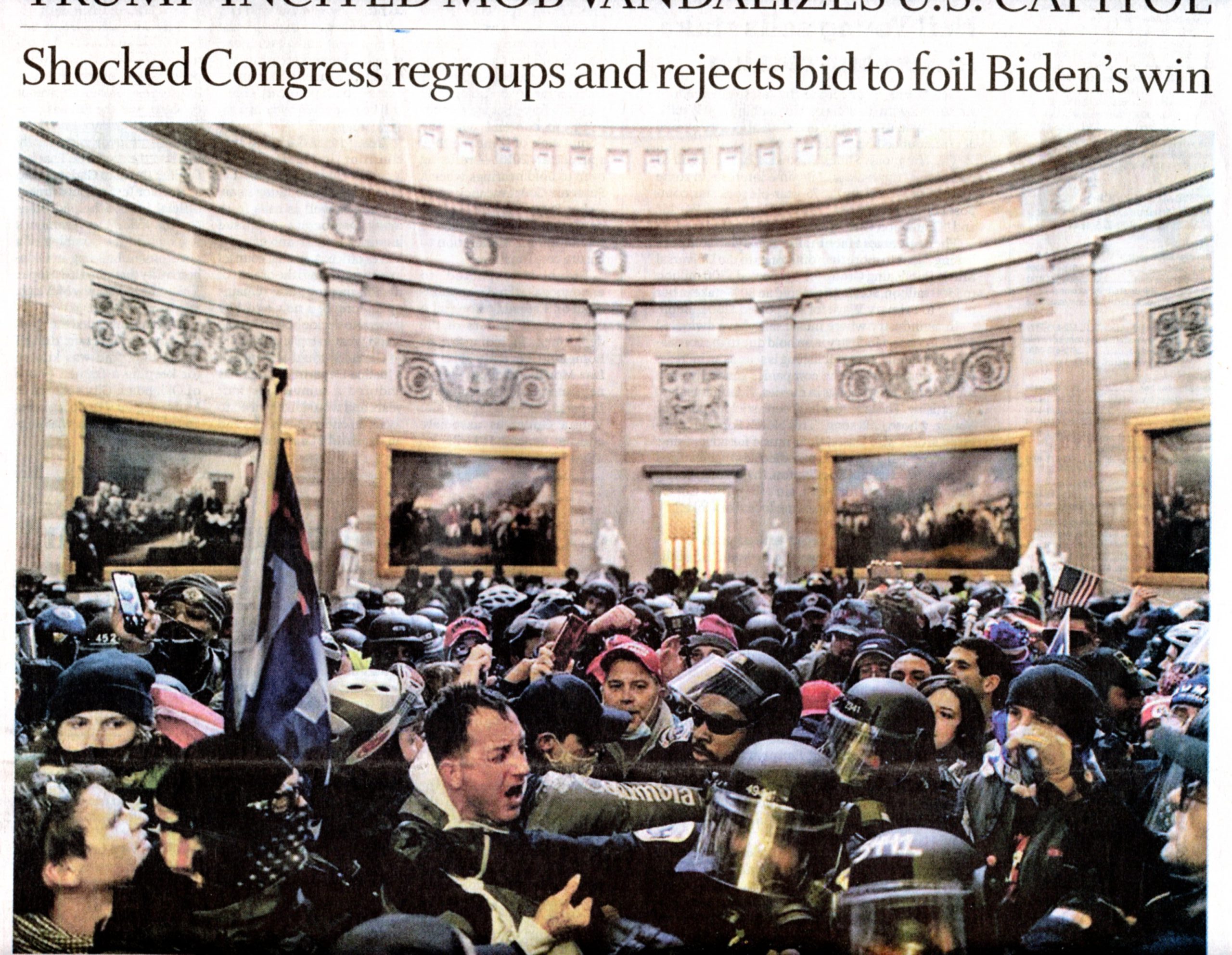 from Marion: Something must be done. Now!

from Norm:  Sedition is overt conduct, such as speech and organization, that tends toward rebellion against the established order. Sedition often includes subversion of a constitution and incitement of discontent toward, or rebellion against, established authority. Sedition may include any commotion, though not aimed at direct and open violence against the laws. Seditious words in writing are seditious libel. A seditionist is one who engages in or promotes the interest of sedition.

“I won by a landslide!”
Serious talk of invoking CM [Constitution Amendment] #25 to try to prevent “I never lose” from doing more damage to America than he already has done.

More from Norm:  The next two weeks will be very tough as well as critical for America as well as for the Dems and Biden/Harris unless Trump is placed under the lock and key of CM#25.

The poor bastard can never lose and admit defeat!
When “beaten” in business and so on, he has always threatened to sue or defame his perceived “enemy” since he thinks that since he cannot lose, his opponent must have cheated or defrauded him in some way or manner,
That is who this ignorant, arrogant, narcissistic, insecure draft-dodging bully is, has always been and will always be!
It is also so disappointing to see so many prominent Republicans supporting Trump in his continued claims of election fraud, including Emmer, Fischbach and Hagedorn.
They all seem to have a much different view as well as understanding of what many of us think that America is, has been and should be.
These prominent Republicans really seem to have no respect or love for America in my view at least!
So disappointing, Dick, and disillusioning as well!
*

from Flo: I kept saying to myself, is this for real?! It was truly horrifying. My greatest fear is the havoc that Trump and his supporters will continue to create. A split Congress is not a good way for Biden to start his tenure as President, for sure!

from Molly:I tried to respond to your post last night, but found I was writing my way into trying to understand or make sense or a future of the mess, instead of writing an actual note.

I did find this posting by Jan Richardson, which I have been sending to my various groups, and thought you might like.  [Dick: This is a Facebook link which probably can only be opened if you have Facebook, which I can’t cut and paste.  It is very appropriate, and brief, from Richardson’s “Circle of Grace: a Book of Blessings for the Seasons“.]
*
Jimmy Kimmel on Jan. 6: here.
*
from Don: The image that says it all. 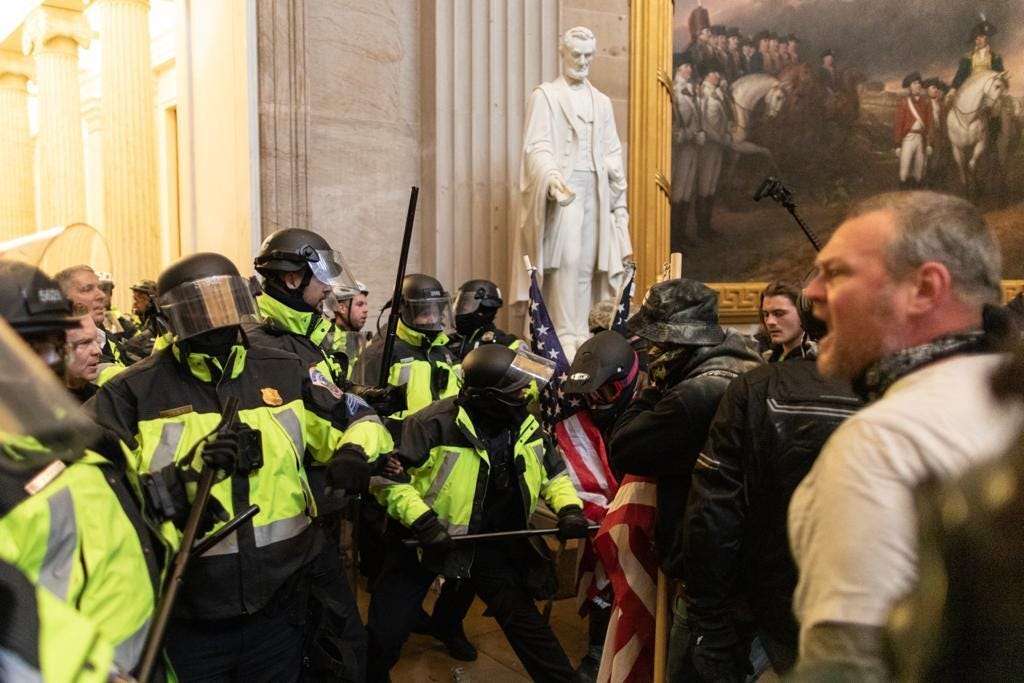 *
Just Above Sunset, overnight Jan. 8, 2021:  “A number of people of good will“.
*
from Dick, early Jan. 8, 2021: There is a great deal to be said about Jan 6 and indeed the entire 78-or-so day time period between Nov. 3, 2020, and Jan 20, 2021.  Our entire nation has a learning opportunity here.  We will all, together, “vote” on our own future, in our own ‘secret ballots’, about our future public behavior.  We will all have a part in defining “Team USA” in the coming years.
*
Dick, postnote Jan 8, 2021 noon: Two days ago at this time I was preparing to watch the confirmation of the election of the President of the United States.  I expected some conflict, not what soon cascaded into chaos.
Now the sorting out.  I predict the conquest of the Capitol by insurgents will end up a Pyrrhic victory for the perpetrators.
I keep thinking of my TV screen shot, which I included first, above.  Here it is again:

I call attention to the woman in the stocking cap on which you can see “TRU..”  Who is she?  Why was she there?  What was she thinking then?  What is she thinking now?  Where is her home?

Every insurgent in that building will be in some photograph.  Anybody with a mobile phone who sent out a text or a photo likely has identified him or herself by their exact location at the time of the call – you don’t need to watch many crime shows to learn that.  Unlike in the old days, those folks trespassing the Capitol cannot melt into the neighborhood.  They are not anonymous.

A long-time friend of mine had a brief e-mail exchange with me on Jan. 5.  He apparently did not like my post, “Armageddon“, and was asking to be removed from my distribution list.  No problem  (he was one of three so requesting, out of a total list of about 500).

Our exchange was completely respectful – we have been friends for many years.  The only point: the entire thread between us occurred before the polls closed in Georgia on Jan. 5, and obviously before Jan. 6.  Likely there are many legally defensible records of such electronic communications on Jan. 6.

But, as I say, all of this will take months if not longer to sort out, and the tragedy of Jan. 6 needs to be pursued.

There will be justice.  Each of us need to be ‘on the court’.

Sunday, January 10, 2021: We remain in post-2020 election history.  Rather than new posts about this, any continuing commentary, until inauguration of President Biden on Jan. 20, 2021, will be included below, at this space.

In the interim, I strongly recommend the 2011 film, The Wave, about a teacher’s experiment with authoritarianism.  Details here (scroll down to Third Thursday Film). Watch on your own, and if you wish, RSVP to join the discussion Thursday evening Jan 21, 7-8 p.m.  Please note, there are other films with the same name and topic, The discussion will be based on the 2011 film, which is in German, with subtitles.  You can find more versions at YouTube.  I believe there is a film rental cost of $3.99.

This morning, the Minneapolis Star Tribune headline was stark and clear, about January 6: “A Nation left violated.  America forced to face threat from within”.   It dominated the front page, along with a photo with the now infamous hangman’s noose framing the Capitol dome in the background.  As a nation, we need to face ourselves.  We are, after all, the individuals who ultimately decide our fate.  Those who desecrated the U.S. Capitol thought they represented all of us. 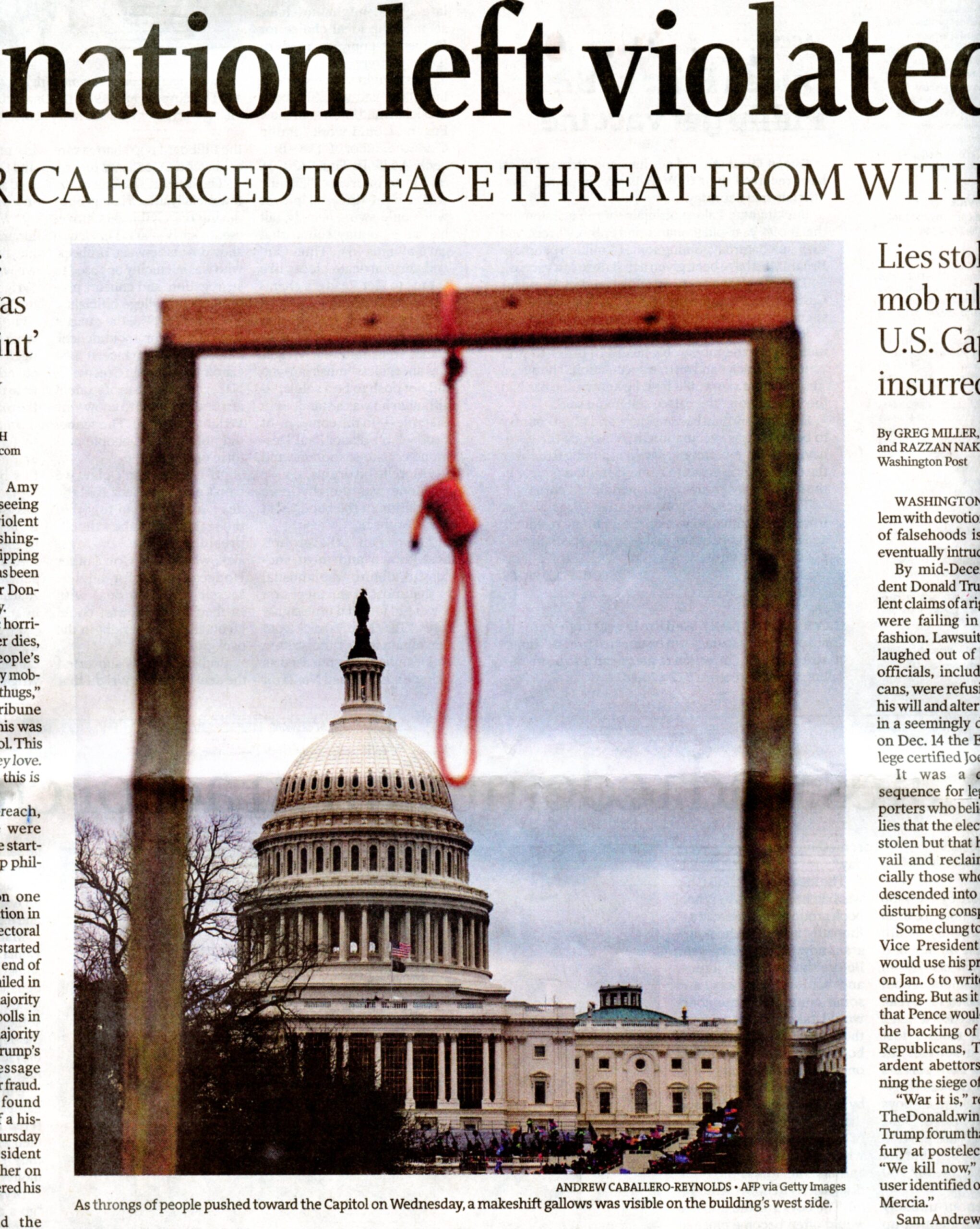 Also, this morning, a friend sent a short film from the U.S. military  from the year 1947.  It is also powerful.  Take a look, here.  You’ll note there is an entire menu of choices.  The one I watched is the second one on the menu, about 2 minutes, presented in the wake of Charlottesville Va in 2017.

Authoritarianism was in fashion in Minnesota and other places in 1930s U.S.  I still have copies of a 32 page insert to the Minneapolis Star Tribune in October which I would be glad to send on request so long as I have copies available.   Post here.

Much of 60 Minutes last night was also devoted to the insurrection.

Like many, I wonder how many people were at the Presidential event and the following attempt at insurrection.  The most reasonable analysis I’ve seen thus far is here (maybe 10,000 maximum).  For perspective, the population of the United States is 330,000,000.  This is not intended to minimize the problem, just to give initial perspective.

The American Abyss by Timothy Snyder, New York Times Magazine Jan. 9, 2021 is very well worth your time.  This is lengthy (15 pages printed).  Here is a pdf of the article (click to enlarge): American Abyss NYTimes Mag

This seems a good time to repost my blogs of August 1 and 2, 2020, on the D’s (Democrats), and the T’s (Republicans).  I post them without any changes to either.

Thursday, Jan. 14, 2021:  Yesterday, President Trump was impeached for the second time.  There have been only four actual impeachments of Presidents in all of U.S. history.  I began a blog post on this last night.  You can pick up, comment, whatever, there.  I will save the editorial for there.