POSTNOTE Oct 25: Today’s Minneapolis paper had two 16 page advertising inserts about a major exhibit on fascism in Minnesota at the Weisman Art Museum at the University of the Minnesota.  This includes an online talk Oct 28 7-8:30 p.m. and an exhibit beginning Oct 25 through January 2021.  Here’s the link with details.

POSTNOTE Oct 30: I watched the on-line talk on Oct 28, and visited the museum on Oct. 29.  The talk was very interesting and will be available on-line probably by Saturday.  Watch this space for the link.  November 18, 7-9 p.m. there will be an on-line panel.  Detail here.  The only exhibit at the Weisman is the newspapers, which are free for the taking.  I took 25, for distribution to anyone who might be interested.   “Fascism MN Weisman” (click to enlarge) is the 4-page folder about the project at Weisman.  Parking at Weisman is easily accessible – it has its own lot.  Its address is 333 E. River Parkway Mpls 55455.

POSTNOTE Oct 31: My “White Nationalist” post, just published, directly relates to this.  It includes 15 comments from individuals on the topic. 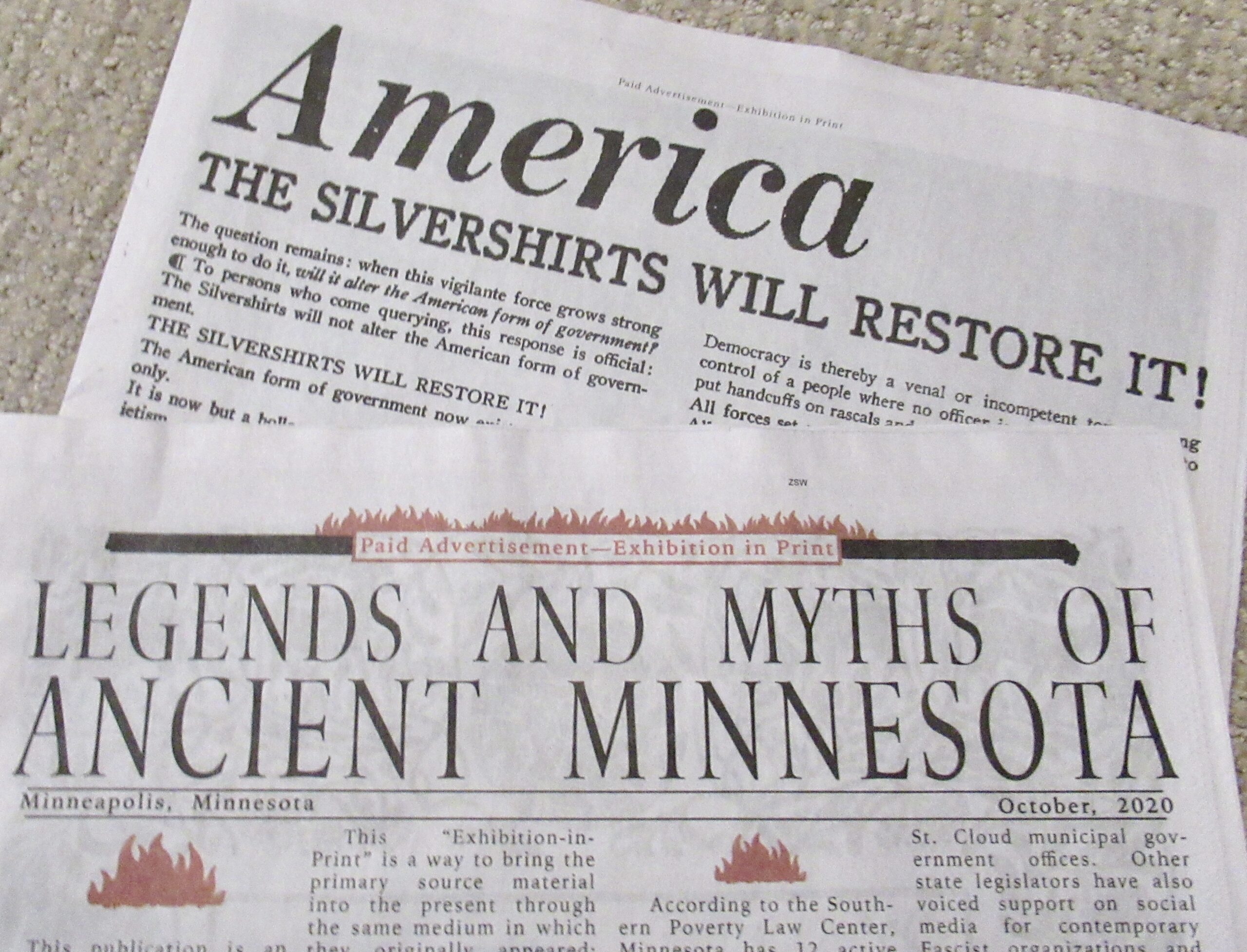 Oct. 23: I listened to the final Biden-Trump debate on Thursday night.  There will be endless commentary elsewhere today.  Compared with the previous two debates (I listened, also, to the first; the second didn’t occur as we all know); last nights was relatively civil.  For more on the final debate: here.

A few days to go to the election itself.

I title this post “Antifa” because it’s one of Trumps favorite words to label people like me.  It’s short for anti-fascist, I guess.  A code word from the dark web.  Sometimes I feel I’m part of an evil cabal: “Democrat”, “liberal”, “left”, “progressive”.  You know….

Yesterday an insight – something I hadn’t thought of before: Trump fancies himself as a Fascist leader: thus, to be antifa is to be against him.  Just an opinion, off the cuff.

Earlier this week on public television we saw Rick Steve’s travel film entitled “Fascism in Europe”.  It is an excellent primer, produced by Steves in 2018, about the Europe of Mussolini, Hitler and Francisco Franco in those “good old days”.  It seems a primer for anyone who wants a United States of Trump.

Trump admires Strong Men; and his cadre, his base, seems largely of similar inclination.

Pretenders to power tend to study how others achieved power, and work the program.

Of course, power is temporary.

Mussolini (dead at 61, firing squad) is described as “charismatic personality and consummate rhetorician” (Britannica).  Italy was the first Fascist country – he was in power 1922-43).

Hitler (dead at 56, suicide in his bunker) was a passionate nationalist and orator and his book made him wealthy.  He needs no further description.  What became his thousand year Nazi Germany Third Reich lasted a dozen years.  He caught a wave at the beginning, and crashed at the end, taking down his entire country.

This trio is the basis of  Steves travelogue.  Personal opinion: All of them, and all others like them, have very large opinions about themselves, and thrive only because their subjects (voters) don’t pay attention to what they have done and are doing their own countries.  The People, writ very large, ultimately lose if they don’t take action.  The longer they wait, the worse and more difficult it gets.  Ask the Germans, the Italians, the Spaniards….

Of the thousands of images I’ve seen of Hitler, et al, the one most telling comes very near Hitler’s death, when he comes up out of the bunker to meet with the children and old men who have volunteered to save the Reich.  Hitler is a truly pathetic figure, and as I mention he was only in his 50s at the time.

There are infinite numbers of other pretenders or aspirers to the status of Supreme Leader.  Trump is only the most recent.

The antidote, always, everywhere, is “we, the people” who refuse to succumb to the lies and deception and promise of glory.

We, the people, are the solution, especially in a democracy, as fragile as ours can be.

Sunday night watch 60 Minutes and Lesley Stahl’s interview of Donald Trump (the interview he walked out on, and then released in violation of previous agreement with CBS.)

from Jay: I am glad you are well and keeping at it. I am sorry but I have felt fascism is getting stronger in US and some other countries for several years now. Specially with Trump in power. And it is not by only “white” people. India and Philippines are moving that direction. I can only hope the violence will be minimal.

response from Dick:  My main issue in this election was the “tone” of the country which is set by the President.  Hopefully, Biden will be elected, and will set about the very, very difficult task of changing the tone of all of us.  It will be very, very hard.  (The same applies to the other countries you mention.  People are sloppy at electing leaders, especially in democracies.  There are consequences.  Thanks for feeding in.

from Glenn:  “The rise of Fascism in 1930’s Minnesota” is being repeated by “The rise of Antifa in 2020’s Minnesota”.  Thanks to the Democrat party, this time it has infested most of the country!  Today, of course, the term is Orwellian.  Like in most liberal left propaganda, word meanings are changed at will.  When you have an obviously fascist, anarchist organization, call it Antifa (for anti-fascist).  That way the “deplorable uneducated masses”, which include everyone but the left, won’t catch on.

If, as you sarcastically said, you sometimes feel like Democrats, leftists, liberals and progressives may be part of an evil cabal, there may still be hope.  Maybe you should take those feelings more seriously.  For people who support a hateful, socialist, pro-abortion, baby-killing party, the term “evil cabal” seems appropriate.
Though you seem to be blind to anarchy, fascism and hate, you will probably also hate this message.  If so, please do us both a favor and delete us from your propaganda list.  We already hear more than enough of these hateful lies from the Democrat party propaganda purveyors like Hollywood, CNN, MSNBC, ABC, CBS, NBC, NPR etc..
from Dick:  It’s a free country…at least so far.  Glenn’s contingent, and there are plenty of them – though a minority, I feel – are the people Trump talks to at his rallies.  Fear, loathing and grievance are their emphasis.  Theirs is a country of winners and losers.  Trumps only objective is his personal “win”; his supporters don’t see that reality.  My main issue is the very negative “tone” set by Trump.  It will be hard work to get back some positive equilibrium.  It will require lots of effort by the more moderate types.
from Gail: Thanks, Dick.  It’s important for us to know this history, in the hope that it won’t be repeated!
from Jeff: check out 3 part series  Long Shadow  about the long consequences of WW1….one segment reviews fascism, communism and Wilsonian liberal democracy.   It’s on Amazon Prime.
from Dan: Thanks for the tip on this exhibit, Dick. I’ve just ordered the booklet from the Weisman. Maybe I’ll see you there tomorrow.
from Joyce: An excellent commentary from Heather Richardson on things like fascism, communism, socialism.
https://thoughtstowardsabetterworld.org/wp-content/uploads/2022/04/thoughts-300x138-1.jpg 0 0 dickbernard https://thoughtstowardsabetterworld.org/wp-content/uploads/2022/04/thoughts-300x138-1.jpg dickbernard2020-10-23 09:55:562022-11-02 15:33:09“Antifa”
2 replies