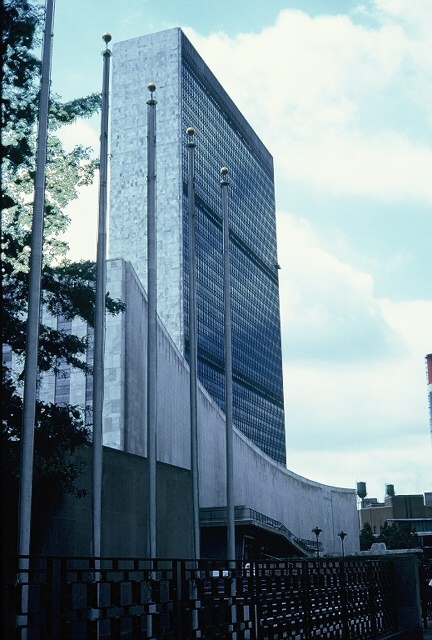 Today is the 75th birthday of the United Nations.  I am a strong supporter of the United Nations.  I’m in good company.  Not everyone is a fan.  Whatever its problems, the UN has been a major factor in keeping nations and peoples from obliterating each other as we did in ever more deadly wars especially WWI and II.  Ways are found to moderate passions.  The potential problems remain daunting, but not insurmountable.

Here’s the UN’s own rendition of its history.

Here’s my friend, MN Gov. Elmer L. Andersen’s, tribute to the United Nations at a speech he delivered May 1, 1968: Elmer Andersen I Trust..001 (three pages, click to enlarge).  He was speaking, that day, on the occasion of raising the UN flag beside the U.S. flag at the site of the Hennepin County Government Center.  The flag, properly subordinate to the U.S. flag, flew there for 44 years before being removed in March 2012.  You can read that story here.

It is not hard to imagine a United Nations.  We are, after all, a United States including 50 political entities called ‘States’, and assorted other territories such as the District of Columbia and Puerto Rico.

The UN began with 50 countries as signatories, and now includes 193 member nations of great diversity and even greater complexity.  The diversity is shown in tables in Dr. Joseph Schwartzberg book, Transforming the United Nations System, Designs for a Workable World, which can be ordered here.  The tables can be seen here, updated to 2017: Wealth of UN Countries.

I don’t forget other efforts, like the proposal for a League of Nations, and the Kellogg-Briand Pact, both important.

Antonio Guterres of Portugal is the current Secretary General of the UN.

Wednesday I was one of those on a Zoom call where Mr. Guterres spokesperson, Stephane Dujarric, gave us an update on the UN at 75.  You can listen/see his presentation online, here.

Personal Comments:  We live in a country where “me” seems to have become a dominant philosophy.  Our President is at the pinnacle of this philosophy: all that matters is what matters to me.  This crosses lines: our cause is most important, others must be subordinate to mine.  Our day is ruined if our team loses:  “Fire the coach.”  “I’ll never watch them again.”  Combat is too-much our national ethic.

The concept of “We” is a struggle for those of us who have; an inaccessible dream for most who have not.

We ‘haves’ can afford – we can ill afford – such a luxury.

Every single one of us, everywhere, is on this planet together.  As we know so well, climate, Covid-19, our very economy, and on and on, do not honor national borders.

We don’t wall others out; we tend to wall ourselves in, like the old medieval city states.

Our oceans no longer protect us, and we’re destroying them, too.

As most all of us know, living together even in a family unit is not always peachy keen.  Neither is living alone.

The United Nations, in a very real sense, was founded on an ideal perhaps quite similar to the American ideal of the founders in 1776.  It is no accident that the UN headquarters in in New York City, rather than Paris (though the first UN meetings were actually in Paris.)

I hear that Hubert Humphrey was a cheerleader for having the UN headquarters in Minnesota.

These days I maintain a monument to a couple of personal heroes, both military veterans, who dedicated much of their adult lives to the cause of global cooperation.  AMillionCopies is the space recognizing Lynn Elling and Joe Schwartzberg.  Take a moment to take a look.

We can work together.

from Harry:  Thanks for this reminder, Dick. At 15, in 1945, I had so much hope for the UN.  Then, they gave a few nations veto power and made the UN practically impotent! I prayed for the UN at Mass this morning that it come to live up to its potential!

response from Dick: I understand, Harry.  It was a political reality, then, and in too many ways still is, that the winners took charge, and the veto gives them power.  In many ways, though, I now see examples of the other countries figuring out ways to build coalitions, etc., which don’t depend on the security council for approval.  We keep on, keeping on.

from a long-time friend:  I fully support Harry’s comments about the nations that have veto power.  It has made the United Nations impotent.  And the biggest violator of morality has been the US.  It is shameful how the US has been complicit to what has been done to the Palestinians.  It’s 75th birthday is nothing to celebrate.  I would advocate that the organization be disbanded were it not for segments of it that try to do the right thing, like the shelter in place facilities that they have established in Gaza.  But unfortunately the US doesn’t support those organizations.

Recall the 2014 invasion of Gaza.  On seven different occasions the UN had provided notice to Israel as to the Schools, Churches and Mosques that were used as “shelter” facilities for the Gaza civilians.  The unfortunate result was that Israel used that information to focus its attack on those specific facilities killing 2000 Palestinians, most of which were women and children, including 400 Christians.  But does the US care?  Not at all.  All of this is a part of the systematic extermination of Palestinians, which all started in the 2006-2007 timeframe when Israel withdrew its settlements form Gaza and besieged its population.  And what did the most powerful member of the UN do, absolutely nothing.  The actions of the US have been disgraceful.

Then there was that incident a few years back when President Bush gave Israel the “green light” to carpet-bomb Gaza and Lebanon, which was a war crime that Israel will never pay for because the US has veto power to protect Israel from war crime prosecution.  There is hope that the International Criminal Court will one day develop a broadening strength to eventually punish Israel for their crimes.

Well enough on that infuriating subject.  Hope you and your family are doing fine.

from Flo: Thanks for the reminder. Peace is so illusive these days. I’ll go to our Black Lives Matter stand again this morning, though my signs are for Peace. Those who don’t like what we stand for are very verbal and often hateful. Go figure …

from Mark: a film clip of Dwight Eisenhower talking about war.  Well worth your time.

from Norm:  Ah yes, Dumbarton Oaks and all!  The UN still has value in spite of Donnie and his ignorance, arrogance, insecure, and narcissistic behavior towards taht body.  Unfortunately, the behaviors of some of the peace keeping forces looking for a little extra piece or two on the side, i.e. international relations, if you will, with those that supposedly they were there to protect has given the UN opponents some unneeded ammunition for their cause.