POSTNOTE: Proof of Casual Indifference (Aug 19) directly relates to this post.  August, 2020, has been particularly about politics.  Check archive for more.

As printed in my August 1 blog, “[in] June 13, 2020, I wrote a letter to a good friend my age, who I’ve known for many years, about the political times in which we’d lived, and in which we now live in the present day.  “My one statement for this letter is this: in the last 62 years only in the last three have I felt totally excluded – and in 35 of these years a Republican was President.“

This defines my difficulty in writing this post about politics in 2020.  I think I can safely predict that the coming months will be the dirtiest campaign in American history, with very heavy involvement by foreign countries, and abuse of social media and complete absence of honesty by the incumbent president.  After the Democratic Party completes the process of nominating its candidate for President and Vice-President, I will write about that in a subsequent post.  Most August posts and perhaps thereafter will be on national politics.  Check back.

An eye-opening Netflix series entitled “The Family“, gives a look inside the people and organization behind the national Prayer Breakfast.  Their focus is temporal power.

The “T” in the title of this post is not a typo.  Today, there is no longer a true “Republican” Party in the United States. The name has simply been stolen.  What used to be called moderate or progressive Republicans have been all but banished from their own party.  A large body of Republican leaders no longer in public office are campaigning against the likely Republican nominee, and declare their vote for the Democratic challenger.

The current titular leader of this new party, a master of Twitter, and pitchman, relies on the perhaps 25% of the electorate who believe in him.  He can count on perhaps 40% of the electorate, and to win has to manipulate the oppositions ability to vote in a free election.  The United States is no longer a united people.  We see and hear the evidence every day.  I’ve used the below diagram before.  Here it is modified to show the 25%.  25% is a large number, but not enough.  To win, varied strategies are needed, like suppressing the vote, divide and conquer….  Everything will be thrown at the wall to “win”. 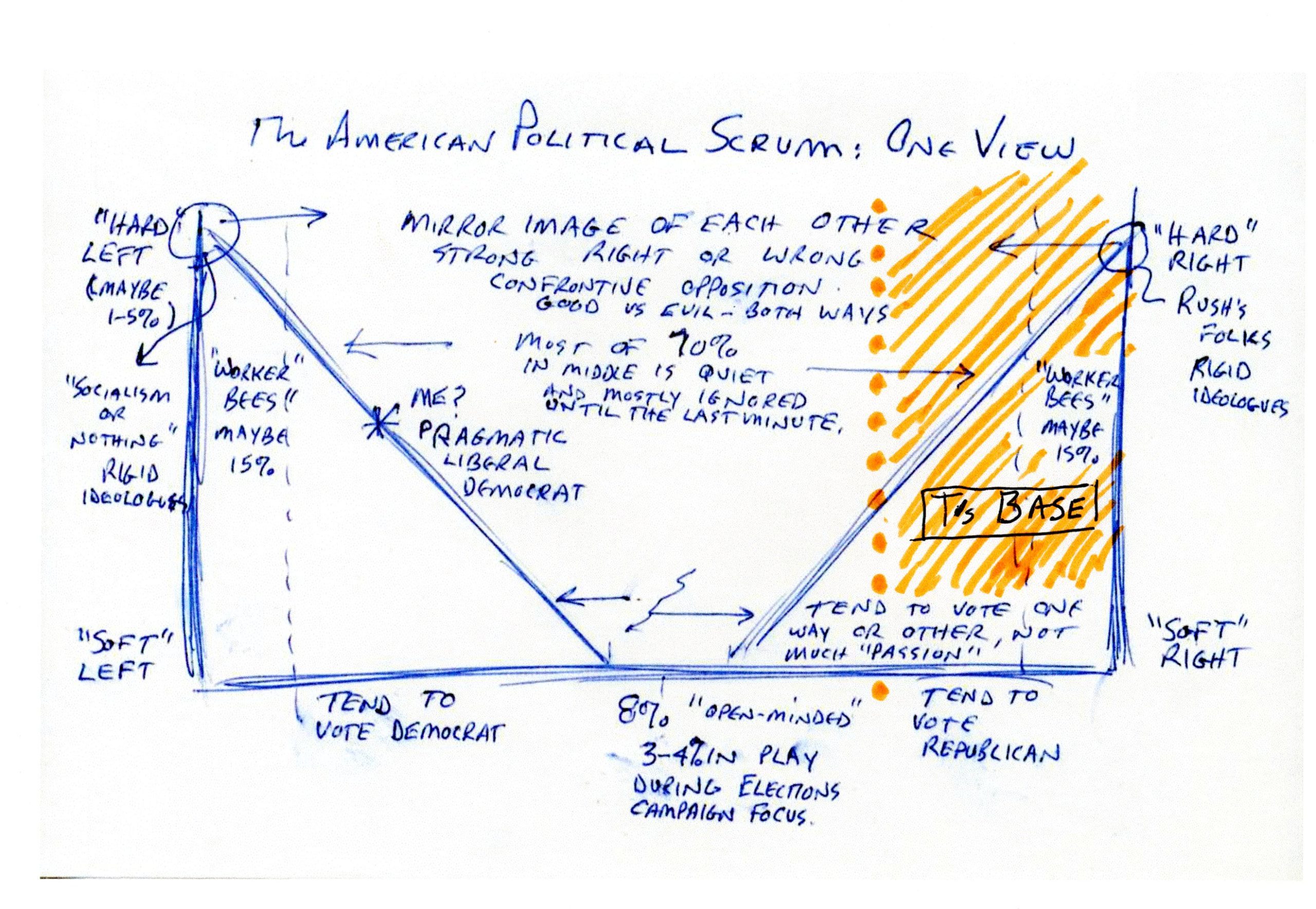 The colored area to the right approximates the 25% or so of the electorate who is the reliable ‘base’ for the current President.

The platform of the “T” base?  The Presidents verbal pronouncements and his barrage of tweets….

For Democrats, I chose the ideological word “We”.  For the T’s, it is the word “Me”.  Democrats generally believe in Freedom for all; the T’s more likely to believe in their own Freedom, including the right to control the Freedom of others.  I regularly observe a very large distinction: immigration, “choice”, on and on.

Politics 50 or so years ago and before was very vigorous but basically respectful competition.  We were one country; one people.  We now have a Twitter President , and the so-called “Tea-Party” escalated the anti-government moves supported by people like Newt Gingrich, Lee Atwater, Karl Rove, Rush Limbaugh, Grover Norquist, Roger Stone, David Coe, Alex Jones and other ‘take no prisoners’ all-in-for-power pitchmen.  “T” has basically been a white men’s movement, dominated by wealth.  Look at the respective party representatives of both major parties in U.S. and state government.  The difference is obvious.

Exactly when the current dysfunction began can be debated.  Much goes back to the very beginning of our country.

I define things in terms of my own lifetime of 80 years.  In this more recent era that division has been raging since at least the 1970s.  Traditional and often progressive Republicans have essentially been banished from influence in the Republican party my parents and grandparents knew.  (It probably has always raged, in different forms, but never so organized and destructive as it is now.  There is no respect.  The only emphasis is winning, at any cost.  And the cost of winning is high if one side ‘wins’ and the other ‘loses’.)

Public war was declared by the then-Republicans when Barack Obama was elected in 2008.  Sen. Mitch McConnell publicly stated his intention, as Senate Majority Leader, to make Obama fail.  Throughout the time of the Affordable Care Act (“Obamacare”) the Republicans did, and have done, everything possible to repeal the act, or to damage it in any possible way.  Even now, the constitutionality of this act is at the Supreme Court, pursued by the current President through the Justice Department.

While the rage is against “government”, the same people seek to control the same government they loathe, and covet attaining exclusive power.

As noted above, their base is perhaps 25% of the total electorate; on a good day they can count on about 40% support for their man.  The strategy, thus, has to be to reduce the risk afforded by democracy: the right and opportunity to vote. 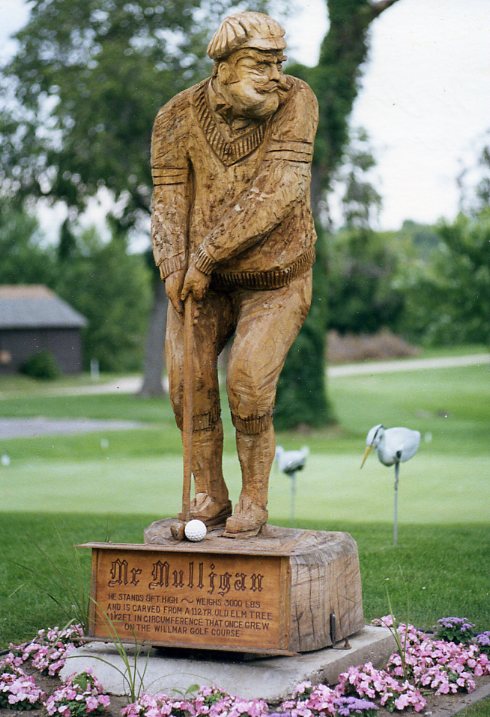 Mr. Mulligan seen at a Minnesota Golf Course in 1992.   This reminds me of the current occupant of the White House.  Photo by Dick Bernard [POSTNOTE: I posted this photo more than a week before the Bedminster “presser” where the President announced his Executive directives to an audience comprised of the wealthy members of the Golf Club.)

People who know me are accustomed to my political narrative: I’ve been aligned with the Democrats since the 1970s, but a number of my political mentors and heroes turned out to be what is now termed progressive Republicans, people like Elmer L. Andersen and David Durenberger in Minnesota, and many more.

In fact, my current Democratic Party governs basically like the old-time Progressive Republicans, much to the chagrin of those farther to the left.  The Democrats are the people’s party.

The dilemma, now, is how to get out of this mess, which has been exacerbated by today’s Republican leadership which enables and indeed has facilitated the disaster within which we are all now living.

I wonder if those almost slavishly dedicated to Republican incumbents reelection have any idea what it means to derive their power from less than half of the national population.

We have been, since the Civil War, at least nominally a nation of all, not two nations at perpetual war with each other.

We desperately need constructive change.  The 2020 election is a major opportunity.

D’s Edge of the abyss….
Scroll to top