Today it is 100 days to the 2020 U.S. elections.  The Democratic Convention is Aug 17-20; the Republican Aug 24-27.  Shortly thereafter the first absentee ballots can be mailed (each state has different rules – check them for details.). The time to impact/inform is very short; and the issues compelling.  Three previous  post: Schools (July 22), Racism (July 7) and John Lewis (July 19  ).  More will follow, especially between now and September 1. 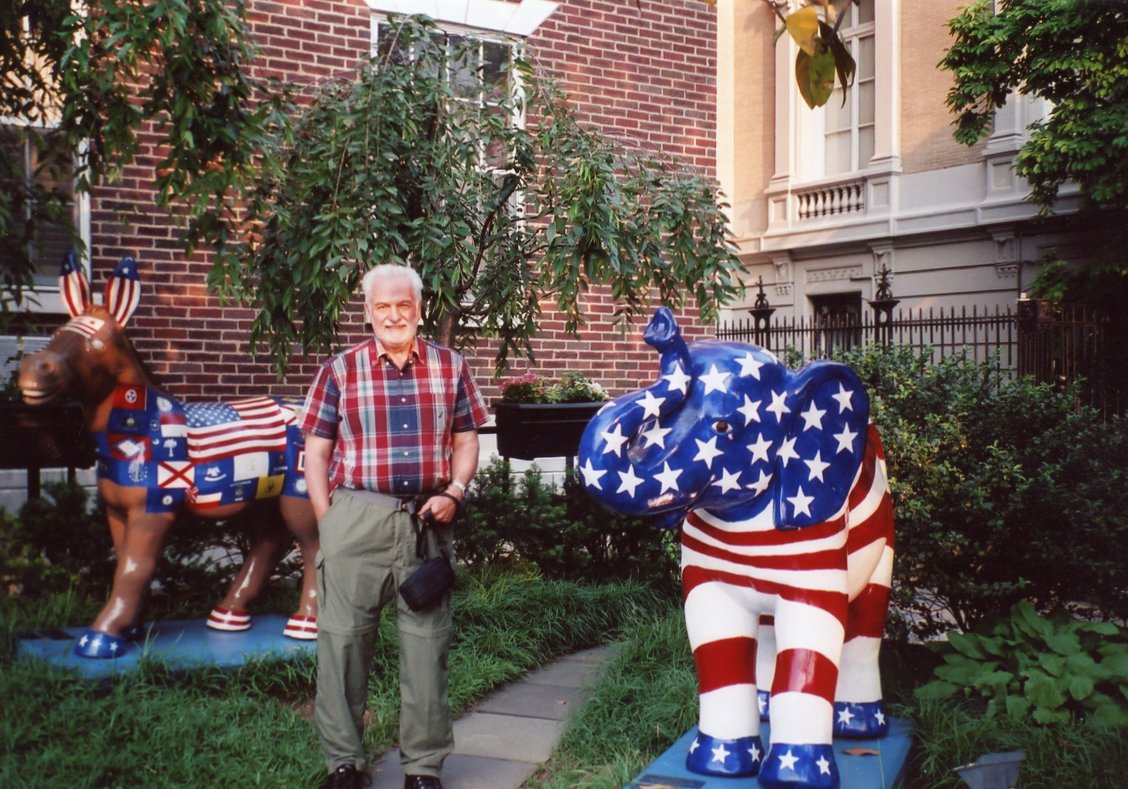 Washington D.C. June, 2006, just a few blocks north of the White House.  I wonder if the whimsical symbols of Democrats and Republicans are still there….

Each of us will, on November 3, be voting for local, state and national elected officials.  My wish is that everyone who can vote, will vote, well informed, for all offices on the ballot.  Who are we?  Pew Research is a well-respected reporter of data on elections.  There are other impartial sources as well.  Voter turnout, including for President, is always disappointing – in the last election, fewer that half of eligible Americans voted for President of the United States.  We seem very casual about our primary role in politics.

The most visible offices for most of us are the President, Congress and Senate of the United States.  For your information, I broke down the offices by which party held them.  You can see the data (only two pages) here: U.S. Government001 (click to enlarge).

A friend has asked me to comment on Joe Biden.  I said I will do so when Mr. Biden is actually nominated as the Democratic Party candidate at it’s Convention in mid-month.  (My July 11 post has the links to the Convemtions.)  At the same post is my sketch of the American body-politic as I see it.  We are the same people, generally, as we were when I was born 80 years ago.  In my adult life, I have watched us being deliberately divided into warring tribes, intensifying in the past five years.  Ultimately, we have to be the solution, not the politicians we always like to blame, but truly take their cues for survival from their constituents.

POSTNOTE: The same day I received my mail-in ballot for 2020 (July 16), the Minneapolis Star Tribune had a page two headline “Cost cutting at USPS could delay mail service“ (Associated Press).  I knew of the article beforehand, and the longer article suggests political foot-dragging leading to voter suppression.  Those with an interest probably already know the story.  I’ll still vote absentee for both primary and general.  My advice, vote as soon as you know who your candidates are.

former MN Secretary of State recommends “that everyone consider voting as soon as the voting season opens on September 18th. Everyone in the state is eligible to take advantage of this opportunity and should because what happens in November remains unclear given the arc of the virus is unpredictable.”

from Steve, elected legislator:  Just sitting down for a late a.m. second cup of coffee and had the pleasure of reading your note and post. You mentioned a couple of things that concern me, as well. The percentage of voters in primary elections is almost always very low. Sometimes below 10%, though Minnesota does slightly better but nothing to brag about. Major changes in elected officials have occured when a challenger has done some aggressive organizing.

Another issue you mentioned is the divisive nature of so much political rhetoric during the last dozen years–attitudes and prejudice implied through the Obama years and now more evident. Finding a way to bridge or repair those divisions is among the priorities of our next president, and those of us who want to be optimistic about a future.
from Mary Ellen: I appreciate your reluctance to comment on the ‘presumptive’ nominee. Who knows what the convention will bring? I’d like a younger candidate, even one of those very strong women.
I have been at my cabin since mid-May and will stay through September. This community has had two cases (2) of COVID 19 and zero deaths. We wear masks in town. Some people didn’t wear masks. They are the Trumpers. Now with the mandate, most of them wear a mask. Are they free to risk other’s lives?
We grant freedom of religion (even to snake handlers) and political freedom (even to KKK and their ilk) to all. Are there no limits?? Will no one start that conversation?
https://thoughtstowardsabetterworld.org/wp-content/uploads/2022/04/thoughts-300x138-1.jpg 0 0 dickbernard https://thoughtstowardsabetterworld.org/wp-content/uploads/2022/04/thoughts-300x138-1.jpg dickbernard2020-07-26 10:27:252020-08-04 18:16:05100 Days
2 replies

Playing a Very Dangerous Game A Peace of My Mind: Cry Out
Scroll to top