[IMPORTANT ADDED NOTE as of Sep. 16,2020 from Basilica of St. Mary, original sponsor to the Racism series described below:

The University of St. Thomas has placed the Becoming Human series on a new platform on their website.

While there is a fee for this series, The Basilica of Saint Mary is offering this series free of charge: The Discount Code is BecomingHuman100

We invite you to utilize this series and share the Discount Code, as needed.

On the site page, go to “Add Course to Cart,” enter into the “Check Out” page and add the Discount Code:

BecomingHuman100. This will remove the fee and you will have access to the series free of charge.]

I started to come to grips with this years ago.  The first ‘evidence’ is this little piece I did in January, 1995, for Martin Luther King day at my church: Race, a personal view (click to enlarge).

The desire to understand more about my own self led to the most recent recommendation, at these pages, several times, to listen to the six talks on “Becoming Human“, presented by six professors at St. Thomas University in February and March, 2020, literally at the beginning of the pandemic.  I saw the first three lectures in person, and watched the last three on line.  If you’ve now decided to watch, here is the link to all of the talks (scroll down to “Featured Resources”).

Where does this Racism business come from?

If we’re honest with ourselves, each of us can come up with plenty of our own examples: how we came to be who we are.

One fairly recent example for me came five years ago out at the North Dakota farm of my ancestral family, which I had to close when our last farm survivor, my uncle Vincent, died.

It was Nov. 14, 2015, and I was at the farm, alone, going about the lonely process of burning left over “junk”, from simple trash, to things no one had expressed any interest in.

Among the possessions in the metal shed was a pile of unclaimed books, none in good condition, certainly no ‘collectors’ editions.  I don’t like to burn books, but the burning barrel was the only feasible destination for these volumes, mostly moldy.

Still, I looked at each before tossing.  One in particular caught my eye: 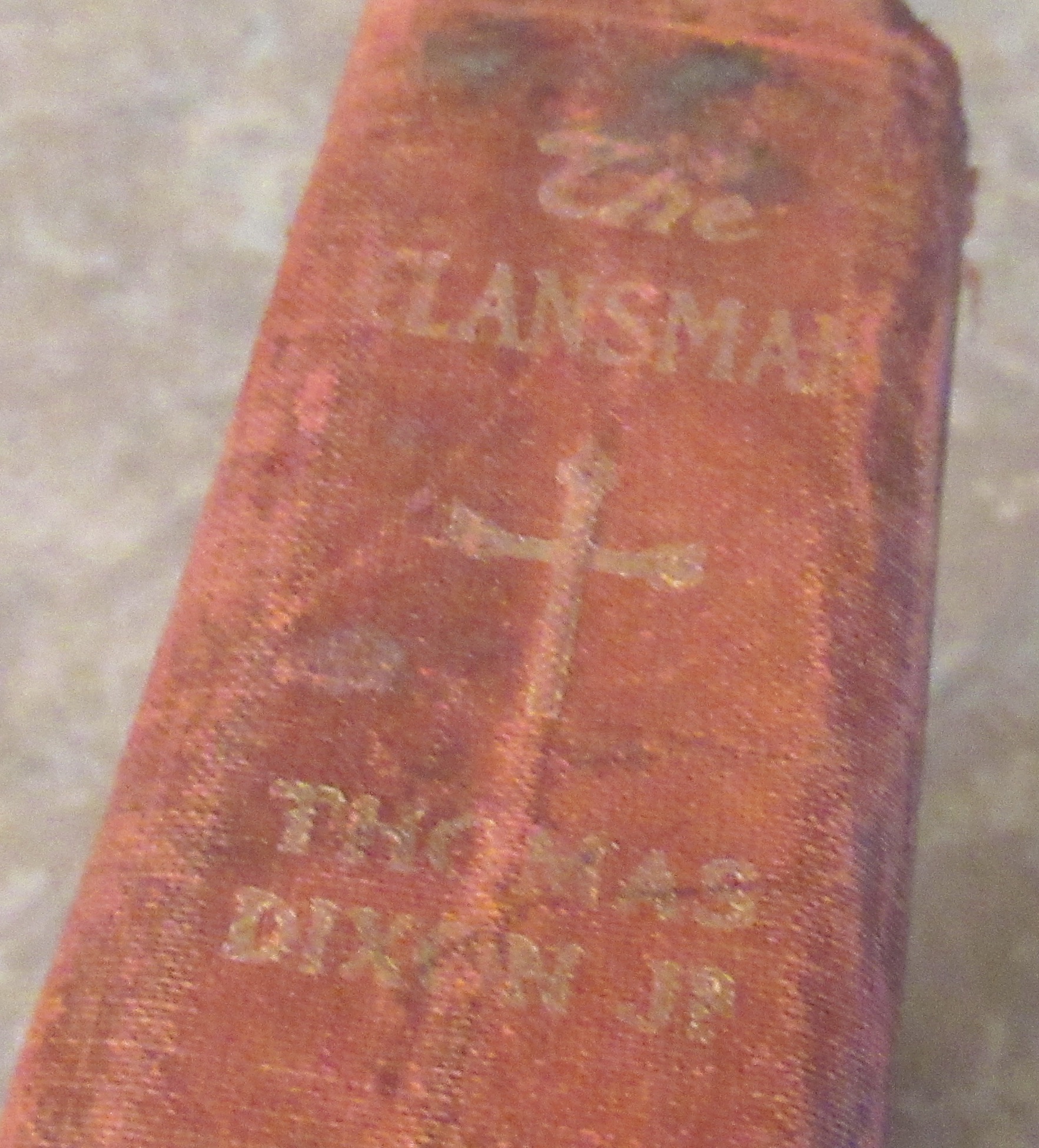 I had only a vague notion about this book, but the title, “The Clansman” caught my eye.  It turned out to be a 1915 reprint of the original 1905 novel about the Ku Klux Klan, apparently republished on the occasion of the film “The Birth of a Nation” in 1915.  In substantial part, the movie was based on the book.

How was it that I found this book on a small farm in North Dakota in 2015?  Who brought it there?  Why was it kept for near 100 years?  Who read it?  Who saw it earlier and decided to keep it?  The book was stamped as once the property of Moorhead [MN] Public Library.  Other than the book, as best evidence, all the other questions are unanswerable.   Everyone who handled the book before me is long gone.  Here are two photos from the book. 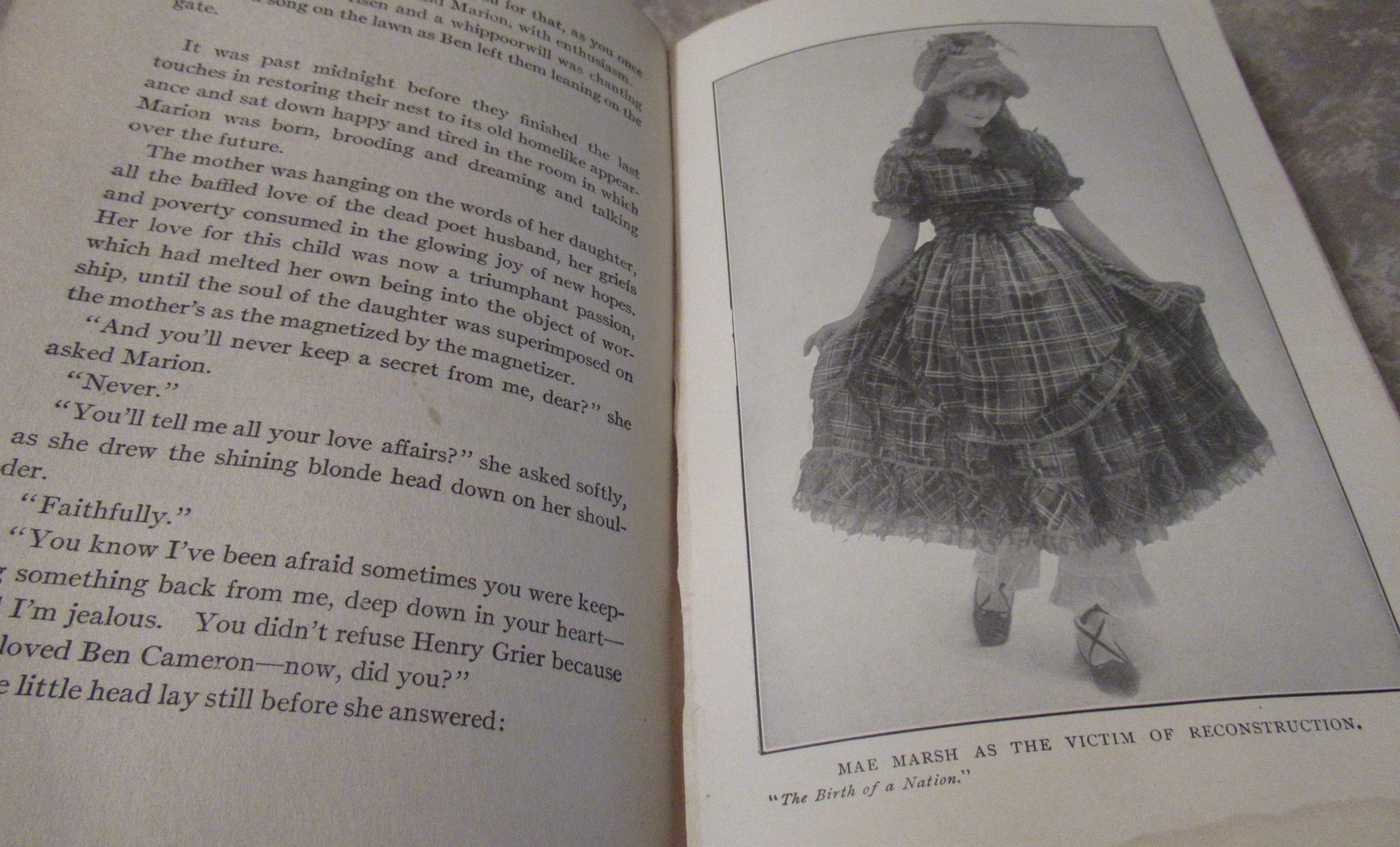 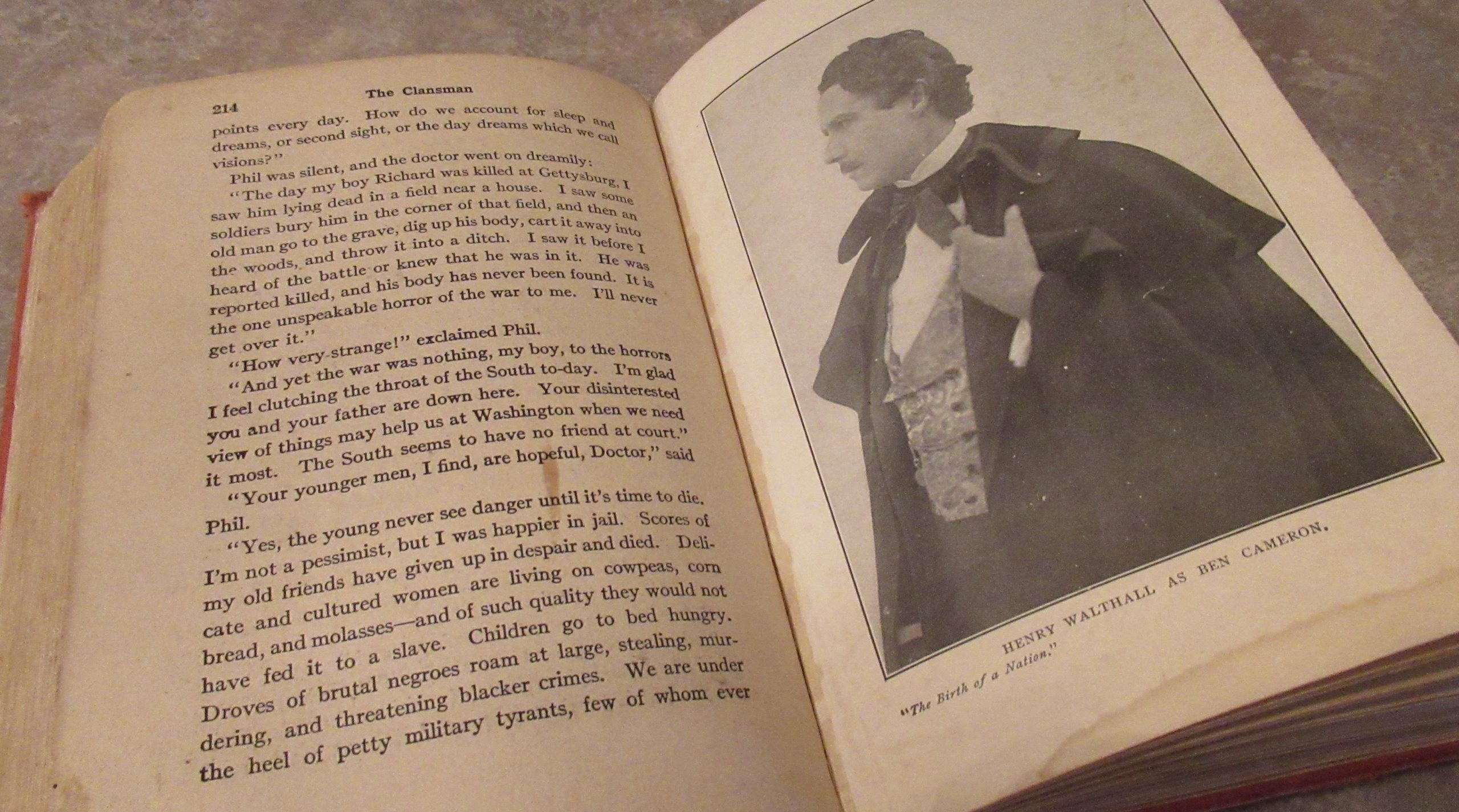 I decided to get this book restored, and I read it from cover to cover.  I sought to understand what it had to say; why it was written.

Personally, the biggest takeaway from this volume was a sense that white overseers, particularly in the defeated slave states, were terrified of the freed slaves.  They,  now badly outnumbered, probably felt they would now be treated as they had earlier treated their slaves.

Reconstruction thus became just a continuation of the Civil War.  The statues, this book, other symbols, are the remaining evidence of an attempt to defeat the defeat of the south in the Civil War.  As evidenced by this book on my relatives North Dakota farm, the attitudes migrated out of the south to other places, and still remain alive today.

I have encouraged people to read this volume and mine it as an opportunity to learn, not to pine about going back to the old days of slavery; rather to get better grounded in how serious and long-standing the problem of our history – our racism – is; to think and act about solutions to our 400 year dis-ease..

The book is nothing to fear, though few have taken the bait.

I think the book is worth your time.