Years ago I scrawled out a personal assessment of myself and the American Political “Scrum” – the mass of people who make up the ‘body politic” of this country.  I could ‘gussy” this up, I suppose.  But I like it as it is. 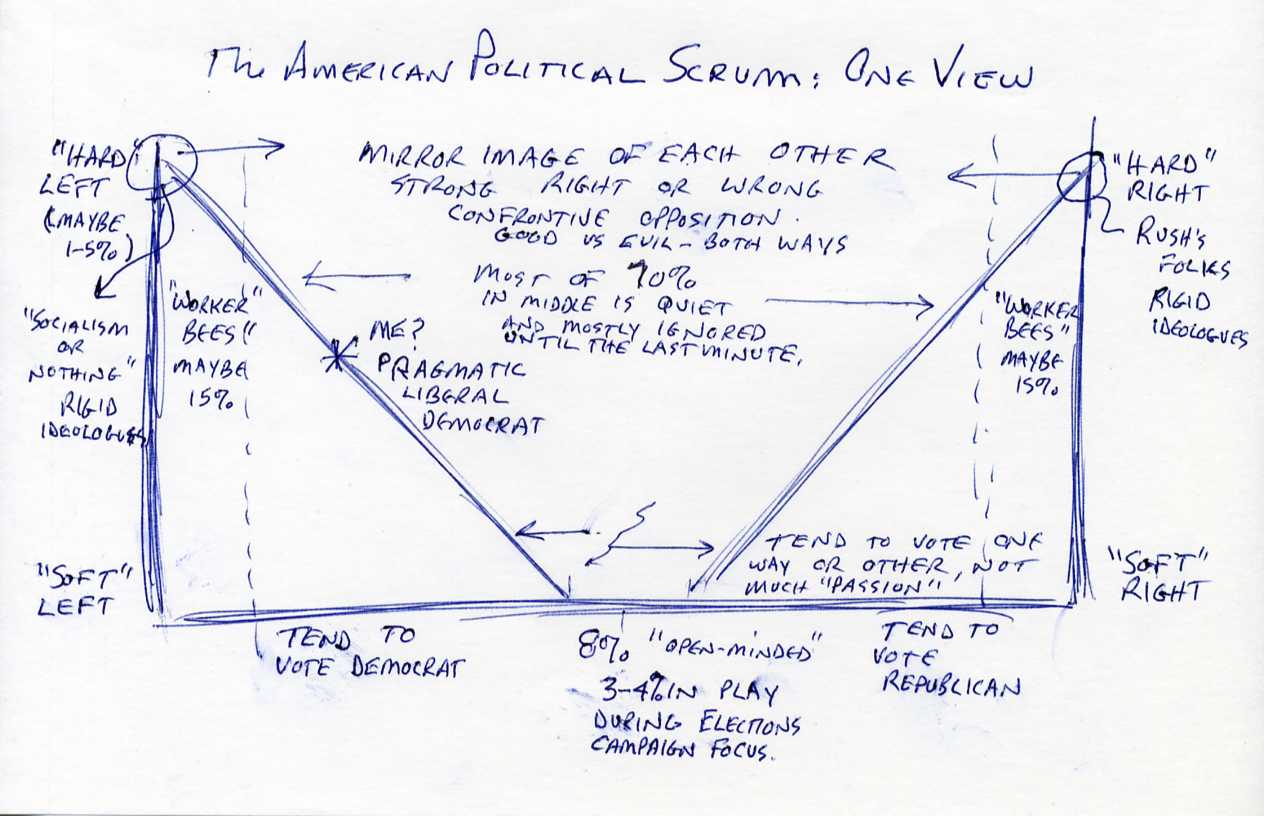 You can see “ME?” as I defined myself at the time.  Today, I’d probably move my ‘spot’ a bit more to the left, but not a lot.  Our country seems far more polarized now – I have my opinion, you have yours.

I’ll leave it at that for now.  In coming days and weeks I’ll more define the R and the D from my own perspective, and Biden, and local and state and other races and their importance.

In the end “we, the people” make the difference, and in the end, we all get what the majority of us thought we deserved.

“A July 3 letter writer (“Out-of-date lists”) tries to cast doubt on future election results by suggesting since a million dead people erroneously received federal stimulus checks, “mailing out ballots to everyone” could lead to similar results. Stimulus checks were sent out (hastily) based mostly on IRS tax rolls. Recipients did not request them.

The writer seems to imply the state is similarly mailing actual ballots willynilly to those on an outdated list. On the contrary, what we received in the mail are applications for ballots, which we can fill out and return if we choose to. The ability to vote by mail on request (“absentee” voting) has been Minnesota law for some time. The only difference this year is that, because of the pandemic, the state is encouraging this method by sending applications to registered voters.  There are layers of safeguards for voting by mail. Is it possible that someone could receive an application for a recently deceased relative, fill it out using their personal information, forge their signature, mail it in and receive a ballot? Only by risking the very real possibility of going to prison.

I suggest that the writer call the Secretary of State’s Office if there are further things he does not understand. They seem quite willing to answer questions.”  Carol Turnbull

Dick: Absolute certainty: there will be endless scams and schemes to mislead and deceive.  It has already begun and it will only intensify.  Be certain you cast a ballot, and that your ballot will be a well informed one for each and every office for which you can vote.

(I requested absentee for both primary and general this year – possibly second time I can recall doing that.  The process of me (Minnesota) was very easy and quick.)

from Rebecca: I like your cartoon of the political scrum.

from a long-time friend ‘out west’: Hi Dick, I am a center-right progressive in the ilk of Teddy Roosevelt and Ike, and as such, I have always been a registered Republican.  Always have been and always will be.  When the southern racists who parked in the Democratic party because of their hatred of Abraham Lincoln moved over to the GOP, I then started voting mostly for Democrats.  But I still find it useful to remain a registered Republican because of the stuff they send me which allows me to understand what they are trying to accomplish, which I can compare with the Democratic position on the same subjects.

from a long-time friend in England:  I am not saying don’t bother voting – democracy only works when people vote after all – but somehow & barring last hour revelations or worse it seems to me the election has been lost for president Trump already. I like your sketch & it feels like you are not the only one who has shifted leftwards even if not by much. It doesn’t take much to reverse the last election.

It also seems to me that president Trump has outlived his usefulness what with tax cuts, decisions regarding the Middle East & stuffing the Supreme Court. To the movers and shakers he has become an embarrassment & a liability. He has been divisive from before day one dividing the world, the US, the administration & lately even his “own party” – assuming he has a party other than himself. Who could have imagined Republicans forming lobbies & action committees to make sure he is not re-elected!? Finally his niece is coming out with a book which indicates the family is also divided.

Here’s what the Financial Times had on one front page this weekend & you would expect conservatives to be attacking her viciously instead while some do have issues with what she wrote (earlier), still on the whole they seem to be of two minds & agree with much of what she professes.  Also, here.

Enjoy the rest of your weekend,

from Steve: I don’t know how I missed sending a note to you after your Political Scum note. I was just going through emails trying to make sure that I hadn’t missed a constituent request or comment. I loved your drawing. I remember making a drawing on a poli sci exam in college., Not as sophisticated or fun as yours, I had fascists and communists meeting as totalitarians at a point on a circle, each arriving by separate paths around the circumference. What kind of circle are we talking about these days. Seems to me that the politics of this administration in Washington is found on a tangent, far from a rational/ideological scheme.

A lighter moment…. A Centennial
Scroll to top