July 24-25, the LaMoure Country Memorial Park at Grand Rapids will be celebrating its Centennial.  All details are here, which includes a link to North Dakota Covid-19 regulations, which will be updated and will be followed.  If you plan to go to this event, please check the website first. 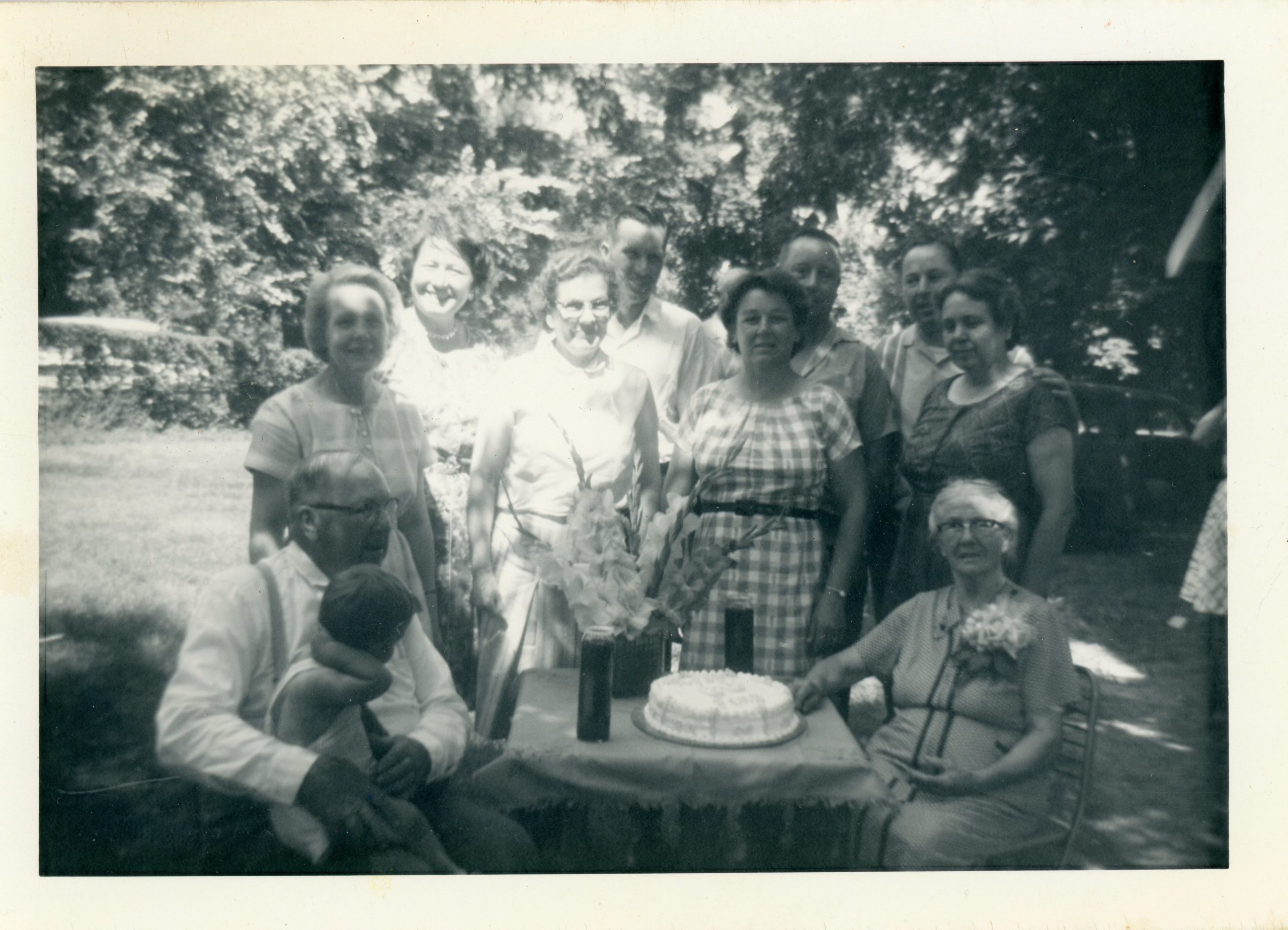 The Park has commissioned a wonderful memory book about The parks history.  There are over 50 pages of text and photos, bringing to life the 140 years the oxbow area of the James River a mile from Grand Rapids ND, has been used as a social gathering place for settlers of the LaMoure County area.  Seven members of the Busch family in the above 1965 photo appear in the probable 1921 photo at the park entrance (below, from page 32 of the book). 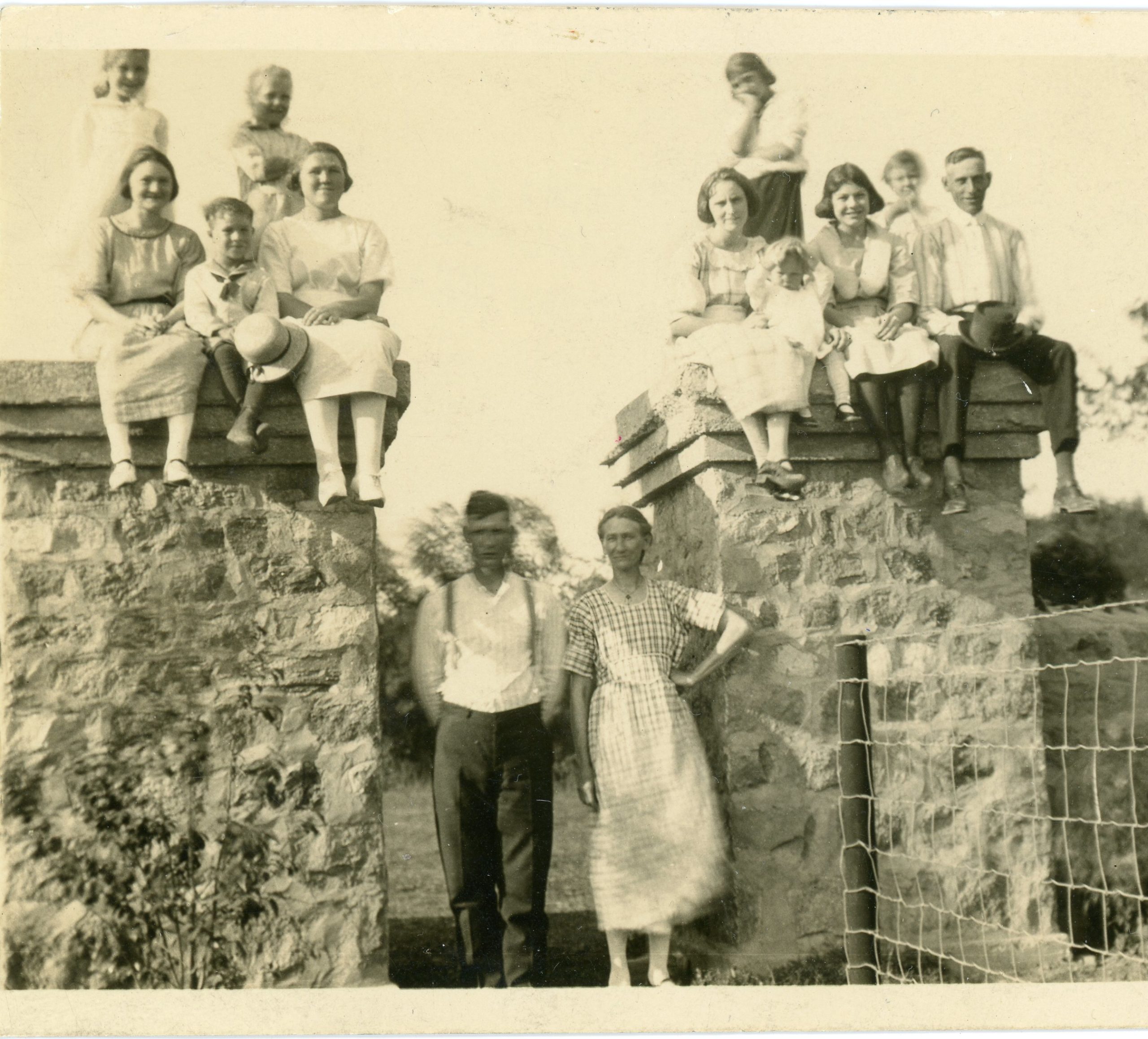 Busch kids and Dad at the entrance to LaMoure County Memorial Park ca 1921. At center are the parks first caretakers, Arthur and Lena (Berning) Parker, the Busch kids Uncle and Aunt.

Here is page 13 of the book: grand rapids chautauqua.  Chautauqua‘s took root for a time in the history of North Dakota and other states.  To this day there is a Chautauqua Park in Valley City, ND, an hour away from LaMoure County; another flourished about the same time along the Souris River near Tolley ND . The Chautauqua featured in this book included appearances by William Jennings Bryan and William Howard Taft.

My parents taught in tiny North Dakota towns from 1928 forward.  In their married days, Dad was almost always “Superintendent” – a title with more trouble than status.  That story is here.  I don’t recall a single town in which we had relatives.  Over the years, even though we might visit only once or twice a year, the place with constancy – home – was the Busch farm, about 5 miles from the Park.  Today, 80 years after my birth, all the Busch’s long gone, that piece of ground between Berlin and Grand Rapids remains an honored place in my life.

Dad grew up in Grafton.  He and Mom met at the place I called VCSTC, now VCSU.  In their years it probably was still called the Normal school.  They both started as teachers in ND country schools in about 1928.  In those years, such teachers had minimal licensure requirements, but were expected to continue their education each summer.  Dad finished his degree at Valley City in 1940.  Mom took a detour into ‘homemaking’ for some years, the way it was, then.  In all, they taught a total of 67 years.  One of Mom’s schools is one of the museum pieces on the grounds of the Park.  Her contract, I think for 1932-33, is probably still on the wall of the school.

The Chautauqua story in the book reminded me of a ‘Dad story’ written 1981 about a college memory at Valley City:

“[After high school] we could start teaching after one quarter of college provided that we had taken our senior reviews in high school…I did the usual class work…There were 1200 students enrolled and classes were large…At that time the summer registration fees included the tickets to the Chautauqua that was held each summer in Valley City.  It was near the end of the Chautauqua era and I believe that was the last big one held in Valley City.   We used to walk the distance from the college area to the park every night for the various educational entertainment.  I do remember that many people from the area would come and camp out to take in the activities.  It was the custom.

I don’t remember many of the events that took place.  I do remember Billy Sunday, a fire eating evangelizer, who preached fire and brimstone for about an hour.  I don’t remember much of what he said but his antics were sometimes bizarre.  He would start his sermon very calm but as he warmed up to the occasion he would take off his coat and tie, jump up and down on the stage and sometimes as a climax he would get up on the table and shout.  no microphones so they had to be leather lunged in order for the audience to hear.  I think most people were more impressed with his antics than with what he said.”

Back to the real world of the Park (which is what we called it), likely every time we came to the farm to visit, we went to the park before heading home.  We didn’t know the family lore, then, that Mom’s Uncle and Aunt, Art and Lena Parker, were the first caretakers at the park, and lived in the house at the entrance, or that it was on Uncle Art watch that the auditorium was constructed.  Etc.  In fact, we never met Parkers, since by our time they were long gone to Dubuque IA.

I’m convinced that my Uncle Art, born Oct. 1927, was named for his Uncle Art – that secret lies with Grandma and Grandpa Busch in St. John’s cemetery in Berlin….

When we came to the park, we came as kids, of course, so what attracted us were the rides, which were by today’s playground standards very primitive.  But who noticed, or cared?  They were our first destination.

Grandpa would connect with the old guys tossing horseshoes; Vincent would take us down by the little dam to fish for some bullheads.  Occasionally there might be a ball game, and of course something to eat, before we went back to the farm.  One picture shows folks playing croquet.

In 1993 we had our big family reunion at the park (picture below), and I remember that a week later a record breaking thunderstorm up in the Jimtown area coursed downstream, and the spot where we had stood for the reunion photo was under six feet of water.

Then there’s the above photo, from July 29, 1965.  I always thought that was taken at the park, but more likely it was taken at Florence and Bernard Wieland’s place north of Valley City.  My wife, Barbara, died July 24, 1965, in Minneapolis (kidney disease, age 22), and the funeral was in Valley City on July 29 and every family member was there, from Babbitt, and Tolna, and Dresden, and Hancock, and Chicago, and Dazey, and of course from the Busch farm.  Funerals are common for reunions, and this was no different.  The cake probably was for the nearby birthdays of Edithe and Esther….

Imperfect as the 1965 photograph is, it was essentially the same family posing at the park entrance 45 years earlier, 100 years ago: Ma, Pa and kids born before 1920.  Sitting on Grandpa’s lap was their first grandkid, son Tom, now 56 years of age, and one of those who came to the 1993 reunion.

Thanks to everyone, everywhere, who keeps local community heritage alive and well.  Most especially, thank you to those involved with the LaMoure County Memorial Park. 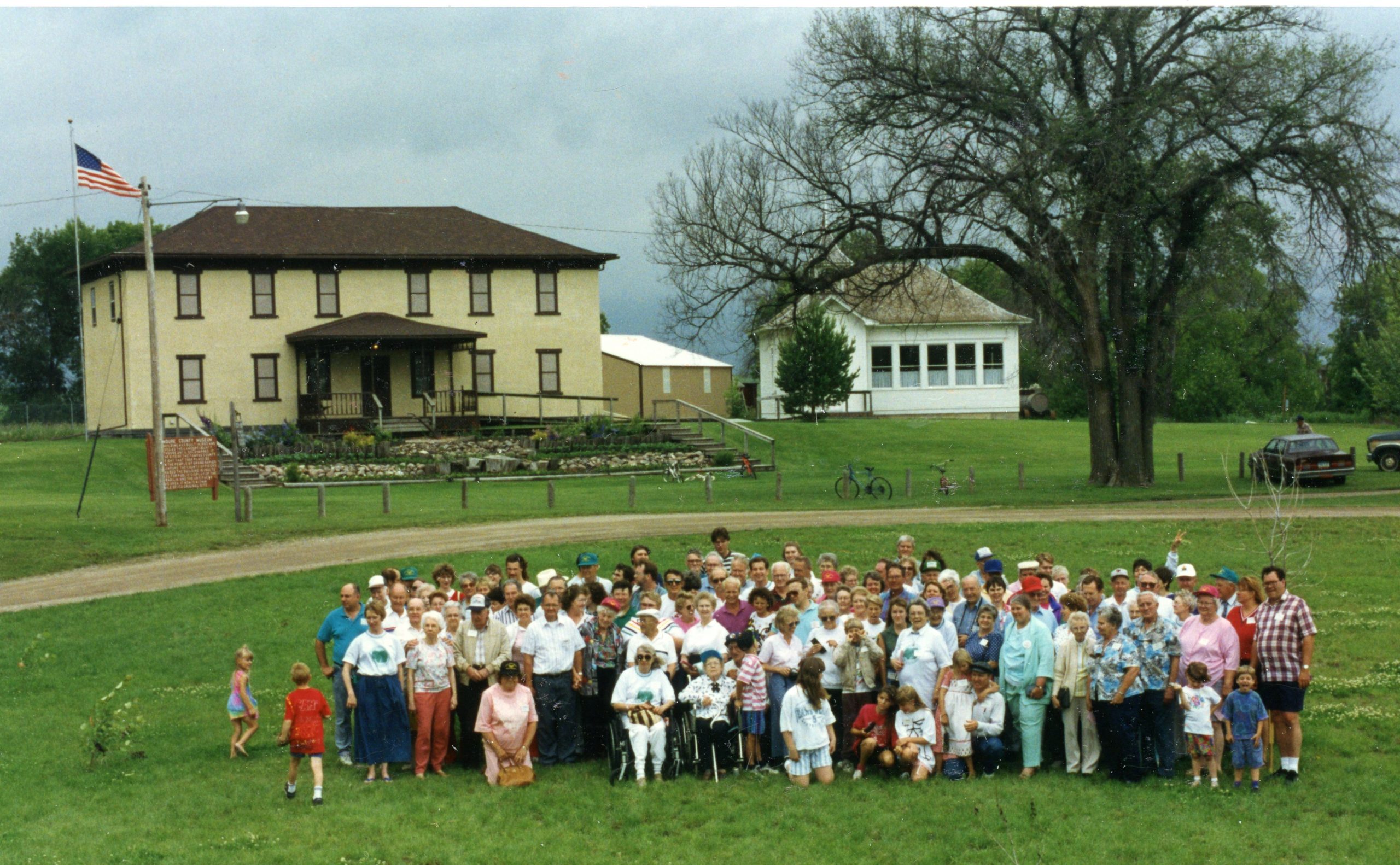 The Busch-Berning Archival collection continues in process at the North Dakota Historical Society in Bismarck.  The archival collection is 11082.  COVID-19 mitigated against a summer trip to Bismarck to complete the collection, which includes nearly 1,000 photographs from 1800s to 1972.

Ball game at the park, July 24, 1924 (photo probably taken from the roof of the caretakers house near the entrance.)

from Sonya:  This is a wonderful read! I love the connections your family had to the park. Many memories have been made at Memorial Park. It has influenced thousands of lives.  Thank you, Dick!

from Christina: My daughter in law gave me the book.  It is SO good.  I read every word.

from Myron: Thanks for sending this link to Memorial Park events. I have been following plans in LaMoure Chronicle. I have been to park many times. They used to have a LaMoure County Play Day when I was in grade school in Berlin. It was so much fun to go to that every spring. I competed in broad jump.  I helped start LaMoure County Summer Musical Theatre at grand hippodrome building in park.

from Darleen:  For a few years I spent the 4 of July at the park with both of my children.  We were there to celebrate the great grandma’s July 4 1896, birthday.  One yr there was a cake decorated as a flag.   Most of her family came.  It was a huge family so I didn’t get to know very many.   They were of [my husbands] maternal side of the family.