For many years, actually until quite recently, the prestigious Walker Art Center in Minneapolis had an impossible to miss work of art on its wall on Hennepin Avenue in Downtown Minneapolis: “Bits and Pieces put together to present a semblance of a whole.” (You can see its former presentation at Walker here.) I would guess the phrase was seen by millions of people, day after day – it was impossible to miss.
The phrase is no longer there. I cannot tell you what is there, now, though I go past the Walker as often as in the past.
I miss “Bits and Pieces”.
*
Random chance, literally, brought me face to face with Bits and Pieces in the last 48 hours. I did not plan my experience. Each quietly presented itself through invitations, or simply my marking time between one event and another.
Everyone of us has had similar glimpses of our real world, far from the mess we see constantly portrayed as “reality” on television or in the media. Here are mine May 14-16 in chronological order. What would some of your similar experiences be?
Saturday afternoon, May 14:
(Click to enlarge photos) 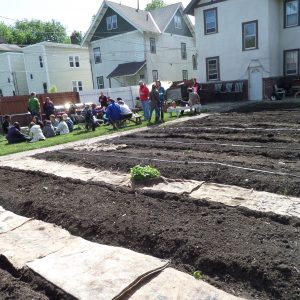 I was invited to stop by a neighborhood garden being planted by young people. This was no ordinary garden. Its produce will be sold to a well known restaurant in the neighborhood, Gandhi Mahal, whose owner believes in being part of the community. A group, Minnesota Interfaith Power and Light, is a driving force behind this initiative. All Saints Indian Mission and its First Nations Kitchen play an important role in this garden.
As I stood in that backyard, I thought back to my own old days, in the 1940s, Sykeston ND, when Mom and Dad had a big garden, and we kids had to participate in its care. I didn’t much like picking peas, or potato bugs, but somehow it now seems nostalgic and very positive.
A few hours later was a benefit concert for the Huntington’s Disease folks (the disease that got folk-singer Woody Guthrie). I stopped by the venue, left a donation, listened to a bit of the sound check by folk singer Larry Long, but passed on staying for the concert, which I’m sure was packed and outstanding.
Sunday, May 15:
Sunday morning was church as usual. I’m one of those people who like going to church; the people there infuse me with energy and optimism.
Afterwards I decided to stay downtown rather than drive home, as I was to be at another event at 3 in the afternoon.
What to do while marking the four hours? I started by proofreading part of a new book by our friend Annelee Woodstrom. This year is her 90th birthday, and her book will be her third. I don’t know how she does it, but she does. And each of her books have been profitable, as will be the third, I’m sure.
Her passion keeps her going. Her story is compelling.
I wandered back to the church to drop in on an event I knew was happening in the afternoon: the Blessing of Wheels, bicycles, motorized wheelchairs, and the like. This is an annual event. I’d never been before. It was brief, fascinating and uplifting.
I asked the lady, (photo below), if I could take her photo. Yes. She was to bring up the gifts, in this case, oil cans…. The brief ritual for perhaps 50 people, a basically non-sectarian but spiritual event, was really quite powerful – even for a non-biker like myself. Rituals have their place, an important place, in human life. In this case, even if you don’t own anything but a car with wheels. 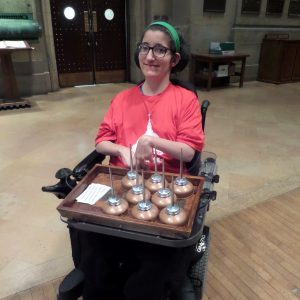 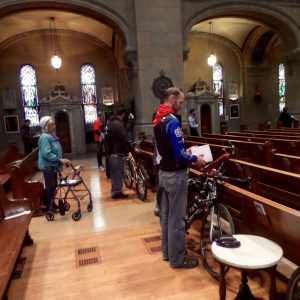 Then the main event for Sunday, the reason I stayed downtown: the Angelica Cantanti Youth Choirs at Orchestra Hall. I’ve long been an Minnesota Orchestra fan and have been in Orchestra Hall many times. This time was extra special. Up on that stage, amongst the several choirs for the 35th anniversary, were two of our grandkids, Kelly and Ted Flatley. The concert was two hours; they had prepared for this event for months. It takes work to get results…. 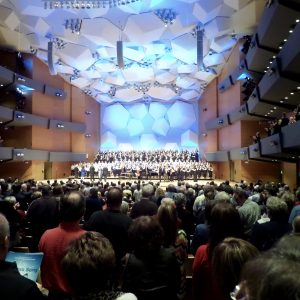 Monday, May 16:
Finally, yesterday, I ventured out to suburban Blaine, where the Middle School I helped open as a brand-new Junior High School in 1965, recognized its 50th anniversary as a school.
You begin to feel old in such a setting: 50 years ago I was 25, a third-year geography teacher of 8th graders. That is three generations ago.
Roosevelt Middle School, teeming with adults and students, was a very vibrant place yesterday afternoon. There were kids doing Shakespeare; musicians playing jazz, walls and displays full of student projects for parents and visitors. There was lots and lots of life in that place.
It was a great late afternoon. 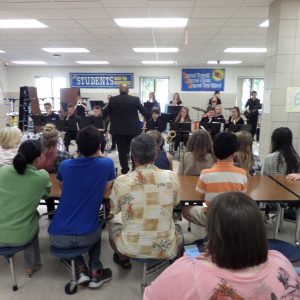 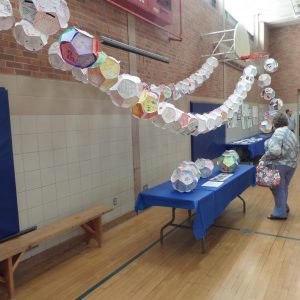 Event over, I elected to join a group of a dozen or so “old-timers” for a bite to eat down the street, and more conversation.
It was about 8:30 p.m., and I was on the road going east towards St. Paul, when one of the most brilliant sunsets I’ve ever seen showed up in my rear-view mirror.
Events of the previous 48 hours were already in context for me, but this sunset capped it. I thought back to the Saturday ritual in the backyard garden in Minneapolis, where a Native American elder helped the young people understand the significance of their efforts. 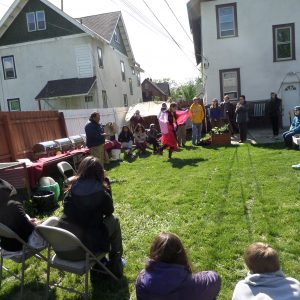 It was all good. Nature and Humanity in concert with each other.
Bits and Pieces has taken on a whole new life for me.
There is hope, lots of it, and it resides in every one of us, but it is the young who will have to make the difference.
*
The next few months will be filled with the mud-wrestling spectacle of national politics.
I can say that the last couple of days buoyed me up.
Look at the bright side. There is a bright side to this country and this world. Just look around you.
For some inspiration, check out Louie Schwartzbergs Ted Talk on Gratitude, which I first saw 5 years ago. You can access it here.
https://thoughtstowardsabetterworld.org/wp-content/uploads/2022/04/thoughts-300x138-1.jpg 0 0 dickbernard https://thoughtstowardsabetterworld.org/wp-content/uploads/2022/04/thoughts-300x138-1.jpg dickbernard2016-05-17 12:38:542016-05-17 12:38:54#1131 – Dick Bernard: Random Acts of Inspiration