Leila’s reminiscences are a part of a series of recollections about the place we called “STC” back in the late 1950s to early 1960s. The originating post is found here, at January 2, 2013.
(click on photos to enlarge) 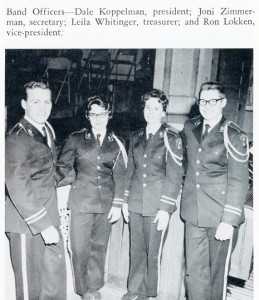 Memories of Valley City State Teachers College
By Leila Whitinger, B.S. 1963
I attended VCSTC from the fall of 1959 until graduation in spring, 1963. By the time I finished, I completed majors in both Biology and physical education and a minor in German. Nearly all of the electives I completed were in music, and I was a member of the band for my first three years. I also sang in the choir. For fun, I took voice and piano lessons throughout my years in school. Because of the diversity of my classes, I had a lot of opportunities to become acquainted with students having many different interests.
Unlike most of my classmates, I was not from North Dakota. I was born and raised in Michigan, where my nuclear family still lived. I was in a unique situation, in that I moved into a totally new environment and nine hundred miles away from home to attend college at Valley City. Others repeatedly asked me why I chose to attend school there, and I had a ready answer for them. I told them that my grandmother was in the very first class at Valley City, my mother got her standard certificate there, and two of my aunts were also students there. I was just keeping up the family tradition.
My mother’s family homesteaded near Milnor, ND, while North Dakota was still a territory. My father’s family didn’t move to the Forman area until 1914, but they had a deep history in the area. Nora Mohberg, my mother’s sister, had just completed her Bachelor’s degree at Valley City when I graduated from high school. She was deeply involved in writing area historical articles and books, so I grew up reading about the challenges of pioneer life on the prairie. My grandmother still lived in Milnor not too far from Aunt Nora’s farm. One of Nora’s sons, Robert Mohberg, was a senior at Valley City during my freshman year.
To me, I didn’t feel as though I had left home. It felt more as though I was returning home. My parents and most of their brothers and sisters left North Dakota during the depression and dust bowl after losing their family farms. While Mother frequently reminisced with warm memories of her days at Valley City, she rarely had much good to say about their life on the farm. Because Mother’s mother was still living in Milnor, she and my father made annual trips to visit her. It wasn’t until my high school years that any of my five siblings or I could go with them, since they generally traveled with Mother’s sisters who also lived in our Michigan hometown.
When we were finally able to accompany our parents, we had a chance to meet mother’s “dozens of cousins” and get acquainted with our grandmother. I knew that I wouldn’t feel like a outsider, since I was related through my mother’s family to a whole lot of Andersons, Ankerfelts, Ericksons, Fladeboes, Toftleys and Johnsons. Her father was one of fifteen children, and most of them remained either in southeastern North Dakota or southwestern Minnesota. We visited many of them during our visits throughout the years, so I already knew what North Dakota women mean by, “A little lunch.”
Aunt Nora took us to Valley City during the summer between my junior and senior high school years. I fell in love with the place the minute I saw it, and I think that I may have even gotten an application on that same day. Mother was horrified at the idea of my moving so far from home, but it helped that my home would be with her sister and that Robert would be a student there. It definitely wasn’t an easy sell, except for the fact that it was so much less expensive than Michigan colleges. 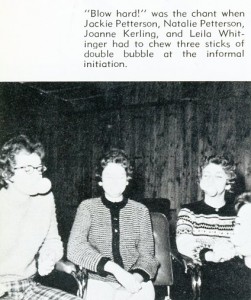 Blowing Bubble Gum – Leila at right – one of her favorite pics in the 1960 annual.

I had been planning to go to college from the time I was a very small child. I visualized a college as a small cottage in the woods, and it sounded great to me! By the time I got older, I could see that it would take a miracle for me to go to college because we had no money. Our father was critically injured when I was eleven years old and out of work for over a year. Because of his injuries, he was unable to provide much for the family. I started working and saving for college at that time.
I baby-sat, worked for the school recreation and hot lunch programs, and taught dancing at my sister’s dance school. I saved every nickel I earned during that time. I baby-sat for our senior class advisor on prom night because I didn’t want to waste money on a dress I didn’t need and would never use again. Outside of band and Spanish club, I didn’t participate in any extra-curricular activities. By the time I moved to North Dakota before my freshman year, I was exhausted. My cousins wondered about me, since I slept for almost the entire six weeks I spent with them on the farm before the term started. The hypnotic wheat fields, bright blue skies and quiet farm life agreed with me, and I relaxed for the first time in a very long time.
Aunt Nora took me to Valley City before the beginning of the school year to help me set up my dance school. Charlotte Graichen was very helpful to us, and I was able to start teaching during the second week of classes. I lived in the dorm, of course, and I loved it. I was in a suite with five other girls, and we became good friends very quickly. Perhaps it was because I grew up in a small one-bathroom house with four sisters and a brother, but it didn’t feel crowded to me. 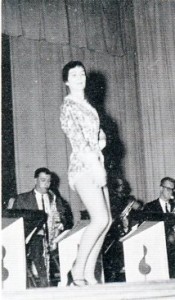 One of the benefits of living in the dorm was that my suite mates always brought “care packages” to me from their mothers. I learned about wonderful pfeffenusse cookies, krumkake, apfelkuchen and a myriad of other Swedish, Norwegian and German treats. On weekends, I was usually one of the few girls left in the dorm. Our housemother was a sweetheart to me. Mrs. Hedberg, AKA Hettie or Grendel, was also from Michigan. After my first week in the dorm, I requested a board to be placed under my mattress for support. I injured my back in a diving accident when I was fifteen, and was having problems with the mattress. In only a few days, she had a new firm mattress delivered to my room! I used it for the entire three years I lived there. When her sister sent Michigan cherries to her, she always invited me in to share them with her.
Marion Rieth mentioned something about wearing high heels to class. When I saw students going to class in high heels, I almost flipped. I remember asking myself, “Are they insane?” I started out wearing dress shoes, but quickly changed to tennis shoes. They had equally insane rules about wearing slacks, but nothing was written about shoes. By the end of the first term, most of the other girls from the dorm were also wearing tennis shoes.
The slacks issue was particularly galling to me, since it really was an outrageous rule. We weren’t allowed to wear slacks in any of the classroom buildings, cafeteria or library. I have no idea how many times I was kicked out of the library for breaking that rule, since I would often stop there after teaching my dance classes. It meant that I would have to go back to my dorm room, change clothes, and return to study. I quickly learned that logical arguments about subzero weather didn’t work, but it did motivate me to work towards getting rid of that rule. I also learned that I didn’t run into that kind of nonsense when I went to work in the biology labs in the evening. It took a couple of years for us to get rid of that rule.
I thoroughly enjoyed my experiences in band. Fred Koppleman was a senior during my freshman year, and he was an excellent percussionist. Before our very first practice, he showed me his award for being the national rudimentary champion of percussion instruments, along with a terrific photograph of him with his drums. As a percussionist myself, I had the distinction of being the only snare drum soloist earning a first place during the Michigan solo-ensemble festival during my senior year of high school. Art Froemke was still directing the band during my freshman year, and his eyesight was practically gone. He kept calling me Fred as we were practicing, so the rest of the band frequently called me Fred after that. I guess if someone is going to mistake me for a national champion, it isn’t so bad!
If I were to say that there were a lot of interesting people in that band, it would be an understatement. Because of my dance and choreography experience, I taught the chorus line for EBC Hit Parades, and that was a lot of fun. I learned that I would never be able to cut it as a straight man/woman to a comic after doing a sketch with Lynn Clancy. I was supposed to keep a straight face while I was asking him questions, but I couldn’t hold it together. I also learned that it is almost impossible to deliver lines when you are choking with laughter.
I especially liked Mr. Lade’s classes, since he gave me some of the best advice a science teacher would ever need. He told us not to waste our time memorizing science facts because they are constantly changing. He said that the most important skill we could develop is to learn where to find information when we needed it. He encouraged lifelong learning with that simple piece of advice.
For me, at least, my years at Valley City provided me with the experiences I missed during high school. I attended formal dances, and enjoyed them. I had time to sit around with girlfriends and be silly. My activities with my Delphi sisters are treasured memories. I became acquainted with countless terrific classmates and teachers who positively affected my experience at Valley City. All of that prepared me to teach, to advocate, and agitate throughout my career in education. I really don’t think that a large university could have done a better job. 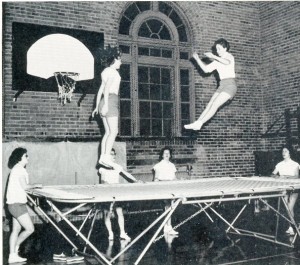 Leila at right on trampoline in Girls Gymnasium.