I met Mike when he was about 14 years old. He was my new girlfriend, Barbara’s, brother, 4 years younger than she. I don’t remember much about him then. Their younger brother, David, then 4 or so, more sticks in my mind. He was a really nice little kid.
This would have been about 1961, in Valley City, at their little house just south of Mercy Hospital.
Forty-six years later I was with Mike when he had his last meal at the hospital in Fargo. A few hours later he died, last survivor from his immediate family. I was his brother-in-law and had become the “go-to” guy and friend. At that last meeting I was able to show him what I still feel was the death certificate for his Dad, and where his Dad was buried. It seemed a very important deal for Mike. He knew nothing about his father, who’d left when he was two years old and there had been no contact at all after his parents divorced.
(click on photos to enlarge) 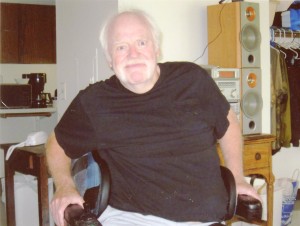 Mike, May 2007. His last few years he was paraplegic as an effect of aneurysm surgery – a high risk of the needed procedure.

In my memory, Mike always seemed “odd man out” in the family. In his last months, I made it my mission to try to find out, at least, who his Dad was. (The likely father died when Mike was about 9, turned out, and had been living about 150 miles from Valley City.)
From early on, Mike’d been on his own, so to speak. He probably reminded his Mom of his Dad; and his sister and brother were easier to be with. Mike could be mean.
Mike lived most of his final years a block from the walking bridge near the college in Valley City. Up the block was a funeral home; across the street was the Sheyenne River. Till she died in 1999, his Mom lived with him in the little house.
Mike would have been noticed in town, not necessarily in a positive way. He was a loner, sometimes odd looking, nocturnal. He seldom shopped, but seemed to tend to buy doubles of things: two pairs of the same kind of shoes, two identical coffee makers; two bottles of Coke…. He’d been mentally ill for many years, but was one of those who if they take their meds can get along. I gather he went through his own drug phase, sometime.
We all know people like Mike. People whose unattractive “cover” masks a “book” within. Often I see a woman pacing a small indoor mall near here. She is in her own world, seemingly oblivious to her surroundings, pacing quickly, talking loudly to herself. Recently, I asked a friend who works there about the woman. “She drives her car here”, she said, shaking her head. The lady probably takes her meds and is no danger to anyone, including people on the road.
For Mike, inside his “book” was great intelligence, and a refusal to give up.
He graduated from Valley City High School in 1965. When the few of us buried him in 2007, one of his high school teachers, Annie Haugaard, legendary Valley City teacher, said that Mike had been a good boy, a good student. She felt it important to say that about Mike. She knew a bit about him, inside that cover….
To my knowledge, no one attended his high school graduation as his sister, my wife, had just been admitted to University Hospital in Minneapolis with what turned out to be a terminal illness. All attention was on her, deservedly so. If someone went to the graduation to honor him, I haven’t heard about it.
Mike went on, and got his teaching degree at Valley City State Teachers College. Sometime in 1966-67 he had Mr. Kenneth Moore as a history teacher.
After graduation, he got a teaching job in ND, quite a distance from Valley City, in a school large enough to have 17 seniors. He taught there 1 1/2 years until he was fired. Thence he was drafted into the Army, where he served for two years, was given a secret clearance (which he honored, believe me), and was discharged as a Specialist 5th Class – a high ranking for a two year enlisted man. He had wanted to be a career man, but someone(s) in the little town where he had taught sabotaged his chances to continue in the military. The general allegation was lack of patriotism. 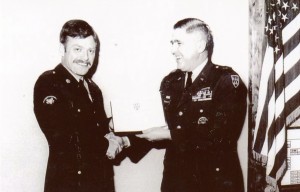 *
I know all this, because when I was cleaning out his house, which he’d lost when he stopped making payments, I found among his meager belongings five copies of a 22 page statement from a military interrogatory at his base in Germany, dated 23 March 1972. The copies were almost unreadable (a one page sample is here:Mike transcript 3:1972001 ) For some reason, that interrogatory was important to him; as was his Army uniform, which I found crumpled in a dresser drawer. The uniform now resides in the Archives at the North Dakota History Center in Bismarck, with Sp5 affixed to the shoulder.
I’ve read through the interrogatory several times, and given the questions asked, and the persons cited by name, Mike ran afoul of someone(s) in his employing school district, basically for the sin of allowing kids to talk about their opposition to the Vietnam War, then raging. He was assigned to advise the school paper, and apparently kids wrote about maybe going to Canada to escape the draft, etc., and he wouldn’t censor them. Some of the complainants are named in the interrogatory. Into the mix came the name of Kenneth Moore of VCSTC whose teaching methods were, according to Mike, “to get people to think”. “It was through him that I probably got some of my teaching ideas specifically talking about current events, rather than by just lecturing….” (interrogatory)
The interrogatory goes on and on.
An allegation is made about how Mike himself may have threatened to go to Canada to escape the draft. In response to a question he says “When I first came in [the Army] I didn’t want to be in…But to tell you the truth, since I’ve gotten out of basic training I have nothing really of consequence against the Army. As a matter of fact, of all people, I even talked to the Sergeant Major a few days ago about going to Airborne School….” He had never even thought about resisting the draft or going to Canada; but he hadn’t prevented kids from expressing themselves, however.
The charges, however groundless, apparently created a quandary for the military, which gave him a security clearance and promoted him to a high enlisted rank given his short term of service. Sometime around or after the Munich Olympic Games (August-September, 1972) he separated from the service with an honorable discharge after two years of service.
He never talked about the military again, to my recollection. And until I found that uniform crumpled in a dresser drawer, I didn’t know he had any artifacts of that time in history.
I have tried to find out whatever happened to his VCSTC teacher Kenneth Moore, with no success: it’s too common a name and from long ago. Apparently, Mr. Moore was only at VCSTC that single year, 1966-67, a year when the Vietnam War was truly raging. It was not unusual for young instructors to have short tenures at VCSTC: they were continuing their education. But I’m pretty sure that Mr. Moore’s teaching was noticed, and perhaps not positively, in those tense days when free speech wasn’t particularly free.
When I think of judging people these days, I tend to think back to my brother-in-law Mike, who in our brief visits taught me more than he ever learned from me. I salute him.
You’ll find him lying at rest with his mother and brother at Valley City’s Woodbine Cemetery. His sister, Barbara, is up the hill at St. Catherine’s cemetery.
Postnote: Some years before he died, he left brief instructions with the funeral home which handled his arrangements: “As far as any funeral service, that would be nice. However, I doubt if I would have more than two or three people attending. I guess I am kind of a lone wolf.”
In the end, at graveside, there were 6 of us. And later at the assisted living facility in which he lived his last few months (the 2007 photo above was taken there), perhaps 40 or 50 residents gathered for a very nice memorial service.
He may have been a “lone wolf”, but he was not alone. If looking in on his goings-away, he was probably surprised, and you might have even seen a little smile. 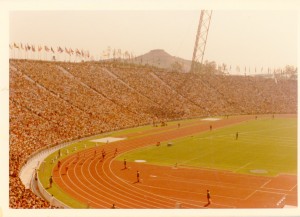 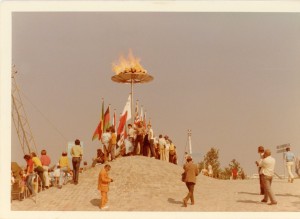