Today, Pope Benedict XVI officially resigns, the first Pope to do so in hundreds of years. It was a wise decision, and hopefully a good precedent to be followed in future years. The official (church approved) story of Benedict XVI was this handout, which was available at Basilica of St. Mary last Sunday: Pope Benedict XVI001
I won’t make any predictions about Benedict XVI’s successor. I understand that all of the electors – the current College of Cardinals – were appointed either by Pope John Paul II or Benedict XVI, so anyone wishing for dramatic change, even minor change, will probably be disappointed.
John Paul II‘s Poland was overrun by both Germany and Russia, and his boyhood home, Wadowice, which we drove past in early May 2000, was less than an hour from Oswiecim (Auschwitz-Birkenau), so his political imprinting was very strong; Benedict XVI came of age in Adolf Hitler’s Germany, and the Catholic Church was at its authoritarian best then and there. The emergence of a new John XXIII from amongst the current Cardinals is not very likely. Indeed, John XXIII surprised the world after his election in 1958.
One thing is sure: the Chair of Peter, the fisherman who was the first Pope, could not have imagined the world of 2013. I’ve been at the supposed spot on the Sea of Galilee where the mantle was passed to him. Then was a simple time. Even today, looking out over the large lake-size “Sea”, you can imagine what it might have been like, then, over 2000 years ago.
Now, we’re about seven billion humans; one billion of those who are called “Catholic” by some criteria or other, probably 10% of those Catholics, at best, much care what the Pope decrees. The Papacy is a complex institution, at best. But it still has a very big microphone, and proclaims to speak with authority.
I’m lifelong Catholic, active. Even at age 72, the succession of Popes I’ve experienced is a short list:
Pius XII (1939-58) was Pope during the entirety of my growing up years. It was his face that was on the wall of the Catholic Churches and Schools I attended.
John XXIII (1958-63) was Pope during my college years. Vatican II was on his watch, beginning officially after I completed college (1961). But even in college times, the ecumenical breezes were blowing. I noticed recently in the 1961 College Annual at Valley City State Teachers College, that I was one of ten on the Inter-Religious Council. A few years earlier, such rapprochement would have been unacceptable, regardless of denomination. Catholics, Methodists, Lutherans…all in the same room? Astonishing!
Paul VI (1963-78) doesn’t excite any particular memories, though it was in his time that birth control was rendered sinful, even though his advisors advised that there were no theological problems with birth control. We’re still struggling with that teaching. Basically, Catholics have ignored it ever since. I recall watching portions of his funeral while at my brother’s home in Salt Lake City in August, 1978.
John Paul I (1978) died after only one month as Pope. The circumstances of his death remain controversial.
John Paul II, the Polish Pope, (1978-2005), had a long reign.
One time in my life, October 14, 1998, I saw John Paul II in person, in the Popemobile, at the Vatican in Rome. (Facebook album of seven photos here.) I can attest that even if in an ideal position, as I was, long before the Pope appeared, attempting to take a photograph of the Pontiff, even a poor one, is not an exercise in sacredness. You either photo, or pray, not both. The best potential photo was this one:
(click to enlarge) 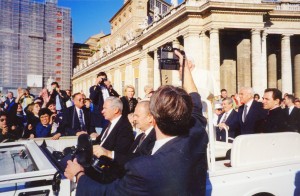