“What are you doing New Years…New Years Eve?”
For us, our six year old grandson will be an overnight guest tonight. That makes for a reasonably predictable “New Years Eve”.
As for the year just finishing, and the year ahead: 2011 depends on the interpreter; 2012 is as yet unknown. They’re all important, these New Years. Collectively we’ll be fashioning that six year olds future in the days and years ahead. We’re all he and all of his cohort, everywhere, have to depend on.
My favorite blogger, Alan, writing from LA, summarizes the year now ending in today’s Just Above Sunset posting.
His columns are long, but always a worthwhile read.
Earlier this week I took a stab at what’s ahead by reflecting on a college newspaper column I came across from November 3, 1960.
What I wrote follows: (if you’re one of those who wants to ‘cut to the chase’ read the bold-faced sections.) 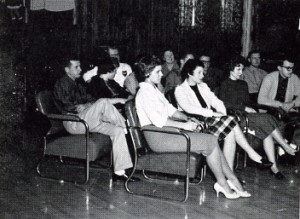 Watching the Election Returns, November, 1960, in the "Rec Room" at Valley City ND State Teachers College. (from the 1961 Viking Annual)

“A TIME TO THINK”
I’m old enough to live in the fog of the “old days”.
But there are lessons…and teachers…from that past – people who are most often ‘anonymous’ or ‘unknown’. Here’s one such lesson, from someone called “Mac”.
Over 50 years ago – it was September 23, 1960 – a headline of the Viking News at Valley City State Teachers College (STC) proclaimed “Bernard Chosen as Viking News Editor”.
That fellow, Bernard, was me. Somebody concluded that I’d do okay at the job. Newspaper adviser Mary Hagen Canine kept copies of the fourteen issues published ‘on my watch’, and somehow the issues and the memories they record have managed to survive until the present day.
When that first issue published in late September, 1960, Richard Nixon and John F. Kennedy were vying for President of the U.S.

NY Gov. Nelson Rockefeller had whistle-stopped Valley City in June. He was a possible Republican candidate. I went down to the City Park to hear him speak.
In that first Viking News, I wrote an editorial, part of which referred to a column on the same page called “Meditations” by “Mac”. Mac, I said, was “Charles Licha [who] attended STC several years ago”. He had returned “for his last quarter before graduation. He is married and is the father of five children, and presently holds the rank of Captain in the U.S. Army.”

November 3, 1960, right before the election, “Mac” wrote a long column including a section, “A Time to Think”, directed to we students, many of us not yet 21 and thus ineligible to vote.
The column would fit today as well as it did then:
In part: “Walking down the hall the other day, I was suddenly struck by the thought that here at STC, a wonderful thing is taking place. I’m speaking specifically about two tables that are placed in close proximity to the rec room door. As closely as I can determine, one of these tables is strictly Democrat while the other is strictly Republican…What party are you for? Which man do you think is the Best Man? What are your reasons for your choices? Even if all of you are not of voting age, every one of you should have an answer to these questions and others questions equally as important.
He continued, “just remember that a portion of this country is yours, just as surely as though you held title or deed to it! For that reason the selection of the Chief Executive and lesser dignitaries charged with the affairs of the nation and the individual states should be of immediate concern to you. An attitude that smacks of “My one vote makes no difference, “I won’t vote because I don’t like either man,” or “I just don’t have the time” is not only anti-patriotic and stupid, it’s anti-you, and a direct denial of your responsibilities.”
Capt. Licha died in 1975 at only 48. By 1965 he was a helicopter pilot in Vietnam (scroll down for photo). He had earlier served in WWII and Korea, and was career Army. Residual effects of Malaria contracted in WWII contributed to his death at a young age. The last few years of his career he taught ROTC at North Dakota State University in Fargo.
Compared with the rest of we collegians, he was a ‘senior citizen’ of 33 when he wrote his column.
He spoke much wisdom 51 years ago.
We his modern day contemporaries might well listen, reflect on his final piece of advice: to “vote intelligently and wisely” in 2012.