This afternoon I stopped at the Woodbury Post Office to mail several packets of material.
I’m a familiar face there, and I mentioned to the clerk that I was going to do a blog post about the post office this evening.
“Oh oh”, she said, expecting the worst. This time of year people in the delivery business don’t expect kudos. “Bad” sells better than “good” on the media and the internet….
She had no reason to worry.
I want relate a story about the cousin of the little guy pictured below (click to enlarge): 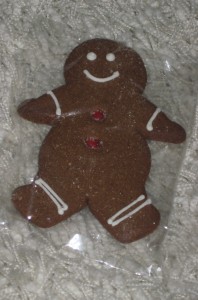 I purchased some Gingerbread men at the November 27 Minnesota Orchestra performance of Hansel and Gretel. The program, of Engelbert Humperdincks classic, was superb. (Check YouTube for many samples of Hansel and Gretel.)
The evening was in celebration of the Centennial of the Orchestra’s Young People’s Concerts, as explained in the evenings program: MN Orchestra YPSCA001. The Gingerbread men (persons?) – the dessert for the evening – were a fund raiser of/for the Young People’s Symphony Concert Association (YPSCA).
Of course we sampled the men, but there were some left over. For sure, one was saved for our friend, Annelee, who grew up in Germany. We’d see her at Christmas time and hand deliver hers.
Another I decided to send to a friend in a distant state who I knew had, years ago, been a docent for the Orchestra.
The question was, how to get the little man to a home perhaps a thousand miles away….
I decided to try the U.S. mail.
My packaging was de minimis.
I had some empty photograph boxes from the local Proex, and put Gingerbread Man in one of them, and ‘cushioned’ it with similar boxes top and bottom. I wrapped the resulting ‘box’ with plain brown paper, addressed it, and took it to the local post office. Christmas mailing season was upon us, and I stood in line. When it was my turn, I gave the clerk the box, paid the postage and left. I simply sent it ‘priority mail’. No insurance, no special handling.
I was so sure it wouldn’t arrive ‘safely’ that I took the above photo and sent it to my friend, just in case it arrived in pieces. Nothing ventured, nothing gained.
A couple of days ago came a note from far away: “The cookie was whole – no cracks or crumbles.”
Success. Thanks to the people of the United States Post Office.
Sure, in an enterprise as immense and as complicated as the Postal Service, or any other delivery service for that matter, there are occasional problems.
But as it has been for its entire history, our Post Office is one of the very best services we can hope to have.
Happy New Year! And thanks to all of you who serve the rest of us, when sometimes we aren’t at our best.
Related post, here.
UPDATE December 31, 2011: In the post office line about 12:30. There was quite a lot of business at the time (it ebbs and flows, not always predictably). One worker was on duty, two stations open, they were probably at lunch. A guy went up to the counter, saying he’d been in line “an hour”. I decided to check traffic flow, which seemed normal. At the time, I was 12th in line. A second worker appeared. Perhaps twice as many in line would fill the post office – the longest lines I normally see. It took 20 minutes for me to get to the counter for service – that was less than two minutes per customer ahead of me. Of course it seemed like longer, if that was one’s mindset. Most of the problems ahead of me were we customers, ill-prepared or whatever. I don’t see how the post office could make any modifications that would eliminate complaints, fair or otherwise. People do need to have lunch. Cutbacks are taking place, and more to come (someone behind me said “it’s going to get worse”). Interesting how our little ‘society’ in the line sees the postal world; and what we can learn about ourselves. I wonder how the postal workers see us….
UPDATE January 1, 2012: From Joyce, Dec. 31: The USPS has come in for a lot of criticism this year from the right wing – too many on the right are looking to privatize this vital national service. Considering the volume of mail the USPS has to process every day, the postal workers do a wonderful job!
Also from Joyce, Jan. 1: Your addendum reminds me of how subjective the passage of time can be, depending on the circumstances and one’s mood. Specifically, I had a new family practice resident at a delivery [of a baby] with me, and I had to resuscitate the baby with a bag and mask. Afterward, the resident and I debriefed together because he was obviously shaken; he marveled that I had been “bagging” the baby for at least 20 minutes, and I had to tell him that I was timing it, and the whole episode lasted no more than 20 seconds. He found that really hard to believe, but I had to point out that the second apgar score, which is done at 5 minutes, was 9 out of 10.
https://thoughtstowardsabetterworld.org/wp-content/uploads/2022/04/thoughts-300x138-1.jpg 0 0 dickbernard https://thoughtstowardsabetterworld.org/wp-content/uploads/2022/04/thoughts-300x138-1.jpg dickbernard2011-12-29 20:12:532011-12-29 20:12:53#493 – Dick Bernard: A compliment for the Post Office as the year ends.