The “filing cabinet” on the Minnesota Orchestra Lockout is here.
Thursday, February 11, 2014
We attended the first post-Lock Out Concert at Orchestra Hall on February 8, 2014. This was an evening of immense emotional energy, with the Orchestra led by the father of Orchestra Hall, Maestro-Emeritus Stanislaw Skrowaczewski. The entire program, eight pages, is here:MN Orch Feb 7-8 2014002 This concert, and the one to follow this weekend (we attend on Feb. 15) seem to be “bridge” concerts between the 488 day Lock Out and a to-be determined future of this “family”, which is the Orchestra Management (MOA), the Orchestra itself (including the Conductor), and we in the Audience.
The Minnesota Orchestra is the essence of the perfection of a team sport: excellent players, outstanding conductor and an engaged audience make the team. The team was cooking on Saturday night.
On Feb. 8 all was in resonance.
I hope the good feelings continue, but….
I didn’t write immediately after the concert as the last three days have been devoted to family matters in ND. My Aunt is, as I write, near death in a fine nursing home. She is 93. In the next room is her 89 year old brother. Neither ever married. They are the last living members of Grandma and Grandpa’s family of 9.
There’s was a musical family, as country families often were. Their Dad was a school-trained fiddler and had a small band for local dances. To this day, Vincent is an excellent singer. Many of the kids and descendants of my grandparents are musical.
For their entire lives until 2006 Vince and Edith lived and worked together on the pioneer farm built by their parents, and when heart problems ended the farm career for my Uncle in 2006, they moved into Assisted Living, and then into the Nursing Home in nearby LaMoure ND. [Note 9:20 a.m. Feb 12: Aunt Edith passed away at 1:05 a.m. The funeral is Saturday. We’ll have to miss the Saturday concert, 5th row center. Anyone interested in the tickets at cost? Inquiries welcome. dick_bernardATmeDOTcom.]
My Uncle and Aunt are very familiar people to me. Often I would spend a week or more at the farm in the summer, helping out with whatever.
They were like all families: connected, yet disconnected. They had different personalities and different skills and different interests. They had their resonances and dissonances.
In other words, they were like the rest of us, regardless of what relationship we might have with some significant other.
With all the magnificence of the evening inside the hall on Saturday night, my thoughts following the concert have more focused on what recovery from the long lockout will ultimately look like for the big “family” that is the Minnesota Orchestra community.
Most of us with any seniority in living a life in any “community”, be it marriage, employment, brother and sister (like Vince and Edith) etc., etc., have at one time or another experienced peaks and valleys. I don’t need to be specific. Think of some instance where you, personally, experienced some huge hurt, followed at some point, and for some reason, by reconciliation.
The reconciliation is its own temporary “high”.
But it is a very temporary high; and to maintain and rebuild and improve requires a huge amount of work and compromise by all parties to have any sense of permanence at all.
So it is going to be with the three-legged stool that is the Minnesota Orchestra: the musicians/conductor, the management, the audience.
If last weekend, and the coming one, are considered to be the end of the past, everyone is sadly mistaken. They are only the beginning of the beginning of a new era with the Orchestra, and everyone will be on edge as this progresses…or not.
There can be no “business as usual” if this enterprise is to succeed long term.
In Saturdays program booklet, I was most interested in the words on the “Welcome” page (page two), pretty obviously written by committee consensus, and I read with even more interest page seven, about Beethoven’s Eroica. Whoever chose Eroica to highlight the first concert back in Orchestra Hall probably chose this work intentionally. Read especially the second paragraph of the descriptor, and the last.
The power of the Minnesota Orchestra to come is going to depend on a true spirit of working together by all three legs of the stool: orchestra, management, audience.
We’ll see how it goes.
And Peace and Best Wishes to Aunt Edith, and to Uncle Vince, in this time of transition for them both.
(click to enlarge) 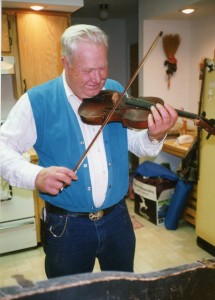 Uncle Vince “fiddles” with his Dad’s farmhouse fiddle, Oct 1992. Grandpa had a country band and learned violin by use of sheet music. 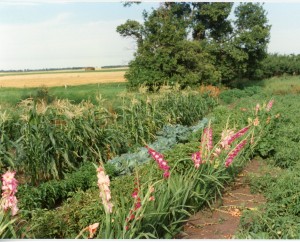 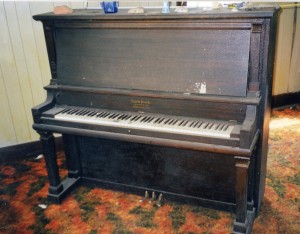 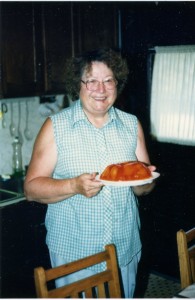