UPDATE, August 20, 2013 9:45 p.m.
A short while ago we drove east from Minneapolis, driving into the Full Moon rising. The sky was clear and the view was spectacular. Pity that I only had my small camera, with which I took this snapshot. The moon was, for me at least, a positive harbinger of the future for the Minnesota Orchestra.
(click to enlarge) 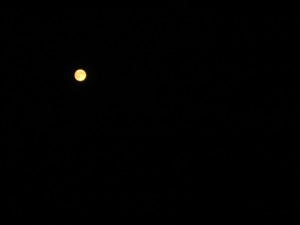 We had just attended, along with several hundred others, a Community Forum on the Minnesota Orchestra Lock-Out. The extraordinarily well run event was conducted by an apparent ad hoc organization, Orchestrate Excellence, and co-featured a keynote speech by Dr. Alan Fletcher, CEO and President of the Aspen Music Festival and School, and a large number of moderated small groups, largely of strangers together, dealing with two questions:
1. Does Minnesota want a world-class orchestra, and why?
2. What will you, as a community member, do to support a world-class orchestra, and how?
Dr. Fletcher’s talk is available at The UpTake and is well worth your time.
The handout we all received is here: OrchExcel 082013001
We thought our time to be very well spent. Ours was a diverse group, 13 of us, with diverse opinions, but we were talking.
If you have even a little interest in the Minnesota Orchestra Lock-Out do take time to print out the handout, and watch the video, and enter into your own conversations within your own circles.
Personally, I think tonights meeting, along with other events recent and pending, mitigate towards a settlement, which must be between the two parties to the bargain. If I’m right, the settlement of the contract will only begin the hard part: to move ahead to heal and rebuild.
It won’t be easy.
Tonights full moon was, I found out, a Blue Moon. I’m not much of a moon person, but I liked its rising as we came home this evening. For some reason it brought a feeling of hope.
Here’s the earlier post…. 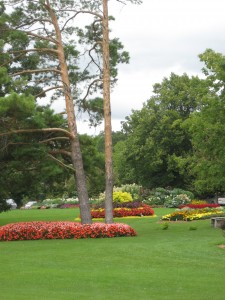 This day this blogspace was to be about pretty flowers in a wonderful pastoral setting about 300 miles from our home in the Twin Cities!. Our tour guides on August 8 were Annelee Woodstrom, and her friend, Joyce Schlagel, who suggested we drive from their home in Ada to the Bergeson Nursery in rural Fertile MN.
The afternoon was a huge treat, and I posted 22 snapshots in this Facebook album. If you can’t access them, I’ve sprinkled two photos from the pastoral farmyard within this post. 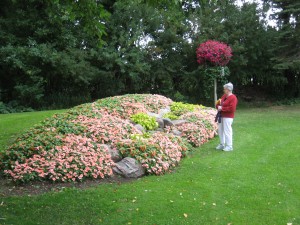 Flowers can speak for themselves, but they speak as well for those who nurture them.
More compelling to me, right now, is the continuing tragedy of the Minnesota Orchestra Lock-Out, nearing twelve months, with the next two weeks crucial.
I need to start by correcting a mistake I made in my August 16 Post. It is marked by [*] in the third paragraph, and acknowledged in the last two paragraphs. It was a foolish mistake, that I had no reason to make. I apologize.
Of course, mistakes do not begin and end with me.
One of the more memorable dissertations on owning a mistake is one I heard years ago, at a meeting, where a woman quoted her mother: “never apologize”. Nothing more was said about why the Mom said that to her daughter, at the time long an adult, but it stuck.
This morning I reviewed my entire Lock Out file. It is a couple of inches thick, my personal reference point for this disaster. It includes my letters to the Board: Nov. 24, 2012, to every Board member; Jan. 10, 2013, to the Officers; Feb. 18, 2013 to the Executive Committee.
There is one reply which seems genuine, dated Jan. 8, 2013, from Jon R. Campbell and Michael Henson, but it is just too perfect. It reminds me far too much of a letter I received about 1965 from a downtown Minneapolis office. I had been raising a complaint about some small and (in my mind) unjustified bill, and finally got a long letter, typed in the fashion of the day, with the salutation “Dear Richard I. Bernard (or anybody else)”. With that, I paid the bill, satisfied I got somebody’s attention.
The Lock Out of the Orchestra by Orchestra management was a horrendous mistake, and the “never apologize” rule is likely to be applied here by those same managers whenever this issue is over.
But sooner or later there will be a settlement, hopefully not imposed, and my signal to begin supporting the Orchestra once again will be an enthusiastic ratification of the agreement by members of the Orchestra Union.
They are, all of them, heroes to me.
It is time for a beautiful sunrise out of a stormy sky, such as the one I saw this morning enroute to coffee, and hurriedly snapped. 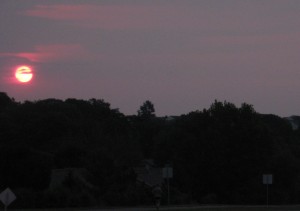