NOTE: The “Filing Cabinet” for items regarding the Minnesota Orchestra Lockout, including far more than past posts, can be found here. Supplements to the below post can be found at May 25, 2014, at the end of the Filing Cabinet.
Feb 14, 2014, very shortly after the lock-out ended, I wrote a brief e-mail to ticketing at the Minnesota Orchestra: “We are ticketed for Saturday evening Feb 15, but cannot attend due to a family funeral in ND on the same day.” A most gracious ticketing representative wrote back: “I am sorry for your loss. This concert was a non-exchangeable purchase, but I made an exception due to the circumstances. I have placed the value ($120) of the tickets onto an exchange voucher for you to use for a future performance.”
We looked at the options, and decided that “Bugs Bunny at the Symphony II” sounded like fun.
Thus, last night found us at a packed Orchestra Hall with the real maestro, ever self-assured Bugs Bunny, assisted by on-stage stand-in Maestro George Daugherty.
I cannot imagine a more enjoyable evening. The entire program is here: Bugs Bunny MN Orchestra001 (The usual prohibition on photography, etc., was not recited, thus the couple of photos (sans flash) which appear below.)
If Bugs Bunny comes to your town, see him!
(click to enlarge photos) 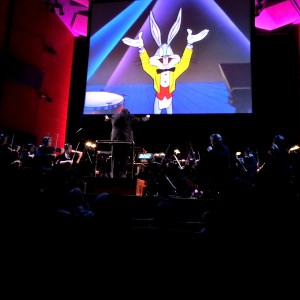 It’s a fools errand to try to summarize Bugs Bunny and ensemble, including a magnificent Minnesota Orchestra filling in for the Hollywood Studio Orchestras so common in the olden days in which Bugs Bunny and his many colleagues came to be well known. Competitors like the Roadrunner, Elmer Fudd and many others shared the screen at one time or another in the evening.
It brought me back to the now old days. In my childhood we very rarely saw a movie, but when we did, the 7 or so minute cartoon was always part of the preliminaries. Over 50 years ago, in college, I spent a year and a half as doorman and assistant manager at the Omwick Theatre in Valley City ND, so saw at least bits and pieces of many cartoons from that era.
The Orchestra music was snuck in on unsuspecting younguns back then, and what a delightful fallout it had. Who in my age range doesn’t remember The Lone Ranger theme from the William Tell Overture?
Creator/Conductor George Daugherty gave extended comments at two points in the concert. Our mostly adult audience was heavily laced with kids, and we were all having fun, but he said we were no match for a packed house of elementary school kids on Friday afternoon.
We’re still very early in the healing time from the 488 day lockout of the Orchestra, just ended Feb. 1, 2014, so that was on my mind too. Back in January, we were faced with the possibility of a permanent parallel season funded by the members of the Orchestra itself. A full line-up of stellar concerts were planned. Last nights program booklet was a clue that Bugs Bunny had been scheduled as an alternative concert before the lockout ended. It is not the usual Showcase edition we now receive; rather the more simple booklet we received during the lockout concerts.
Maestro Daugherty was effusive in his praise of the musicians on stage with him, and presented to them a print by Chuck Jones, the animator and director who built the Bugs, etc. empire.
In his bio (linked above), Jones recalled the power of children imagination: “Jones often recalled a small child who, when told that Jones drew Bugs Bunny, replied: “He doesn’t draw Bugs Bunny. He draws pictures of Bugs Bunny.” His point was that the child thought of the character as being alive and believable, which was, in Jones’ belief, the key to true character animation.”
Later in his life, Jones created paintings of his characters which are now in the Smithsonian Institution. One of them became a limited edition print, and at his appearance in Minneapolis, a print was presented to the members of the Orchestra for hanging in their break room.
It was a neat touch.
I’ve been an activist in the Orchestra situation since it began so long ago, and I recall an early on comment by a retired band and orchestra director in a Twin Cities public school, lamenting the diminished attention to the Arts. She said this June 21, 2013: “As a retired … music teacher, I am aware of the cuts to grades K-12 vocal and instrumental music, that started about 1980. As public schools eliminated music classes, so disappeared the process necessary to build an audience base-development for the MN Orch. If instrumental music is reinstated in grades K-12, today, it will still take 20 years to rebuild the arts tourism community that will purchases season tickets to the MN Orch.”
In so many ways, kids are the future. 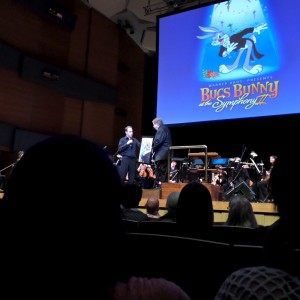 Presentation of the Chuck Jones art work to the Minnesota Orchestra musicians May 24, 2014

POSTNOTE: Todays Minneapolis Star Tribune carries an interesting perspective by Bonnie Blodgett: Diminuendo: the dying sound of stewardship among the ruling class.
Earlier this week I was at the ancestral farm in North Dakota, a place now going to seed because its occupants have all passed on, save my Uncle, who is now in a Nursing Home and will no longer make his frequent trips to the home place. I brought back a couple of boxes of photo albums, just for inventory and safety purposes, and in the same closet found in a ramshackle weather-beaten case the Clarinet my Uncle once learned how to play as a youngster. In the same collection was a newspaper column sent from my Uncle’s older sister, Mary, dated June 17, 2002: Cousin, Violin maker001 Carl, the subject of the article, played Grandpa’s fiddle with much feeling and expertise at a family reunion over 20 years ago.
My family, like most, is not one of substantial means; like only some, however, it has a very strong musical tradition.
The wealthy, who seem to run things (including into the ground), and are more dominant than ever, need to pay close attention to their real “base”, which is people like us.
COMMENT:
from Shirley L, May 25: A delightful report about a wonderful experience! We all need a little Disney in our lives now and then. Thanks!
https://thoughtstowardsabetterworld.org/wp-content/uploads/2022/04/thoughts-300x138-1.jpg 0 0 dickbernard https://thoughtstowardsabetterworld.org/wp-content/uploads/2022/04/thoughts-300x138-1.jpg dickbernard2014-05-25 19:31:022014-05-25 19:31:02#887 – Dick Bernard: "What's up, Doc?" Warner Brothers Presents Bugs Bunny at the Symphony