St. John’s Cemetery, Berlin ND, May 21, 2014. Verena’s headstone is to the right of the Busch family headstone.

Tuesday morning we laid Aunt Edith to rest in the St. John’s Cemetery in tiny Berlin ND. Seven family members were there, including Edith’s brother, our Uncle Vince, whose entire 89 years had been spent with his sister, who was 93 when she died February 12, 2014.
The next morning I was talking with a guy I hardly know, my general age, and the topic of death came up. “Do you ever think about dying?” he said, then going on to remember his Mother who died days after a terminal cancer diagnosis; and his Dad, dying just minutes after having coffee with his son, and declining to ride along up to “Jimtown”.
Death is the one constant for every living thing. All we don’t know with precision is exactly when and how.
I’m guessing the vast majority of us hope that when the time comes, at least one other person will care enough to care that we passed on, and will acknowledge that we made at least a little positive difference sometime in the time we were passing time on earth.
I’m also guessing that someone’s death is more a time for the living to reflect on their own lives, already lived and to come. The deceased has no reason whatever to worry about what hymn was sung, or so forth. The ritual varies culture to culture, place to place, but there is a constancy. 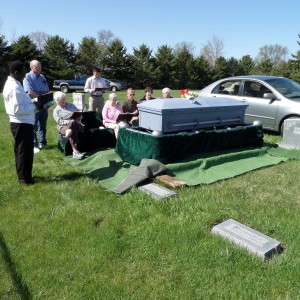 Graveside May 21, 2014. Edith’s grave next to that her mother, Rosa, and father Ferdinand Busch. Fr. Jerome Okafor presiding. Brother Vincent nearest the car.

Which brings me to the title of this post “Ten Plots”.
Back a few months, when the possibility of death of one or the other sibling seemed ever more likely, I inquired about burial plots at St. John’s just outside of Berlin ND. The sexton looked at the map and said the Busch’s had ten plots reserved in the cemetery, which surprised me a great deal.
No family narrative exists laying out the reasoning for this purchase; which gives me free rein to speculate.
Ferd and Rosa Busch married Feb 28, 1905, and immediately thereafter moved to their new patch of ground about five miles northeast of Berlin. Nine children were born to them.
In early May, 1927, when the third child, Verena, was 15, she died of peritonitis. Hers was the first family death. It was a devastating event for the family.
Vincent, then two, recalled looking for his sister.
Edith, then nearing seven, was very well aware of the death of her 15 year old sibling.
It was a terrible time for Mom and Dad.
My speculation – and it is only speculation – is that when they purchased the burial plot for Verena in the then-rarely used cemeteries, they purchased lots for their entire family.
Of course, time went on. The youngest child, Arthur, born in Oct 1927, may not have been counted in May, 1927. Except for Vincent and Edith, who stayed on the farm, all the other “kids” moved on. They are listed at the end of this post.
Of the ten plots, only five will likely be used.
But they stand as silent testimonies to life, and to death.
We’re all “on deck”. Make the best of the time you have left! 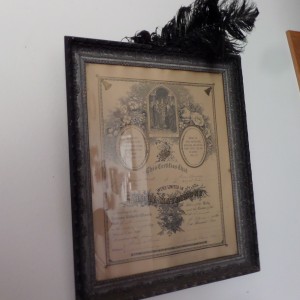