(click on photos to enlarge.
blurriness in closeups is free of charge…teachers are animated, hard to catch quiet!) 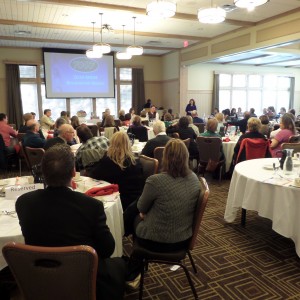 Part of the large crowd May 13

Tuesday night found me in Andover MN, across the table from Robbyn, a lady whose name tag identified her as teaching at Roosevelt Middle School in Blaine.
The name tag brought me face-to-face with my own history: then-Roosevelt Junior High School opened nearly 50 years ago, August, 1965, and I was one of the faculty, then beginning my third year in teaching, who opened that building.
I’ve known that fact for all those intervening years, of course, but it was the name tag that made the difference.
Robbyn and I were among what appeared to be well over 100 present and former leaders of Anoka-Hennepin Education Minnesota (AHEM) gathered for what I think was the 15th annual year end celebration of a school year about to completed, with all the ups and downs one can expect in a huge school district, geographic and otherwise: the largest school district in Minnesota.
MC was President AHEM President Julie Blaha, using her best “lunchroom supervisor voice” (the PA system was down for a bit) to review the past year, like all years, significant in many and sundry ways. 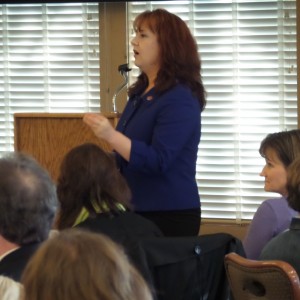 The whole concept, “Union”, has been abundantly kicked around in recent years generally by the old trick of labelling: pick what seems to be a bad example, publicize the daylights out of it, then expand it to cover everyone: “they’re all alike”.
Of course,Unions are simply groups of people working together to represent their interests. They are not ‘cookie cutter’ models. In the teacher union context, I have watched our Union evolve over more than 50 years. Any teacher Union (we always called ourself “Association” – same difference) is a conglomeration of differing priorities and concerns: men, women, elementary, secondary, coaches, special education on and on and on.
In a teachers union, there is considerable negotiations to simply get to Negotiations.
When I began teaching in 1963, the heavy predominance of teachers was female, but the informal leadership was most always male; and the ones in charge were the Superintendent and School Board. The hierarchy was firm and defined. The change began about the early 1970s in Minnesota, and there were some years of getting accustomed to new realities on all “sides”.
Among 26 Special Guests on Tuesday, 15 were women; all six receiving Special Recognition were women; the outgoing (in all ways) President for the last four years is a woman; she succeeded another woman; her successor next year is a male…. The Union State President, in attendance: a woman. These days, in this very large Union, it appears that things like gender or grade level or position on the pyramid no longer make a difference.
They certainly used to, back in the good old days.
It’s a very, very good change.
There was pride in that banquet room on Tuesday. You could feel it. These were folks who had dealt with the struggles of professional work life in a complex suburban school district and had survived.
Two leaders, Bill Davids and Suzanne Quinn-McDonald, received Lifetime Achievement Awards. To be honored by your peers is the greatest honor. 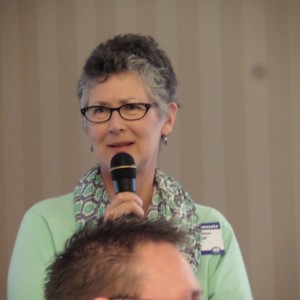 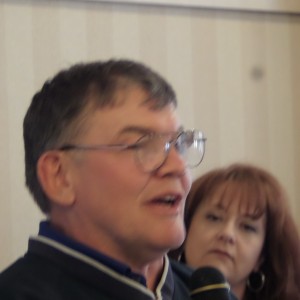 Then there’s some of we “old duffers”, leaders from the past, all of us who helped the Union along beginning in the early 1960s. Maybe “over the hill”, but not yet under it…. 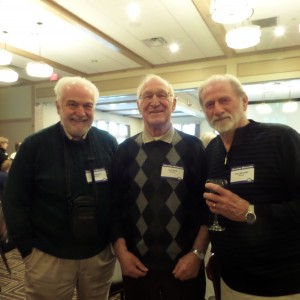 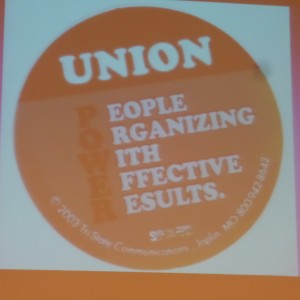