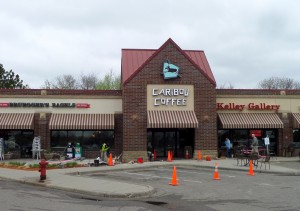 Scene of the action: Caribou Coffee at City Centre, Woodbury MN May 12, 2014.

My coffee mate Steve and I usually quietly occupy our respective corners by the front window at Woodbury Caribou Coffee. Today he suddenly whipped around to watch the action on the sidewalk the other side of the window.
As action goes, what we saw outside wasn’t much. A guy was by with one of those saws to break the bond between blocks of sidewalk concrete.
The task for the next crew, sometime very soon, will be to take out the old concrete and replace it with new.
Of course, Steve had to quip: “they have to fix the sidewalk so that some old guy [presumably me] won’t trip coming in here.”
Fair enough, but a bit much to take from a young whippersnapper, scarcely five years retired.
Young pup. Who does he think he is?!
Talk got around to sidewalk superintending, and I remembered a YouTube piece I saw a year or two ago, with a cameo of my grandfather, Henry Bernard, watching them pave Main Street in Grafton ND. Turns out the piece was filmed in 1949. You can watch it here. Grandpa appears at 4:15 of the 5 minute video. He has three seconds of fame, maybe, and he’s one of only two old birds who gets his own name affixed to the video.
“Old bird”? In 1949, Grandpa would have been 77, not much older than I am now.
In the fashion of the day, he was dressed up, even to do this sidewalk duty. White shirt, tie and straw hat. He’s pointing out something or other to one of the other nearby folks. He had a first grade education in Quebec, and a first class engineers mind: he had been chief engineer in the local flour mill ‘back in the day’, and he loved to see how things worked. He’s recorded as the guy who drove the first motorized fire truck to Grafton from somewhere or other; fire chief and all around first class guy (and tough in bar fights too, I heard). At his funeral in 1957 all the VIPs of Grafton attended.
Back home I went out for my walk and coming east on Lake Road I approached an older guy standing motionless, looking at something off to the side.
He just kept standing there.
Finally I reached him, and saw the reason: he was watching some guy put new siding on a house.
Just continuing the fine tradition of sidewalk superintending. Doubtless remembering something from sometime.
We chatted a bit, and I walked on.
Thanks, Steve, for the memories.
Re the job specialty: “Sidewalk Superintendent”, the pays lousy, but the hours are good, and sometimes the work can be quite interesting! 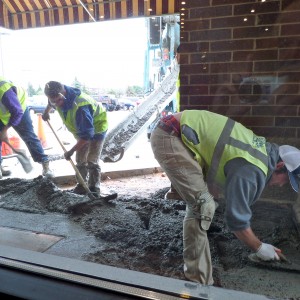 May 12: As I left,I asked the guy who seemed to be supervisor, “how do you keep idiots like me from walking in the wet cement?” He just smiled. Another kibbitzer remembered working on these crews as a summer job long ago; and wondered if there’ll be someone carving initials before it dries….
POSTNOTE: Like most ordinary people, Grandpa seldom made the news, which for most of us is a good thing.
Some years ago, cousin Loria Kelly in E. Grand Forks happened across a powerful account of Grandpa and Grandma in Los Angeles in the winter of 1942. You can read it here: Bernard Los Angeles 2-42001
https://thoughtstowardsabetterworld.org/wp-content/uploads/2022/04/thoughts-300x138-1.jpg 0 0 dickbernard https://thoughtstowardsabetterworld.org/wp-content/uploads/2022/04/thoughts-300x138-1.jpg dickbernard2014-05-12 20:02:322014-05-12 20:02:32#884 – Dick Bernard: New Cement: Memories of Grandpa Bernard
0 replies