UPDATE: August 21, 2013: This important link forwarded by John B, received from “my niece, an attorney in Albuquerque. She once worked for the MN Orch Youth Symphony and is a cello player from St. Olaf.”
August 24, 2013: In the 23rd Star Tribune an article appeared on page B3 of the Metro Section giving management site on the Domain name issue (referred to in the above link). The article did not appear in the on-line edition, at least was not found, but is now accessible. Here is the STrib link. Here is a pdf of the actual article in yesterdays Star Tribune: Orch Domain names001
The musicians website: here
Previous posts about the Minnesota Orchestra Lock-Out: October 18, 2012; December 7, 2012; June 1, 2013; June 5, 2013; June 21, 2013; July 26, 2013; August 16, 2013; August 19, 2013.
When I began blogging in March, 2009, I had no idea what would evolve. Over the years, I’ve obviously been prolific. I’ve also noted that I’m eclectic – I am interested in lots of things, some passionately, and sometimes topics take root, like the Minnesota Orchestra Lock-Out, now near a year old.
We went to the Community Forum about the future of the Minnesota Orchestra, sponsored by Orchestrate Excellence, last night, and I included a brief report and the links to the video and the handout here. I would urge taking the time to access both handout and video, and I would also suggest joining Orchestrate Excellence network (click on “Join the Coalition” tab). Orchestrate Excellence seems to be reasonable folks with an objective of keeping our World Class Orchestra intact, and finding some way to settlement.
I know collective bargaining all too well: it was my job for 27 years. My colleagues and I worked in diverse ways with thousands of collective bargaining negotiations and agreements in that time. We dealt with upsets, small and large, and occasional strikes (really pretty rare). Never do I recall a Lock-Out, and certainly no Strike that lasted anywhere near as long as this Lock Out has prevailed. The geniuses who devised and sold the Lock-Out strategy give meaning to a favorite country-western tune of mine: “What was I Thinking”.
But…that’s what they thought, and the way these situations often times go, once committed to a strategy, one follows it till death. And that’s the scary part of this conflict. The longer this Lock-Out has continued, the harder the cement in which feet are planted, and the bar for a “win” gets higher and higher. On the Union side, there’s nothing left to lose; on Management, a single-minded focus on destroying the Union. Very, very unhealthy.
We arrived early enough last evening to give me time to walk around the block and see the now infamous Lobby. I took a few photos.
(click to enlarge photos) 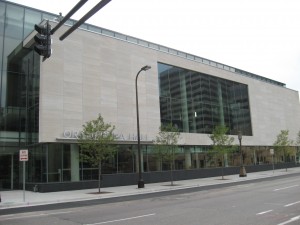 It was more than a little ironic, seeing “Orchestra Hall” on the side of the building, since the musicians who make up the Orchestra have been locked out without pay or benefits since October, 2012. And, of course, with the absent Orchestra, similarly locked out have been those of us who are called “Listeners”, the “Audience”.
As I walked down Nicollet Ave I noted through the window of the still-incomplete lobby a single step-ladder being used for something. Step-ladders are useful tools for achieving a goal.
I wondered what “step-ladder” exists to end the War at 1111 Nicollet Mall. A one-sided “victory” will be a Pyrrhic one, with no good end. Perhaps that Pyhrric event has already occurred. I hope not.
In our small group last night, I made a couple of comments which tend to summarize my feelings at this point in time:
1. The settlement will have to be made by the two parties to the bargain, the Orchestra Management and Orchestra itself.
2. As for us, the Locked Out audience, each of us in our own way need to do something; and that something should be a bit beyond our normal self-imposed limit. We can’t afford to sit on the sidelines. The ball is in our court. Last night was an excellent organized kickoff bringing together people of diverse opinions, all who care deeply about the future of our Minnesota Orchestra. 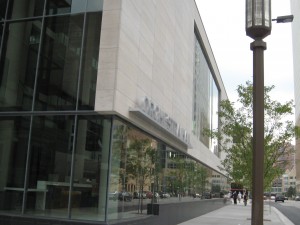