Note comments as received which are included at the end of this post, and as Responses.
Prior Post: here
Musicians website here.
Tonight, June 1, was supposed to be our last concert for the 2012-13 season of the Minnesota Orchestra (MO).
Yesterday, May 31, I went down to view the under-construction area at Orchestra Hall, 1111 Nicollet Avenue, Minneapolis. Here are three photos:
(click to enlarge photos) 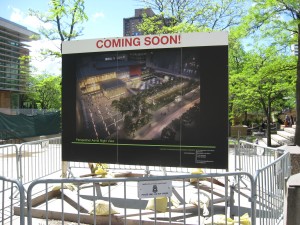 The vision of the building. I was most struck by the police sign on the fence surrounding the illustration. 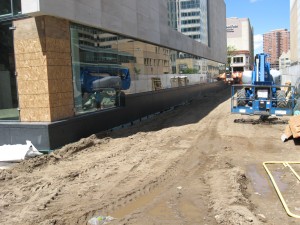 The north end of the hall, the under construction new lobby would be to the left. 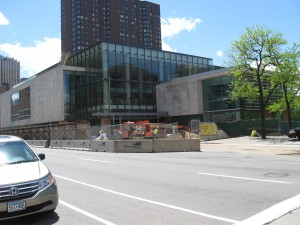 Orchestra Hall from 11th Street. The sidewalk immediately in front of the hall has no holes for “sidewalk superintendents” and security appears tight.

Of course, there is no concert tonight. The entire season was cancelled, bit by bit, over the last eight months. The Orchestra was locked out, as was, to little apparent notice, everyone of us who normally fill the auditorium seats.
There have been occasional appearances by the LoMoMo (Locked Out Musicians of the Minnesota Orchestra). We were privileged to attend the first one October 18, 2012.
Earlier this week I submitted a perspective on the Lockout to the Minneapolis Star Tribune. It was apparently declined. My proposed column is found following the photo of the tickets (below).
I don’t feel as moderate as my commentary suggests.
Seeing angry comments in print in Minneapolis’ major paper was unlikely as this lockout has been and remains a “mover and shaker” issue, and my criticism would be of the “movers and shakers” who make up the invisible Board of the Orchestra, and by extension the downtown Minneapolis and Hennepin County Power Structure. (One of those invisible MO Board members is the Publisher and CEO of the Star Tribune.)
These 80 or so MO Board members are the folks who decided to authorize and to continue the Lock Out. (A lockout is simply a management version of a Strike.)
This management strategy has failed, resulting in an entire season destroyed, and the future is very uncertain.
Revisiting my long career in collective bargaining, I cannot recall, ever, as incompetent a bunch as this Minnesota Orchestra Board when it comes to the most basic of customer relations.
This very large Board seems to have no sense whatsoever about, or no interest in, its real base, we people who pay to come to hear and appreciate outstanding music performance.
The MO Boards apparent devotion is to its immense endowment (investments), and new lobby. Both are useless without an orchestra to showcase world class music, and an audience to appreciate it.
In struggling for an analogy that might give context to non-MO readers of the proposed article (below), I finally compared the 2012-13 fiasco to a theoretical similar scenario in a small school district somewhere in the metropolitan area. How would the community accept a decision to close the schools for an entire year made by a faceless School Board unelected by the public and thus unaccountable to the community?
Not well, I reckon.
Would what happened in that single school district impact on the other communities?
Ubetcha. Communities, even large ones, do not live in isolation from one another.
Over the months it has occurred to me, a long-time subscriber, that I wouldn’t recognize any current Board member if I ran into them on the street or, for that matter, at Orchestra Hall. They may as well be anonymous.
It is unlikely that there will ever be admissions that any mistakes, even small ones, were made by the large MO Board. The “wagons are in a circle”. But it was the Orchestra management who created this lockout, and thought it could force capitulation by its musicians.
I congratulate the musicians.
There will be a settlement, sometime.
Whether there will be a recovery is another question.
We ordinary folks, one by one, need to find our voice and act in the many ways that we can to save this Orchestra. It is not enough to blame, or say we can do nothing. We need to act. 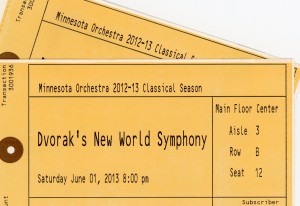 Tickets to the last scheduled concert for the 2012-13 season of Minnesota Orchestra. Like all the other concerts, this concert was cancelled due to the lockout.

The submission to the Minneapolis Star Tribune, May 29, 2013:
June 1 is our last Minnesota Orchestra Concert of the 2012-13 season: Dvorak’s “New World Symphony” plus other pieces.
We’ll do as usual: come in from Woodbury, attend afternoon Mass at our Church, Basilica; have a light dinner at the Hilton Saturday evening….
That’s been our pattern this year, as it has been for many years: six concerts (plus occasional other miscellaneous programs at Orchestra Hall); seats in Row 4, directly behind maestro Osmo Vanska’s stand. Good seats.
Oh…I just woke up.
That June 1 concert I mention was cancelled a few weeks ago, and before that, the 5th program; and before that the 4th, 3rd, 2nd, 1st.
This year our tickets were to be at the Minneapolis Civic Center auditorium while they built a new lobby at Orchestra Hall.
But we and our colleague concert goers (some might say “customers”) were Locked Out an entire season by the management of the Minnesota Orchestra, and we’re supposed to believe the narrative that it is the Musicians Union who are at fault.
We know better.
My file labeled “MN Orch 2012-2013” keeps growing.
Minnesota Orchestra is more than just an Orchestra – it is a world-class Orchestra.
But most people in this metropolitan area probably don’t much care about what is happening down at 11th and Nicollet Avenue.
As I’ve witnessed the destruction of the season this year, I’ve tried to put this unique community of MnOrch in some understandable perspective, if only for myself.
What does this disaster mean to our metro area and to our state?
Imagine a school district with about 150 teachers, whose School Board simply shuts down the entire system for an entire year, then blames the teachers union for the shutdown. What about the students and their parents, who are the customers? [edit June 1, 2013: I think the actual Orchestra – the Union – was less than 100 when this lockout began, and has already shrunk considerably as members leave for other places.]
That’s a reasonable comparison.
Full disclosure: I spent 27 years full-time in and around collective bargaining in Minnesota. It was my career. My colleagues and I managed in many assorted ways negotiations and administration of literally thousands of Minnesota school district labor contracts.
I thought we saw it all, one time or another.
Never in my experience, or in “war stories” we shared, have I heard anything similar to this wreckage of my Orchestra by faceless people – the Orchestral Association Board – none who I’d recognize if I ran into them on the street, anywhere.
Months ago, I wrote each of them – over 80 – a real letter, with stamped envelope, sent to the only address I had: Orchestra Hall.
Not one sent so much as an acknowledgement.
Quite often in my own personal experience with collective bargaining there were bruised egos and even, on very infrequent occasions, a strike, though never anything even remotely approaching the length of this lockout.
Bargaining is not a simple conversation, where one side dictates the answer.
But always there was a settlement. Seldom were there strikes preceding; never were there lockouts.
At some point – maybe tomorrow – there will be a settlement to end the Minnesota Orchestra disaster of 2012-13.
Will we be back in our prime seats whenever the settlement happens?
If it’s up to me, I’ll be back only if the musicians through their union ask us to return.
We don’t go to hear the Management, or to sip wine in a fancy lobby; we go for the Orchestra.
There will be no Dvorak’s “New World Symphony” on Saturday night.
The movers and shakers of this state best get their act together and settle this conflict. The reputation of our community is damaged. 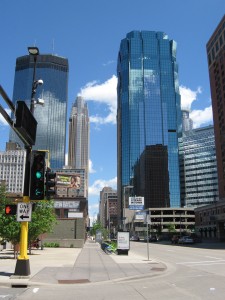 From Alan, June 2, 2013: I just cannot believe how disrespectful this board is towards their musicians and their patrons. I cannot believe that they have any understanding about what these musicians go through to get to the level so that they can perform in the blind auditions and get acceptance to be hired at that level.
What kind of management would spend 50 million dollars to improve their plant, Orchestra Hall, which I believe is the most pathetic building that houses a major orchestra in any city in the country for a city of our size. Over 10 % of the seats cannot see the entire stage. On the third tier, close to the stage, you have at the most a 20 to 25% view of the stage, and the sound there is pathetic.
The building should have been built like the Ordway, not as deep and twice as wide so that every seat in the auditorium would have a straight on view of the magnificent orchestra that we used to enjoy. The plaza could have been designed to be in the rear of the building. After this building was built, and it was discovered that all of the seating did not have a complete view of the stage, the words architectural blunder appeared in the paper just once, and then never again.
4th row is great seats. We used to have seats in the center section on the left aisle in that row for many years. I myself never went to hear music, but to watch music being made. That location allowed me, if there was a pianist, to see his or her hands on the keyboard.
My own daughter performed as a sub (violist) with that orchestra when Leonard Slatkin was the conductor. One of the letters stated that only 52% of the seats are filled for concerts, Are they blaming their marketing shortcomings on the orchestra members? It appears that to me. 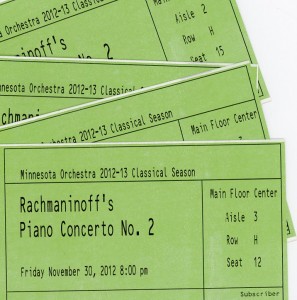 Cancelled Concert Nov. 30, 2012. This was a special event including our 83 year old friend, and his friend.

from John, June 4, 2013:
Beginning last September when I got first word of this lockout I have been
“on this case.” Likely you have the MOMO website, and there you can see
among “replies” my letters there. From the outset of this mismanagement’s
lockout it has been clear that they own no loyalty to our musicians and to
Osmo Vanska. For me this string of lockout cancellations has been one of
the major disappointments of a life that has been, since my mother’s
teaching of music, altogether fascinated by the world of classical music.
Anger about this is mine as well. I am also fully embarrassed by the
inaction of the powers that be, including our governor whose former wife has
been such a loyal supporter of the MO.
From the start the faceless Board has aimed to destroy the musicians’ union.
Years ago I served on the Board of the Inter-Faculty organization, a
thoroughly weak representative of faculty on the then-seven campuses of the
Minnesota State University System, and I have seen mismanagement in church
settings as well. Dick, the barbarians are storming our gates. Perhaps not
even the group of attorneys that I have repeatedly invoked, could turn
around this situation.
In any case, there is no publicly visible effort to
do that. Not only are we losing our Minnesota Orchestra as we have known it
under Osmo Vanska superb world-class leadership as Music Director. We are
also witnessing another terrible blow against unions and workers’ necessary
right to organize for their own right to exist.
Many thanks for your outrage and its effective expression, John
https://thoughtstowardsabetterworld.org/wp-content/uploads/2022/04/thoughts-300x138-1.jpg 0 0 dickbernard https://thoughtstowardsabetterworld.org/wp-content/uploads/2022/04/thoughts-300x138-1.jpg dickbernard2013-06-01 09:34:162013-06-01 09:34:16#727 – Dick Bernard: The Disastrous 2012-13 Minnesota Orchestra Season. A subscribers view.