We went to our subscription season opener on Saturday evening, and it was, as always, a delightful experience.
Andrew Litton conducted a program of Richard Strauss: Don Quixote: Fantastic Variations on a Theme of Knightly Character; Salome’s Dance (Dance of the Seven Veils); Suite from Der Rosenkavalier.
It was a marvelous, fun program.
Through the program I kept thinking of a bookend someone gave me once, that sort of reminds me of Don Quixote, for some odd reason. Here it is (yes, it badly needs a dusting): 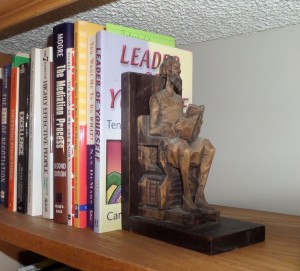 We’ve now been to several performances of the Minnesota Orchestra post-lockout (the lockout began two years ago, September 30, 2012, and ended in early February, 2014.) We’re glad to be back, and the people we see seem to be so as well.
Lurking not far in the background, reasonably, is the long impasse. But we’re moving on, it seems.
These days, I have begun to make sure I look at every page of the program booklet, just to make sure I don’t miss anything.
In Saturdays Showcase, for Sep-Nov, 2014, came a most interesting article, “a continuum of contributions”. You can read it here: MN Orchestra Oct 2014001. It speaks for itself.
Doubtless much effort and edit and review and revision went into the article. One can look for what is said, and what isn’t, and in what order of emphasis (which is as meaningfilled as the text itself)
I felt it a reasonable representation of the current reality.
One wonders, however, how the gap between the $10 million anonymous donor, and the equally anonymous $1 donor, will be bridged.
Money talks, the more money, the more the listening.
But the small folks are now, as before “the franchise” that is the Minnesota Orchestra. None of these folks are on anyone’s address book, but in the long run they will make all the difference.
As for us, we’re glad we’re back, and looking forward to a great season ahead. Yes, I’m a Guarantor (I think about $500 worth over my career). Nonetheless, we’re invited to a special performance led by Osmo Vanska next weekend. Quite likely we’ll go….
Nice touch.