This will probably be modified later today (it’s 10:30 AM CST). Comments are solicited.
There are three photos, below, which may be of interest.
Last night I watched a portion of the Opening Ceremonies at the Sochi Olympics. It was an impressive spectacle, as usual. I saw the Americans come in, and the Russians, and I particularly noticed the tiny team from Jamaica, minimally funded but there, and assorted team members using assorted means to make their own movie of what they were experiencing…. (I’m too old fashioned to ever get used to the now common practice of using those big notebooks to take pictures – doesn’t look like photography, regardless of how professional the quality can be!)
Anyway, the entire script has been written to please the advertisers and the news media and business and the politicians. Those are the only reasons for the Modern Day Games, in my opinion. The cast for the Big Show are those who will win or lose, bringing home the gold, or (mostly) not. Embellishing or diminishing for a moment in time someones national pride.
I’ve never had so much as a close call to the Olympics themselves.
Back in 1983 I took a job representing teachers on Minnesota’s Iron Range, and early on I heard the story of the teacher-parent of one of the U.S. Hockey Players (remember “Miracle on Ice”, Lake Placid 1980) who had trouble getting personal leave time to watch his (or was it her) son play hockey for the U.S. against, ultimately, the Russians. Rules are Rules, you know. I wasn’t personally involved in the case, but it was still being talked about. I suspect the parents went to the games, with or without “leave”….
The Winter Games.
Then a few years later I used to attend conferences in Colorado Springs, and just down the road, on my walking route, was the famous Broadmoor Hotel, and on the grounds was one of the training facilities, I seem to think it was Figure Skating, but I might be wrong. Just now, I learned that Colorado Springs is where the U.S. Olympic Committee resides (see here).
And I must mention Salt Lake City, 2002. My brother has lived in Salt Lake City for years, and on visits since have seen some of the venues for that games.
The Olympics is a huge economic (business) enterprise.
Perhaps my closest call with the Olympics came when I was cleaning out the house of my reclusive brother-in-law, Mike, in the early 2000s, and found there a little box with about 40 snapshots, all taken in about 1972, about half of them at the Munich Olympic Games. At the time he was a GI in Germany, and went to the games as a spectator.
This was the games of the hostage masscre, perhaps the first games where the word “terror” became a part of the games narrative.
Mike’s photos are just snapshots, and they likely were taken in the early days of the games, before the hostage crisis dominated everything. But they are interesting to look at nonetheless.
(Click to enlarge) 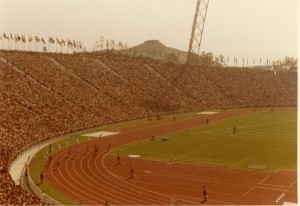 At the Munich Olympics 1972 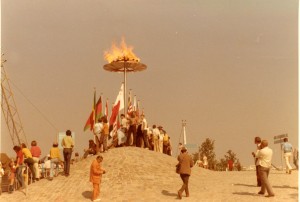 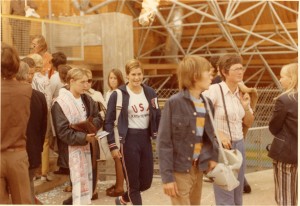 Munich Olympics 1972. Not sure if the young woman is an athlete or not.

I suspect I’ll watch bits and pieces of the Winter Games this year, as each Olympiad. But they are not of compelling interest to me.
Hopefully there will not be any bigger news than what we’ve seen so far.
Congratulations to the Russians and best wishes for a good Games.
POSTNOTE: Shortly after writing this post, I was standing in a post office line and chatting with a lady about my age. Conversation got around to the Olympics, and pretty soon she said, “my kids wanted me to fly to Arizona for a bit to get away from the cold, but I said no, you never know what will happen”, with the obvious overtones that somebody might highjack or blow up the plane.
There was no reason to pursue this discussion: fear is a powerful thing. On the way home I wondered about the incidence of terror related incidents aboard planes. Obviously, there’s 9-11-01 over 12 years ago; and there was an attempted high-jacking in the Ukraine in the last 24 hours. But given the millions upon millions of passengers, and passenger miles, flown in a given year, the terror threat is so minimal as to be non-existent.
Still, tonights news, I’d bet, will emphasize the Ukraine attempted high-jack, and attach it to the Olympics at Sochi. It’s a pretty safe bet….
COMMENTS (note also the “responses” section at the end of this post for possibly other comments):
from John B: Yes, the hype about the big Olympic “stars” gets over done. The chasm between the amateur and professional sports ( basketball, hockey) competitors and the truly amateurs (track events, biathlon) seems peculiar. Although I have watched Olympic coverage in the past, I have really enjoyed two things, the pageantry of the opening and closing ceremonies, and of course, rooting for the Norwegians and other Nordic athletes . . . . check out the cross country skiing.
from Lydia H: Very interesting, Dick!
I saw a bit of the snowboarding…pretty amazing actually…tho it’s the ice skating that I follow in Winter Olympics. (Don’t watch the big ceremony since it’s just too Vegas!)
https://thoughtstowardsabetterworld.org/wp-content/uploads/2022/04/thoughts-300x138-1.jpg 0 0 dickbernard https://thoughtstowardsabetterworld.org/wp-content/uploads/2022/04/thoughts-300x138-1.jpg dickbernard2014-02-08 11:29:182014-02-08 11:29:18#841 – Dick Bernard: Reflecting on "Going for the Gold" in Sochi
2 replies