UPDATE 7:00 p.m. February 22: Dan’s funeral was very fitting of his rich life. Here is the program for the funeral, on page four you’ll find Dan’s biography: Dan Moriarty Program 001. Here is a Facebook album of some photos taken at the Funeral today.
This morning I plan to attend the celebration of the life of Dan Moriarty at his funeral at St. Thomas Aquinas Catholic Church in St. Paul Park MN. Judging from the tributes in his published obituary, Dan’s life is one to celebrate. (I’ve just reread those tributes. They’re very worthy your time, particularly if you’re feeling down, today, for any reason.)
I first met Dan when I joined the staff of Minnesota Education Association (MEA) in 1972. Doing the math, he was then about 48 years old.
Next Tuesday, my oldest son is 49. How time does fly.
Back in 1972, Dan was a seasoned MEA staff person – one of the very few – and I was the greenest of greenhorns, 16 years his junior. When he died I was still 16 years his junior…the age gap doesn’t change…until one dies. Age is all relative. We’re all on a trip, with the same ultimate destination. Hopefully, we make the best of the journey and, as I once heard a minister eulogize another teacher who had died much too young, in a car accident enroute to Boys Nation: that we “live before we die, and die before we are finished….”

Dan surely did “live before he died”.
I’m now long retired from MEA, and what remains from my long career with MEA is a single box in our garage.
After learning of Dan’s death, I took down that box to see if there was anything that might mention Dan’s name, and much to my surprise I came across a 10 page publication of his, published in 1993, after he’d gotten involved in substitute teaching in several east metropolitan area school districts. Below is a photo of the cover of the booklet. Here is the booklet in its entirety: Dan Moriarty “Subbing”002. Many who knew Dan, including the former recipients of his “Grandpa stories”, will doubtless recognize Dan in his advice to other aspiring substitute (and, indeed, regular) teachers. At the top of page 5: “Grandma’s Law: If you don’t eat your spinach, you don’t get your dessert.” (Somewhere I have a copy of his Grandpa Stories too, though for the moment it remains in hiding.)
(click to enlarge) 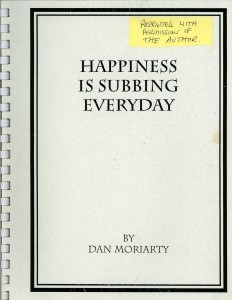 Many of the tributes to Dan, readable in his obituary, came from students who knew him only as an occasional “substitute teacher” in South Washington County, S. St. Paul, Hastings or Inver Grove Heights.
Obviously, he was the very essence of teacher, in the most positive sense of the word. A son of Enderlin, ND, he made a difference.
We who were colleagues of his on the staff of the state teacher’s union also have many fond feelings about him, still retained many years after he left MEA staff ca mid-1980s. Here are 17 former colleagues, speaking about Dan: Dan Moriarty
I can’t say I knew Dan really well. On the other hand, I knew him plenty well enough to know that he was comfortable in his own skin, and he set out to be a contributor to whatever part of society he happened to be part of. This ranged from WWII service as a Marine, to working for his Church, to advocating for teachers, to teaching, to family history, his family, and on, and on, and on.
Every one of us, in one way or another, have made, and are making, our own contributions to the world in which we live. If we’re lucky, in somebody’s cardboard box, somewhere, lies a positive memory or two of us, probably one we think was no big deal.
Maybe our emotional mood right now is such that we don’t think we made a difference.
Trust me, everyone has, and will….
Dan would probably be surprised at the attention he’s gotten these last few days, and shrug all the compliments off.
But I think he’d smile, too.
He was just out to do his best.
And he did.
The world is a better place because he was with us.
Farewell, Dan.
And to the rest of us: if there’s someone out there who made a difference in your life, and is still living, now is a good time to say, as Dan would, a gentle “thank you”.
Related: The Bottom Line of Teaching, here.