Other Posts in this series, as follows:
Feb 11, 2013: “Sykes High, oh Sykes High School”
May 4 (the main article): Thoughts on Sykeston High School at its Centennial
May 9 A 1957 Social Studies Test
June 28 Snapshots in History of Sykeston
June 29 Sports in 1950s small towns in North Dakota
July 3: Remembering Don Koller and the Lone Ranger
*
Today we saw 8th grade Grandson, Ryan, off as three busloads of kids left for a week in Washington, D.C. A couple of months ago, two other grandsons, grade 7, were on a similar trip.
I thought, as I watched the kids board the bus this morning, about my own graduation from 8th grade (1954, Ross ND). I would have had absolutely zero framework of reference of even the possibility of ever going to Washington D.C. then, though I do recall seeing President Eisenhower on motorcade in Minot ND about that time. He was probably there concerning the soon-to-be Minot Air Force Base.
But today seems to be a good time to recall Sykeston, as the tiny central ND town prepares to celebrate its High School Building Centennial in early July. Here is what I have written thus far about that school.
We lived in Sykeston twice. In this piece, I choose the years 1946-51 as a personal focus, grades 1-5 for me.
Below is Sykeston from the perspective of the United States Geological Service in 1951; and a photo of our family in June, 1948, shortly after youngest sibling John was born. I’m the kid on the right, 8 years old. A couple of days before John was born, was my First Communion at St. Elizabeth’s down the street.
Here is Google Maps satellite perspective of Sykeston in the present era.
(click on photos to enlarge) 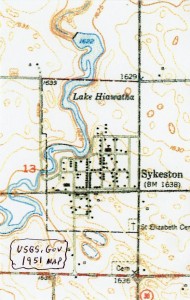 Sykeston from a USGS topographic map, 1951. (www.usgs.gov for this and other maps.) 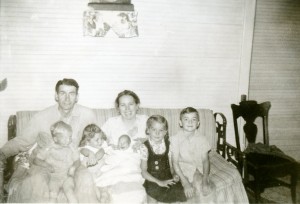 Sykeston in the 1940s hardly varied from about 225 residents. Its highest population never exceeded about 275 (1920), and since 1950 the population has decreased.
Beginning in perhaps the summer of 1947, we lived in what the family always called “the North House”. On the map, it is the northernmost dot in Sykeston. Its recent past was as a granary somewhere out in the countryside. Even from a 7 year olds perspective, it was a major rehab effort. 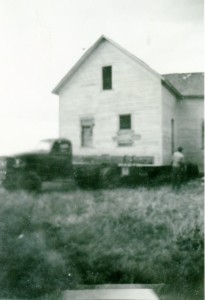 The “North House” comes to Sykeston from the country in 1947 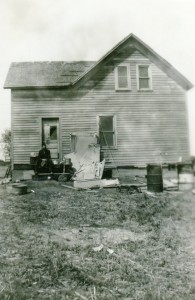 A tired Henry Bernard,visible at left, takes a break while rehabbing the North House in 1947. Photo is of the east exposure of the house.

I made a few nickels hauling buckets of grain from the North House to O. J. Lundby’s elevator. I’m guessing it was more a reward for effort, than of value to the elevator, but nonetheless those Buffalo/Indianhead nickels burned a hole in my youthful pocket.
Of course, there was an outhouse, initially. When city water made it from the water tower to our place, a tiny bathroom was built in, and I vividly remember the time a dead minnow made a trip from Lake Hiawatha to our bathtub. At that time, I believe, the town drinking water came from a town pump by Merck Grocery, “downtown”, a few blocks away.
For some reason, I have vivid memories of two airplane events when we lived at the North House.
Townsman Jesse Evans owned a plane, and had something of a makeshift runway in the field north of our house. One time he overshot the runway and ran into Lake Hiawatha. Best I know he survived, and the plane as well. It sticks in my mind.
Much more vivid, because I actually saw it approach and pass over the town, was the day when a huge aircraft with six propeller engines came over Sykeston, at a very low elevation, from the north.
There was no notice of this event. The plane came and it disappeared.
Piecing together this mystery, I’ve concluded that I (and perhaps others) likely witnessed a B-36 bomber on some kind of training mission from South Dakota’s Ellsworth Air Force base, sometime after 1947. Here’s an article and some video about the B-36 and here’s an article about Ellsworth AFB and the B36.
For kids, the world is the bounds of their neighborhood, and for we kids in Sykeston, the streets of the town were our neighborhood – our range. Occasionally there were forays out to the Dam north of town; as well as to the town dump, repository of treasures a bit to the east of the town. But mostly our adventures (and misadventures) were on those city streets, and at Lake Hiawatha, a unique part of Sykeston, an amenity shared by few ND communities. 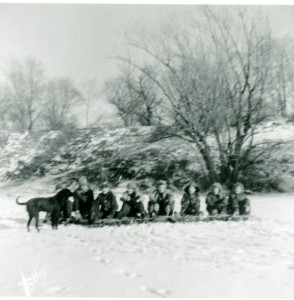 Eight kids and dog on Lake Hiawatha in winter.

So, what do I remember? This is an abbreviated list. Every reader in Sykeston, particularly my contemporaries back then, can identify many more memories. Everyone, anywhere, would have their own similar memories about their own cohort, their own town.
The local “gang” – I don’t recall there was any competing gang – were basically the same age, and ran the same routes. Some names that come to mind: Tubby Sondag, Jerry Kutz, Bobbie(?) Kunz, Don Koller, Johnny and Jim (“bull” and “little bull”) Merck; Johnny Hammes; the Woiwode boys; Dougie Wild; Wagners; John and Jim Eaton. Arlo Neumiller and Bob Miller may have been around the bunch, too, but this bunch was basically the Catholics, from St. Elizabeths School, and religious denomination made a difference in those days.
My apologies to any kids I inadvertently missed in this list.
About the time we moved to the North House (1947), the next door neighbors were the depot agent, the Neustel’s, and their kids Pepper and McGee. They moved away from Sykeston not long after we moved into our house one vacant lot away.
The locus of the action for the Sykeston “gang” seemed to run between Kutz’s pasture on the east end (the dump, further east, on really adventuresome days) to Lake Hiawatha on the west. Of course, the “lake” was Pipestem Creek, which to my knowledge was initially dammed by the town founder Richard Sykes, part of whose property was north of what we kids knew as the swimming hole (I almost drowned at that swimming hole, and as a result have never learned how to swim – that is a whole other story. That hasn’t stopped me from occasional dumb things around water, like twice canoeing in the Quetico Wilderness, but the incident at the swimming beach across the walking bridge from town was terrifying and life-changing for a perhaps 9 year old.)
Compared with today, Sykeston’s Main Street and the side streets surrounding were pretty busy in the 1940s. Here are some memories, hopefully reasonably accurate:
Merck’s Grocery was a town institution and the place where I made my first small purchases of goods in the 1940s: I seem to remember Popsicles and Sunkist orange pop, for instance. The town pump, was near the store, between the store and Merck’s house, and I hauled drinking water more than once from that pump to the North House. I don’t recall city drinking water in Sykeston at that time. I might be wrong on that.
The “fire department” I recall was still the old firehouse hand cart with coiled hose pulled by men by hand, or at least I recall seeing a practice run by some men from the firehall by the water tower. Maybe there was a town fire truck. I don’t recall it.
Mr. Spitzer, I think, took a large wheeled push cart down to the depot to pick up the mail bags when the west bound train came through in the morning.
People gathered at the post office, kibbitzing, waiting for the mail to be distributed. It was the daily predictable weekday event in Sykeston.
There was the Wagner Hardware, the Blacksmith Shop, Daniels Barber Shop (the first barber shop hair cut I remember), a still working cream station – maybe two of them, a Red Owl, the Locker Plant, the saloon of course, with roller skating upstairs every now and then, a gas station with lots of inner tubes – one of which accompanied me on my near date with death at Lake Hiawatha, the baseball diamond, the Lutheran church which seemed to be off limits to we Catholics.
I contributed to the Sykeston economy and Wagners by buying – then losing – marbles to the more expert kids. Once I recall being invited to the attic of the Sondag house at the south end of our block. Up there were buckets and buckets of marbles, sorted by types. It was like I’d seen marble heaven.
Mr. Kramer sold insurance downtown I believe, and a dentist, Doc Dummer, and Wild’s Restaurant, and the two gas stations on the highway, one at each entrance point to Sykeston.
And Lundby’s elevator – O. J. was the rich man in town (or so I thought).
Deserving many stories all by itself, perhaps the main social center of the town, was the St. Elizabeths Hall – to me it was the Town Hall: basketball, school plays, the movies, Bingo, dances. A single sentence doesn’t suffice. Together, those who gathered in its space could write a very interesting book….
I probably could go on with more and more memories, maybe embellished by imperfect memory after over 60 years away from them.
But some memories do stick, as we all know, good and bad, and I hope you enjoyed reading this.
(click to enlarge) 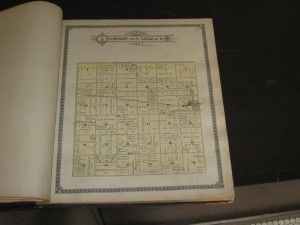 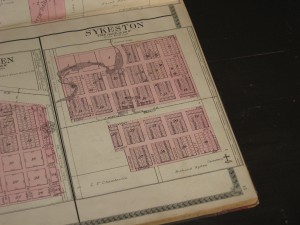 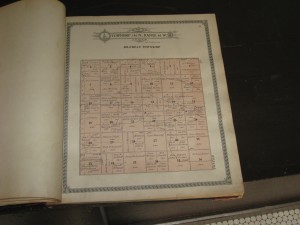 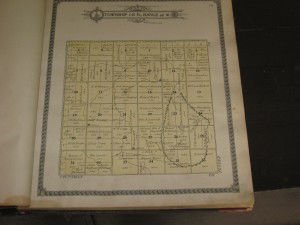 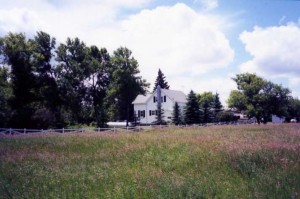 The Sykeston North House, June, 2000, the east exposure. Some years later it burned to the ground.