Note to reader:
Note: There are six other posts about Sykeston:
There are several other post I have done about Sykeston:
May 4 (the main article): Thoughts on Sykeston High School at its Centennial
May 9 A 1957 Social Studies Test
June 12 Remembering Sykeston in late 1940s
June 28 Snapshots in History of Sykeston
June 29 Sports in 1950s small towns in North Dakota
July 3: Remembering Don Koller and the Lone Ranger
This is also one of a series of posts spawned by recollections of attendance at Valley City (ND) State Teachers College 1958-61. This and the other items are (or will be) permanently accessible at January 2, 2013.
I was a tiny town kid. Sykeston High School, class of ’58, included eight of us. A ninth had dropped out mid-year to join the Air Force. (The subject heading for this blog was the School Song, written in 1942 by two students. Sykeston School Song002) The previous year I had attended Antelope Consolidated, a country Grades 1-12 school near Mooreton, and the Senior Class numbered two: a valedictorian and salutatorian. The smallness didn’t seem to hold us back: long-time U.S. Senator Byron Dorgan was fond of recalling that he graduated 5th in his class of 9 at Regent, in far southwest North Dakota.
Most of us at VCSTC were from tiny towns. In contemporary terms, even Valley City (2010 population 6585) would be considered nothing more than a town; John Hammer, a colleague freshman in 1958 from the surrounding Barnes County (2010 population: 11,066) said that in his high school times, aside from Valley City itself, there were 16 school districts with high schools in Barnes County – perhaps one high school for every 300 total people.
Sykeston was probably pretty typical of those hamlets many of we students called “home”. In 2008, after my 50th high school reunion (held coincident with Sykestons 125th anniversary), I managed to cobble together the data about that high schools graduating classes from the first, in 1917. You can learn a lot about ND from that graph including the fact that my high school closed in 2005, leaving behind only the stately building from 1913.
(click to enlarge) 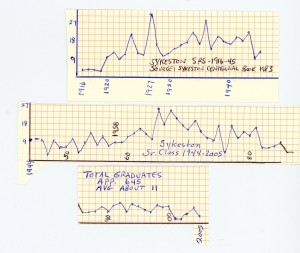 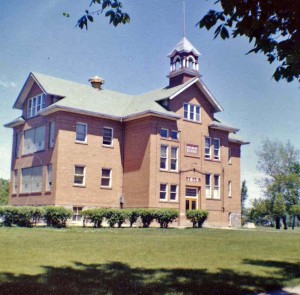 Valley City State Teachers College, then, was big-time for me, a country kid. It was founded in 1890, and was part of a State College system supervised by a Board. Here is the 1960 Board: ND State College Bd 1960001 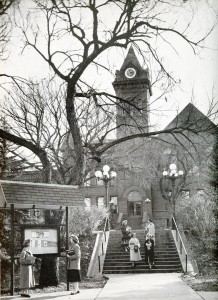 STC’s sports teams, then, were excellent, and the 1959 annual, in the Basketball section, notes the competition. The ND State Colleges played that year were: Wahpeton, Ellendale, Bottineau, Mayville, Minot, Bismarck & Dickinson. Some of these were Junior Colleges. Private Jamestown College was next-door arch-rival. VCSTC also played University of Manitoba, and S.D. schools Huron and Aberdeen.
Here is the current roster of North Dakota State Colleges. Ellendale long ago “bit the dust”. Devils Lake and Williston may or may not have existed in 1958. I’m not sure.
For whatever reason, I seem to have developed early an interest in what “school” in North Dakota meant, even back in college and early post-college years.
In June, 1961, for some reason I did a little research piece about the history of North Dakota Public Schools and published it in the Viking News which I then edited. I can remember writing the piece, but not why I chose to do it, though I don’t think it was an assignment. You can read it here: VCSTC ND Educ Jul 5 1961001. On rereading it, I think I was basically quite accurate. I probably used the college library sources for research.
In February, 1965, during one of those vaunted three-day blizzards in western North Dakota, I whiled away my time in our tiny apartment doing some more research on Changes in the Small Schools of North Dakota. I used the simplest of resources: the North Dakota School Directories and census data. Blizzard over, for no particular reason, I submitted the unpolished piece to the North Dakota Education Association which, much to my surprise, printed it in the April, 1965 issue: Changes in ND Small Schs001.
Later that month, an editorial about the article appeared in the Grand Forks (ND) Herald – a minor brush with fame.
It would be interesting to see someone update that 1965 blizzard-bound “research”.
https://thoughtstowardsabetterworld.org/wp-content/uploads/2022/04/thoughts-300x138-1.jpg 0 0 dickbernard https://thoughtstowardsabetterworld.org/wp-content/uploads/2022/04/thoughts-300x138-1.jpg dickbernard2013-02-11 21:07:032013-02-11 21:07:03#687 – Dick Bernard: "Sykes High, oh Sykes High School of Dreams Come True…."