One week from today, Wednesday, March 12, a fundraiser to celebrate the power of immigrant stories will be held at Target Field, Minneapolis. You are encouraged to attend, and make others aware of this important event as well. All details, including bios of the speakers, are here.
Your RSVP is requested.
Ours is a nation of immigrants: this is such an obvious fact that it often escapes notice. My own American roots are France (via Quebec) and Germany.
I was reminded of the extent of the immigrant population a few months ago. In the summer of 2013, I had reason to access the 1940 census of the tiny town of Sykeston ND, the place from which I graduated from high school in 1958. In that tiny town (pop. 274, in 2010, 117) in 1940, of the 161 adults 16 listed other states as birthplaces, and 11 were born in countries other than the U.S.
As late as 1940, one of six adults in the town were not native, even, to the state of North Dakota. I wrote a bit about this here, including the worksheet from the actual census here: Sykeston ND 1940 CensusRev, see page 3.
Tiny Sykeston was just one town, then.
Every reader could tell their own story: family members, ancestors, neighbors, friends….
We are a nation of immigrants.
Which leads again to Wednesday, March 12, 2014, 6-9 p.m. at Target Field in Minneapolis MN.
On that day, three immigrants to the U.S. will introduce GreenCardVoices.
All projects have their stories, and GreenCardVoices is no different. This new project already has a history.
Some years ago Laura Danielson, chair of the Immigration Department at Fredrikson and Byron, Minneapolis, decided that the stories of immigrants she knew were so interesting that they deserved retelling, and a coffee table book, Green Card Stories, was published in January, 2012.
The book did well, but over the subsequent months, Laura and others engaged with the book and its stories came to a conclusion: print books, however attractive, have their limits, particularly in these days of exploding technological capabilities to share information far beyond one home or one office coffee table, and Green Card Voices was born just a few months ago.
The project is described here, including a video (this is a video project, after all!).
The dream of the project is to video-document first generation immigrants with more than five years in the U.S. from all of the world’s countries (196 in all). These stories can then be shared broadly in various ways. It’s a very ambitious undertaking, but doable with adequate funding support from persons like ourselves.
By happenstance, I was in attendance at one of GreenCardVoices first public presentations at Hosmer Library in south Minneapolis November 2, 2013. Theirs was a fascinating program, and I am certain the program at Target Field next Wednesday will be fascinating as well. (Roy Woodstrom, librarian at Hosmer Library, is a child of an immigrant – his mother is German). The person who invited me to the presentation is a child of Swedish immigrants. And on we go.
Shepherding the project is Dr. Tea Rozman-Clark, native of Slovenia. Her bio is here. 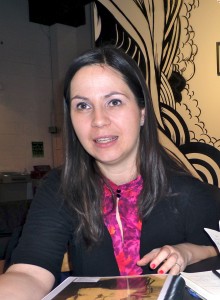