PRE-NOTE: The Nobel Peace Prize Forum continues Saturday and Sunday March 8 and 9. Details here. I highly recommend the Forum, an annual tradition at Augsburg College. My thoughts on Day One (Dalai Lama) here.
Prime takeaway: Peace is a process, one person, one action at a time, which has immense cumulative effects. The guests know this, and convey this in one way or another in their talks. Everyone in every power pyramid, regardless of how seemingly insignificant they might be portrayed, or feel, has an equal stake in making our world a better place.
This morning I was walking towards Augsburg College with Tom Morgan. We parted company at Oren Hall, and he suggested that I take a look at the Peace Quilt Labyrinth there, an exhibit arranged by Janet Bear McTavish.
Thus began a usual great day at the Nobel Peace Prize Forum, now in its 26th year, bringing the community together to focus on the issue of Peace.
The basic message of the labyrinth, a series of 44 beautiful quilts, was the shared message of all faiths: what is often called the “Golden Rule”. Within the exhibit was this handout: Golden Rule – McTavish001
Janet (her maiden name, Bear, is actually German, she said), was completing setting up the labyrinth, but was most gracious, spending some time with me. Here are some photos from this must-see exhibit at Oren Center at Augsburg College, Minneapolis.
(click to enlarge) 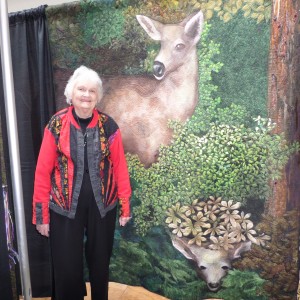 Janet Bear McTavish with one of her quilts in the Labyrinth 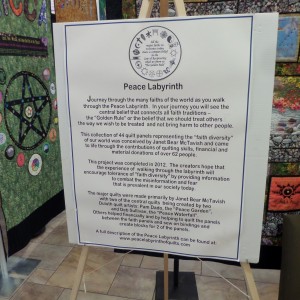 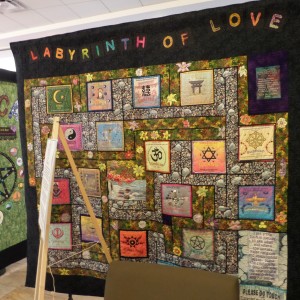 My personal choice this first day was the Youth Festival, long a part of the Forum, open to students, this years focus grades 4-12. This years Festival co-sponsor was Youthrive. They did an expert job, including as MCs.
(The Youth Festival is not on the public program and by invitation to schools. I know of it from several years active involvement in it.)
Several hundred students were inspired by dynamic Nobel Laureate Leymah Gbowee (Liberia, 2011 Nobel Peace Prize); and Dr. Deane Marchbein, American President of Medecins Sans Frontieres (Doctors Without Borders, Nobel Peace Prize 1999). Ms Gbowee is keynote speaker at the Forum on Sunday afternoon; Dr. Marchbein is keynote speaker on Saturday morning. Videos of their talks will be on-line at the Augsburg Peace Prize website soon.)
I have become accustomed to pleasant surprises at the Nobel Forums.
This year, along with the Quilts, another highlight occurred when Leymah Gbowee asked that the houselights be turned off; then asked the kids in the bleachers to turn on their cell phone lights. Here was the result: 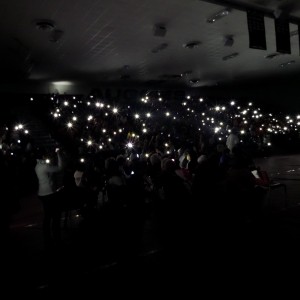 The message of Ms Gbowee to the kids was simple: “you, the young people, are the light of the world”; a simple, powerful encouragement to everyone that they, individually, make all the difference.
Both Dr. Marchbein and Leymah Gbowee connected with their young audience, and one can imagine that lots of these kids and their teachers and parents went home inspired to light up their own worlds in a positive way, as we all can light up our world. (A few more photos at the end of this post.)
After the Youth Festival, I attended one of the workshops of Law and Business Day, and also the final talk of the afternoon. Both were worthwhile.
Looking for something worthwhile to do this weekend?
It’s not too late to attend and participate in this years Peace Prize Forum at Augsburg College. You won’t regret it.
Gallery. Click on any to enlarge. 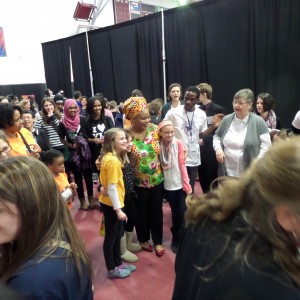 Leymah Gbowee poses with kids after her talk. 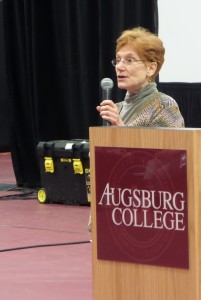 Dr. Deane Marchbein, Doctors Without Borders, shared her experiences with the student audience 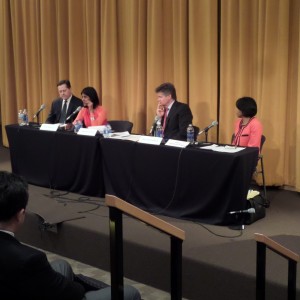 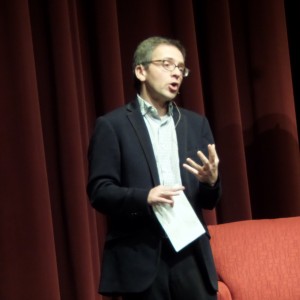 Ira Bremmer President and Founder of Eurasia Group gave his views on international developments in Eurasia. 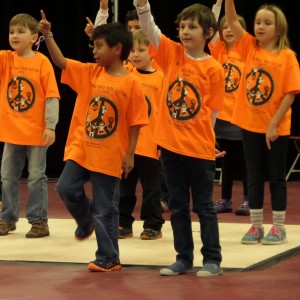 The First Graders from Burroughs School worked their annual magic. 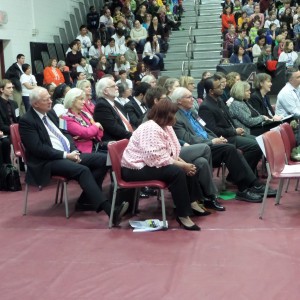 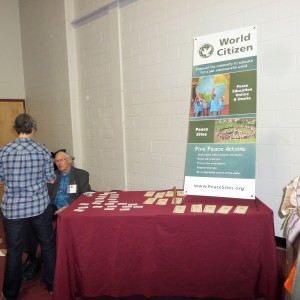 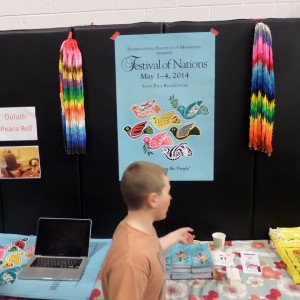 The Festival of Nations, a long-standing program of the International Institute of Minnesota, was invited to publicize its annual Festival in St. Paul, May 1-4, 2014. Its 2014 theme: “Peace Among the People”.