I just spent four days and nearly 900 miles revisiting places of my roots in North Dakota. It seemed like a long trip, and it was, but then, last night, I watched the first part of the Ken Burns program on the Lewis and Clark Expedition of 1803-05.
Piece of cake.
This trip happened when I learned that tiny Sykeston High School, where I graduated in 1958, and where my Dad taught for ten years, and my mother for four, was having its Centennial, I decided I wanted to be there. I wrote a blog post about Sykeston on my birthday, May 4, and this morphed into six others, and now this one, eighth in the series. 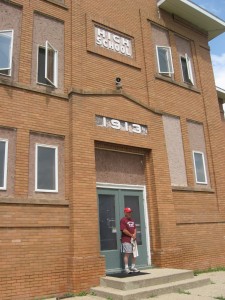 Associated, was another history centered blog post about Valley City State Teachers College, which I attended, and graduated from, in 1961. This led to another blog post on January 2, 2013, which has itself had many followup posts. 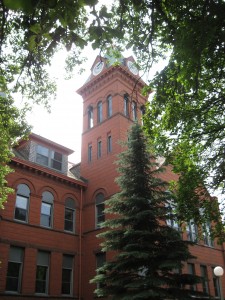 So, there’s little reason to write more. Mostly, this post consists of photographs with captions I took at Valley City on July 5, and at Sykeston on July 6, 2013.
2013 Sykeston here *. (See note at end of this post.)
Valley City here.
There is an additional Facebook album from another larger Sykeston reunion in the summer of 2008, here.
And readers familiar with either place can add to with additional photos or comments at their leisure.
Sykeston is 400 miles one way from home in suburban St. Paul; in between, some 310 miles from home, is Valley City. So it was not “out of the way” to stop at one enroute to the other. Between Sykeston and Valley City is Jamestown – always “Jimtown” to my Grandpa.
When I began college in 1958, the first ten-mile section of Interstate 94 was being constructed in North Dakota, between Valley City and Jamestown. It was probably one of the first true pieces of Interstate in the United States. I remember it was said to cost “a million dollars a mile”. So it makes sense, with this piece of history, to note that endless ribbon of concrete called I-94 in North Dakota: 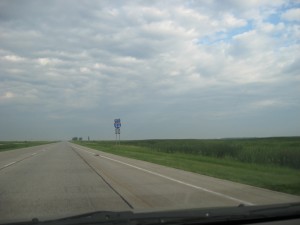 This trip I drove 550 miles on I-94, lickedy-split. Kids today cannot imagine what it was like in the years before the Freeways, even on U.S. highways, all of which went through the middle of every town, large and small. It was not the good old days: no air-conditioning in the car, no cruise control, no seat belts….
At Jamestown, in 1959, along I-94 was built what has become something of an iconic tourist attraction, “The World’s Largest Buffalo”. That buffalo was constructed during the time I was in college, and I decided I needed to stop there after leaving Sykeston on July 6. The buffalo is, the plaque says, 46 feet long, 26 feet high, 14 feet wide and it weighs 60 tons. More about the buffalo here.
It’s not going anywhere. It has aged well. 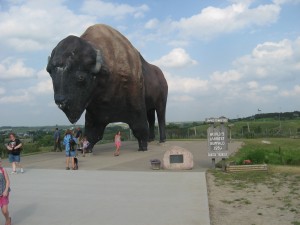 We had been at that very spot in 1960, and here’s photo “evidence” (I wasn’t in this particular photo, and probably wasn’t photographer either, but all of my siblings and my Mom are in this photo): 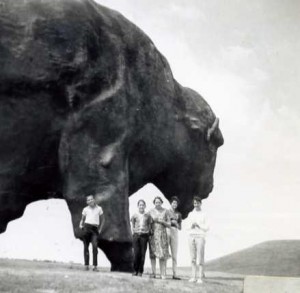 Yes, it is just your basic tourist attraction, but impressive nonetheless.
Completing the trip, on July 7, my Uncle and I were driving out to the family “Century Farm” 10 miles from LaMoure and I asked him to stop at the corner of Highway 13 and their county road. There, as they have been for years, was a nest of wild prairies roses that somehow or other have escaped being plowed under for all these years.
The wild prairie rose is North Dakota’s state flower.
A photo of this flower is an appropriate way to end this post. 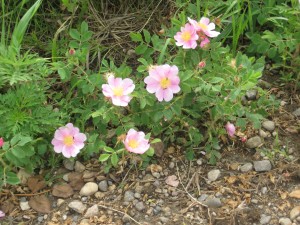