Today’s Minneapolis Star Tribune has a good quiz to test your knowledge of the U.S. The column, including link to the test, is here. 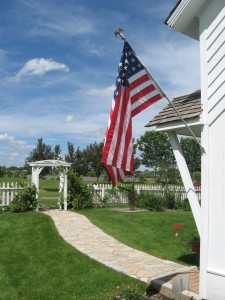 Today, July 4, is supposed to be a simple kind of day in the U.S. My daughter described it well: “grillin’ and chillin'”.
This particular July 4 is a tad more complicated, if one wants to pay attention to complexity. Edward Snowden is a man sort-of without a country in the Moscow airport; the President of Bolivia was detained somewhere since his plane was suspected of harboring Snowden; and then there is something going on in Egypt, whether bad or good depends on the interpretation. A good long summary of Egypt is here for anyone who wishes.
And then there is a matter of our own less than pristine history. A surprising post I saw yesterday about a monument to a major American mistake in one war came in yesterday. The writer is not a “usual suspect” for this kind of essay. You can read A Memorial to a Mistake here.
We don’t like to own mistakes….
There is tradition for us, today. Ordinarily the theme is some variation of War, down to the Fireworks tonight “the Bombs Bursting in Air….”.
A pretty typical musical version would be this song sent to me by a friend not long ago. It is very patriotic. Good tune. But I left this comment “Such an angry self-righteous song. I’m an honorably discharged Army vet from a family full of military vets. My uncle went down on the Arizona at Pearl Harbor. Saddam Hussein and bin Laden were our useful “friends” years before 9-11-01…how soon we forget. I’m lifelong U.S. and I love this country; but we are part of the world, not above it or in dominion over it.”
I’ll see if my comment is “approved”. I posted it July 2, 2013 at 8:30 p.m. CDT.
I’m a patriotic guy, but my patriotism is canted somewhat differently than the singers and fans of that song.
Just for consideration, I’d like to propose looking at some alternatives to a war-based celebration of our Independence.
All you need to do is to take a look, and make up your own mind:
1. I’m proud to be a Founding Member of the U.S. Peace Memorial Foundation.
The Founder of this foundation, Dr. Michael Knox, is a friend of mine, and he noticed some years ago on a visit to Washington D.C. that there were no end to memorials to War, but reminders about Peace were in short supply.
Michael and I do not agree in all particulars about his project, but we are totally on the same page about celebrating Peace at least similar to our obsession with War.
Take a look, and consider becoming a member of the Foundation, and letting others know about this fledgling and important group.
2. A photographer and journalist I know, John Noltner, is continuing a nationwide project for which he has already achieved significant success.

I asked John for something I might add to this post. Here are John’s words about his project:
“What does peace mean to you?
It’s a question I have been asking people for the past four years for a
collection of portraits and personal stories called A Peace of My Mind.
The goal is to find the humanity in every person…even our adversaries.
Perhaps through hearing the stories of some who are like us, and others
who are quite different, we will be able to see past the rhetoric that
confounds our national dialogue and develop a more compassionate way of
engaging with the world…in our own families, our neighborhoods, and the
international community.
To hear some of the stories of people working toward peace, follow this link.”
Invest some time in learning about this project, and consider contributing to its success.
3. The Snowden affair reminds me of someone I’d never heard of till a couple of years ago, Garry Davis, who was a U.S. bomber flight crew in World War II. And after his brother was killed aboard a Destroyer off Italy, his bomber group bombed one of Germany’s large cities.
Davis could not get out of his mind the sense that one senseless killing – his brothers death in War – simply begat another – his bombing Germans.
He knew there were innocent victims down there below him, people like himself, and like others he knew. After the War he decided to renounce his U.S. citizenship and became a Citizen of a World, with tragi-comic results. He became a citizen of everywhere, but was accepted as a citizen nowhere.
He had idealistic intentions. His only crime was wishing to renounce war between nations as a solution to problems, and for a time he had a huge following of people equally sick of war, having just experienced World War II.
People working together to solve problems became Davis’ mantra.
His is a fascinating story. He is still living, but at 92 frail. Indeed, a movie of his life is in preparation – I’ve seen a long preview of it. You can watch the trailer here.
Watch the trailer – it’s 7 minutes – and consider contributing to the completion of this very important film of witness to peace. Here’s the link to do so.
4. Peacestock. Finally, for interested persons in the Twin Cities area who are interested in the policy topic of Peace, consider Peacestock on July 13, in rural Wisconsin not far from Red Wing MN. Here’s the link for that program. I’m a long-time member of Veterans for Peace.
https://thoughtstowardsabetterworld.org/wp-content/uploads/2022/04/thoughts-300x138-1.jpg 0 0 dickbernard https://thoughtstowardsabetterworld.org/wp-content/uploads/2022/04/thoughts-300x138-1.jpg dickbernard2013-07-04 12:17:472013-07-04 12:17:47#744 – Dick Bernard: Some Proposals for this Fourth of July