Today is one of those Birth Days in my family circle.
It is unusual in that there are three today: Oldest son, Tom; spouse, Cathy; daughter-in-law Robin all begin a new year in their respective histories. Tom was born less than three weeks after the Beatles appeared on the Ed Sullivan ‘shew’, February 9, 1964. So here, thanks to YouTube, is their appearance on that show. (I wrote a comment.)
Happy birthday to all. (You can see a brief cameo appearance of Tom in a Denver television spot about his wife, Jennifers, popular eatery, Simply Sloppy Joe’s here. More here.)
To this list of Feb 26ers, I could add my grandfather Bernard, who, were he alive today would be 140 (he lived to a ripe old age of 85 before passing on in 1957. I was 17 when he died, and I have lots of memories of him.) Born in rural Quebec in 1872, he grew up in a different world than we live in. His to-be mother-in-law, Clotilde Blondeau, later Collette, had come to what is now suburban Minneapolis (Dayton MN) as a young girl in the early 1850s, long before there were roads and railroads, and before Minnesota became a state. Blondeau’s were here nearly a decade before the Civil War and the beginning of Abraham Lincoln’s Presidency.
Time passes on, and the best we can do is the best we can do.
Birthdays are one of the two things we have in common. The other, death, comes unannounced. There is a certain ‘menu’ selected: sudden, lingering, on and on. I’m old enough to remember lots of these, some very recent; most of those recent deaths younger than I am; a tragic one learned about just this week.) Every one reminds us of good times and bad; relationships fine or complicated…death is really for the living, in the end. That’s what obituaries and funerals and memorial services are all about.
Recently I had a pleasant and unexpected reunion with a classmate from high school days, Duane Zwinger of Carrington, ND. He popped in at my coffee place unannounced and we had a couple of great visits. His daughter and family live, it turned out, two short blocks from my birthday-girl daughter-in-law Robin, son-in-law David and grandson Ben. (Their proximity is a reminder that today the whole world is our ‘neighborhood’.) 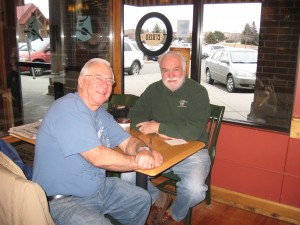 He and I had reconnected in 2008, on the occasion of the anniversary of my 50th year out of high school in Sykeston ND. He’s a year younger, and we re-met at the towns all-school reunion. We’d last seen each other in college days. I hauled out the little high school yearbook, and we read, and laughed about, the prophecy for my class Sykeston Sr Hist 1958001(there were nine graduating seniors; a tenth left school and joined the Air Force mid-year. Two have died.)
At that town reunion, several of we family members slept in one of the top floor classrooms of the no longer used Sykeston High School. It was a school several of us had attended, and my Dad was Superintendent and Mom taught elementary there. It was a nostalgia time.
The last morning, I wandered the halls of the old place, and decided to take photos of the senior class photos still hanging on the wall of the school. This was before I knew there was such a thing as Facebook, and probably before Facebook had perfected the technology of on-line photo albums.
But that was then. A couple of days ago I entered all of those class pictures – they began in 1944; the school began in 1913 – on Facebook.
Here they are, over 60 years worth, of people born from about 1926 to 1957. (If you’re unfamiliar with Facebook albums, you can click on any photo, it will be enlarged and you can do a ‘slide show’ on screen. Note arrow at right side of photo, and click on it.)
Happy Birthday all!
And here’s the Sykeston School Song! Sykeston School Song002
Best wishes.
https://thoughtstowardsabetterworld.org/wp-content/uploads/2022/04/thoughts-300x138-1.jpg 0 0 dickbernard https://thoughtstowardsabetterworld.org/wp-content/uploads/2022/04/thoughts-300x138-1.jpg dickbernard2012-02-26 05:00:152012-02-26 05:00:15#524 – Dick Bernard: Birthdays and Memories.