Monday morning I decided to go over to the sites of George Floyd and Gandhi Mahal, just to see the area up to date.  A picture at 38th and Chicago is in the Monday post.  It ws quiet, an ordinary day in the working class neighborhood.  There were a few of us there, the streets remain blocked for a block on all sides, open only to people who live in nearby houses.

I also stopped by Gandhi Mahal, the restaurant destroyed by fire that week.  No change in status.  This time I took photos of the post office at the end of Gandhi Mahal block, which was also destroyed in the turmoil.  Here is a snapshot from the front of the building. 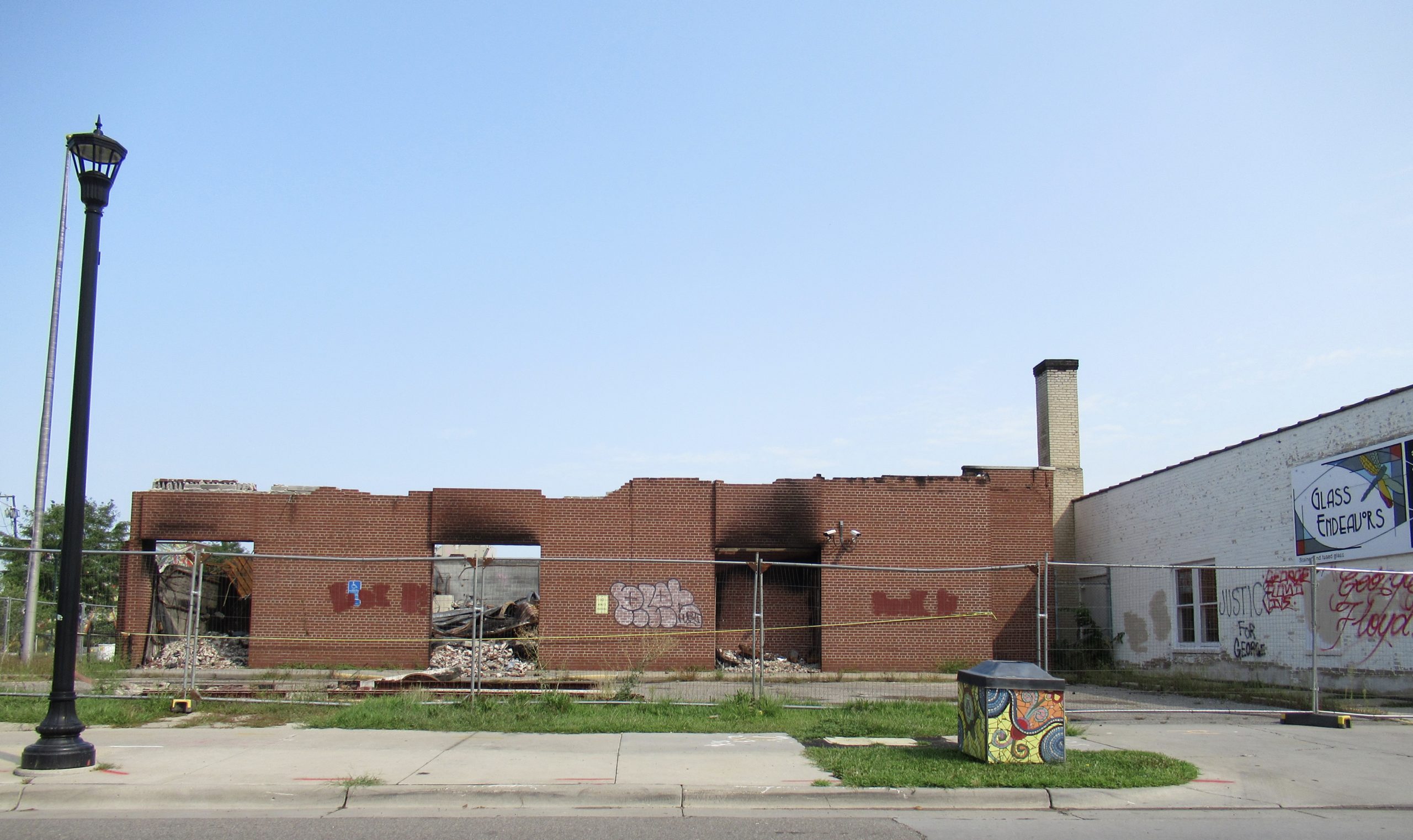 A few times I’d stood in line at that post office, part of the neighborhood.  It was my cousins post office.  Now it no longer exists, until it is rebuilt, IF it is to be rebuilt.  More about this and other post offices later this week.

To my knowledge, no one has yet been addressed in the fire-bombing of the postoffice, or my friends restaurant a half-block away.  They both served their surrounding community, as did most of the damaged or destroyed buildings in the area.  Odds are the malicious vandals were not part of that community.  We won’t know who the perpetrators were perhaps for months or years or possibly ever.

It happened that Monday was also the day that Louis DeJoy, postmaster general, appeared before a Congressional Committee.   I had watched for awhile.  All details, including escape and evasion of actually answering questions will be filled in in following days.  The drill at hearings, I find, is ‘escape and evasion’ on the one hand; and building a record on the other.  The meat and potatoes come later; following the theater of the public hearing itself.

Monday night I planned to watch at least part of the proceedings, but I didn’t last very long.  There have already been over four years of Trumps constant grievances, echoed by his supporters, who have walled themselves in on the dark side, waiting for Armageddon to give them paradise, while the rest of us burn in hell.  (I’ve been to Armageddon.  It is, indeed, a place.  You can look it up.)

I’m glad I made my return visit to south Minneapolis Monday morning.  It’s the ninth or tenth time I’ve been over there since right after George Floyd’s death at the corner of 38th and Chicago.

Life on the surrounding streets is normal; the monument in the middle of the intersection is tasteful.  Handmade, quiet and respectful witness to a death. 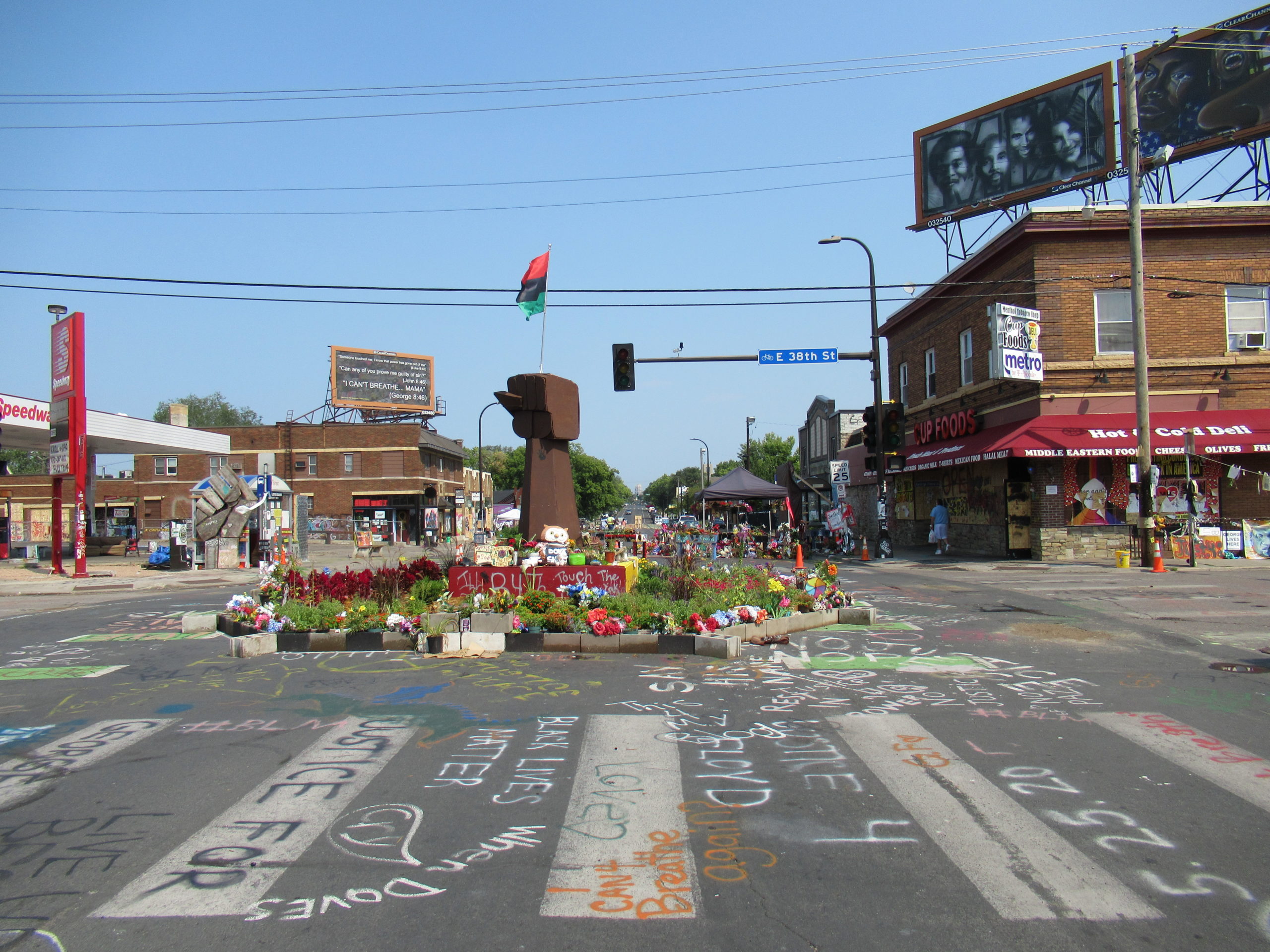 I title this post “Freedom” since I think the present conflict is between two distinct definitions of the word.  In a recent Washington Post column, well known conservative writer Hugh Hewitt concluded “[Americans] are calculating their future security, prosperity and, crucially, freedom. Freedom is the undervalued variable in 2020 election calculations. Americans love their freedom.”

We all love freedom.  Left and Right differ markedly on what that means, I feel.

On the one side, the side I prefer, are human rights for all.

On Hewitt’s side, and this was the litany over and over again last night, was freedom for the winner, the individual who gets the prize.