As readers know, I have great respect for Just Above Sunset compilation of national political news.  His summary of yesterday is below.  Check back later if you wish.

Those Minor Details, about Tuesday of the Trump Convention as gathered by Just Above Sunset, Tuesday, August 25.  Tomorrow, some comments about the nominee and his base.

August 26 is the 100th anniversary of the 19th Amendment, Women’s Suffrage, became the law of the land.  Colleague and friend Jane Peck of Lanesboro MN has produced a show about Women’s Suffrage.  Here are some details from her: “Our show, Votes for Women! Rally 1920, about Minnesota’s suffrage movement is on video (and a second video with What Happened Next.)  Thanks to our video project donors, you can watch it at your leisure, for free. 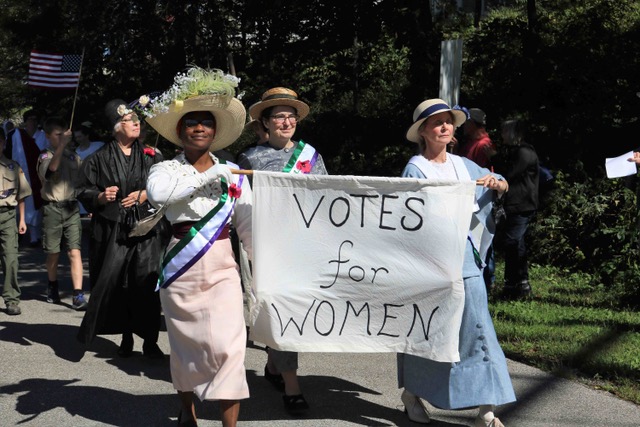 On our brand new website you can find [the] links for the  Votes for Women!  video and all our other shows! You can even donate there! We hope it is an easy website address to remember. We thank MLT Graphics of Rochester for creating our website.  And one more way-

A live outdoor socially distanced performance of Votes for Women! Rally 1920!   is planned for Landmark Center, St. Paul on their east side steps during a Thursday noon performance  event in late September or early October.  We will send an email alert when we know the date.  Free!
Three ways to remember the work of thousands of Minnesota suffragists (30,000 registered in MN in 1919.)- Millions more around the U.S.
Honor them by watching their stories in our show and, most importantly, by voting this fall!”

Sunday on my walk I met a neighbor coming in the opposite direction.  We see each other seldom, but are friends.  One of us asked the other, “are you going to watch the Convention?”  He said he was probably going to watch; I concurred.

Today, we ran into each other again on the same route.  We’d watched small parts – this wasn’t uplifting or enlightening.  Tuesday’s Star Tribune headlined on page one “GOP Paints a Dark Picture”.  The STrib is Republican leaning.  I was surprised, but only a little, at the headline.  This Convention uses the Republican name and logo, but it is not Republican.  That is for the former leaders of the old GOP to deal with, later.

As I write, an increasingly ominous Hurricane Laura is bearing down on Louisiana.

When I visited the Gandhi Mahal area Monday, I saw “Jacob Blake” scrawled several places on plywood covering windows.  “Jacob Blake”?  It wasn’t till later that I learned that story – a man shot seven times in the back.  That story rages on like the hurricane.  The news is full of its implications.

My school Principal daughter, Joni, had her birthday yesterday.  I stopped by her middle school in mid-afternoon to deliver a card.  I asked about school opening plans.  Best I understand, school opens for students on Monday; possibly half will attend, and those are the ones whose parents can/will bring them to school.  No bus routes as yet.  The staff will do the best they can under the circumstances.

Then there are the wildfires in California – the season is beginning again.  My brother in Davis sent this picture then from his home of the sky in his town. 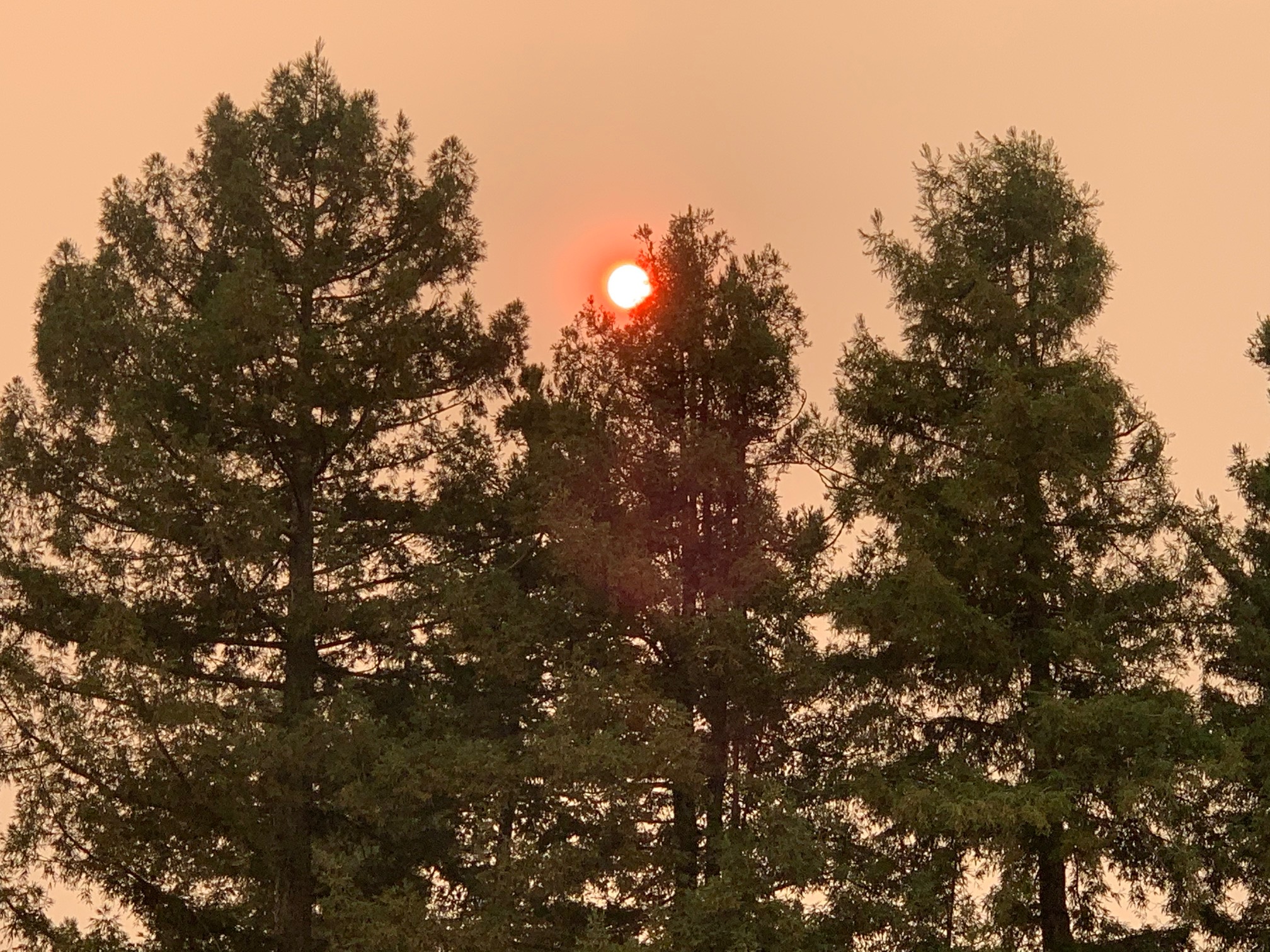 John’s note as follows: “Just a quick note to let you know that: Yes it’s August, yes, it’s fire season in California, and yes the closest fire to me is 20 miles of flat irrigated orchard and row crop land away from the nearest big fire in Vacaville and Lake Berryessa.

Major impact to me is extremely poor air quality, a ton of ash on the patio and driveway, and very very hazy sun as shown by the attached photo taken from out my outside my house. “… [T]he smoker even extended up [as] far [as Lake Tahoe] – and that’s about 100 air miles away.

We are seeing some evacuees coming from Vacaville, but they’ve got that city fire pretty much beat down and people are returning their homes there also. Major impact is going to be the loss of some really pristine and very highly hikeable and bikeable land in the wilds between here and Napa. Fortunately minimal reports of serious injury and or death – and this is all lightning caused.”

Update from John as of August 26: “…the fires are still burning, and air quality is still in the unhealthy range throughout most of Central and Northern California. “

And, of course, Covid-19, now over 180,000 Americans dead, easily the world champion in this category.  Here’s the google data.  Today, I saw the spin on the death toll, first publicized by Peter Navarro back in January that, theoretically, there could have been over 2,000,000 deaths in the pandemic.  That very worst case scenario estimate wasn’t useful till now.  So goes the current spin, only 180,000 deaths is a great success….and the beat goes on.

So much for the whole truth.