Prenote: each and every single one of us IS government and politics.  I post frequently on politics at this space.  I will write about the Democratic nominee for President and Vice-President after they are officially nominated at the Democratic Convention in a few days.  Check back.  This is our country, all of us, together.

In our garage, above my car, is the ancient mailbox that stood at the end of the driveway to the ancestral farm of my mother.  Here it is, photo’ed July 4, 2020: 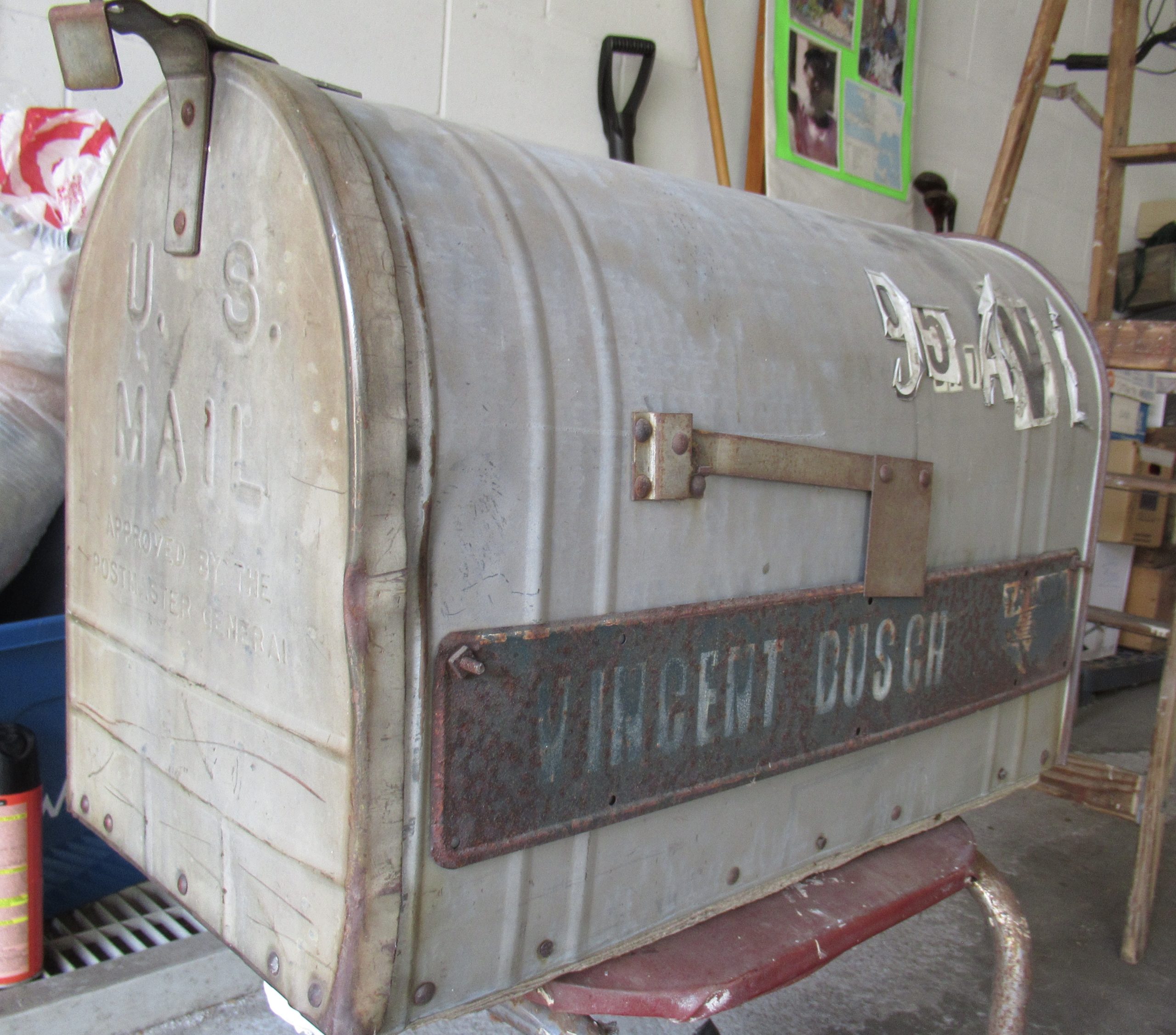 I had rescued the mailbox, as one of the last family artifacts to leave the 110-year family farm in 2015.  No heir even asked about it.  It was just junk.  I just couldn’t leave it behind.

In this picture it sits on the ancient chair that Uncle Vince sat on in his last visit to his farm in 2013, right before the Nursing Home ended his semi-independent living in town.   Vince’s mental acuity was declining rapidly.

For Vincent, and for most everyone else, including me, every day, checking the mail is a daily ritual.  It is central to most of our lives, even in this time of fewer ‘real’ letters, and the dominance of The Tube – TV or computer.

Personally I would guess I’m in the post office, physically, two or three times a week.  I like the post office employees.  I enjoy getting mail at the curb.  I still write letters by hand.

Now the postal service is again controversial, through no fault of its own.  Here’s today’s long post from Just Above Sunset, well worth your time: Mailing it in.

Put “mailbox” into the search box for this blog, as I just did, and you’ll find 26 references, the oldest of which is here, June, 2009, two months after I began to blog.

I wonder what Vince would be thinking, were he around today.  He was a quiet man, but my guess is he would have a strong opinion on this.  One of his daily rituals was to go down to get the mail.

That old chair on which the mailbox sits?  Here’s the story I wrote which includes a photo of that chair, from September, 2013.

Vince is now five years deceased (Feb. 2, 2015).  I can’t ask him for an opinion now, but I’m pretty certain he wouldn’t be happy at the current chaotic state of affairs.

You, reader, and I, and hundreds of millions of others, are still here, and the current issue is in our hands.

Do something.  To use the post is your, and all of our, Constitutional right.

from Steve: Your latest story was a lovely way to begin this weekend morning. There’s some nostalgia, some plea for more human correspondence, and some politics. Receiving one’s mail–or delivering one’s thoughts and information–without an effort beyond opening a computer or phone is convenient, I guess, but for me it offers less adventure than “going down to get the mail”–an act of some commitment, especially if the hike were more than a short driveway in distance. The current pushing match over this postal system seems especially profane when the tradition of stamps and delivery that’s been a confident exchange has become a political match stick. I hope that the mailbox in your garage has the karma or whatever it takes to keep us from the corruption of this connection to our democracy.

from Carol: My grandparents, living out in the wilds of North Dakota (as you know), got mail from TWO post offices.  Now people are in danger of not getting mail even from one.  This is NOT progress 🙁

This charming little story is from Grandma’s tape-recorded memories:

“You know, the Oriska mailman, he drove horses.  ‘Giddup. Giddup. Giddup. Giddup.’  You could hear him comin’ way from that Catholic church east of our place.  That was a mile.  You could hear him comin.’  ‘Giddup. Giddup. Giddup.’  So Pa told him every time he come to the farm he should put the horses in the barn and feed ‘em and then come to the house and I’d give him somethin’ to eat.  So we did that.  He brought the mail from Oriska, you know.  We had that mailbox right on the corner and then we had a Fingal mailbox down to the other corner, so we could get mail from both routes… That dress that Inez has got in that picture, his wife made that.  We fed the horses, you know, and give him somethin’ to eat.  And then this mail carrier got me a set of pans.  Three of ‘em.  And I liked ‘em so well, they was nice pans.”

(She went on to say that she found some of my uncles had “borrowed” her nice pans to make a still in the woods.  But, I digress…)

from Larry: When “Carol” mentioned Oriska and the postman, I am reminded of my maternal grandfather, Louis B. Musselman. He was a rural mail carrier out of Oriska during the mid-30s. There was a day during each year when he had to distribute Sears catalogs. This would be quite foreign to today’s Amazon users. That distribution day was a huge event to the rural mail carrier, as you can see in the attached photo.  My grandfather is the fellow behind the wheel and the other guy is probably the Oriska postmaster. 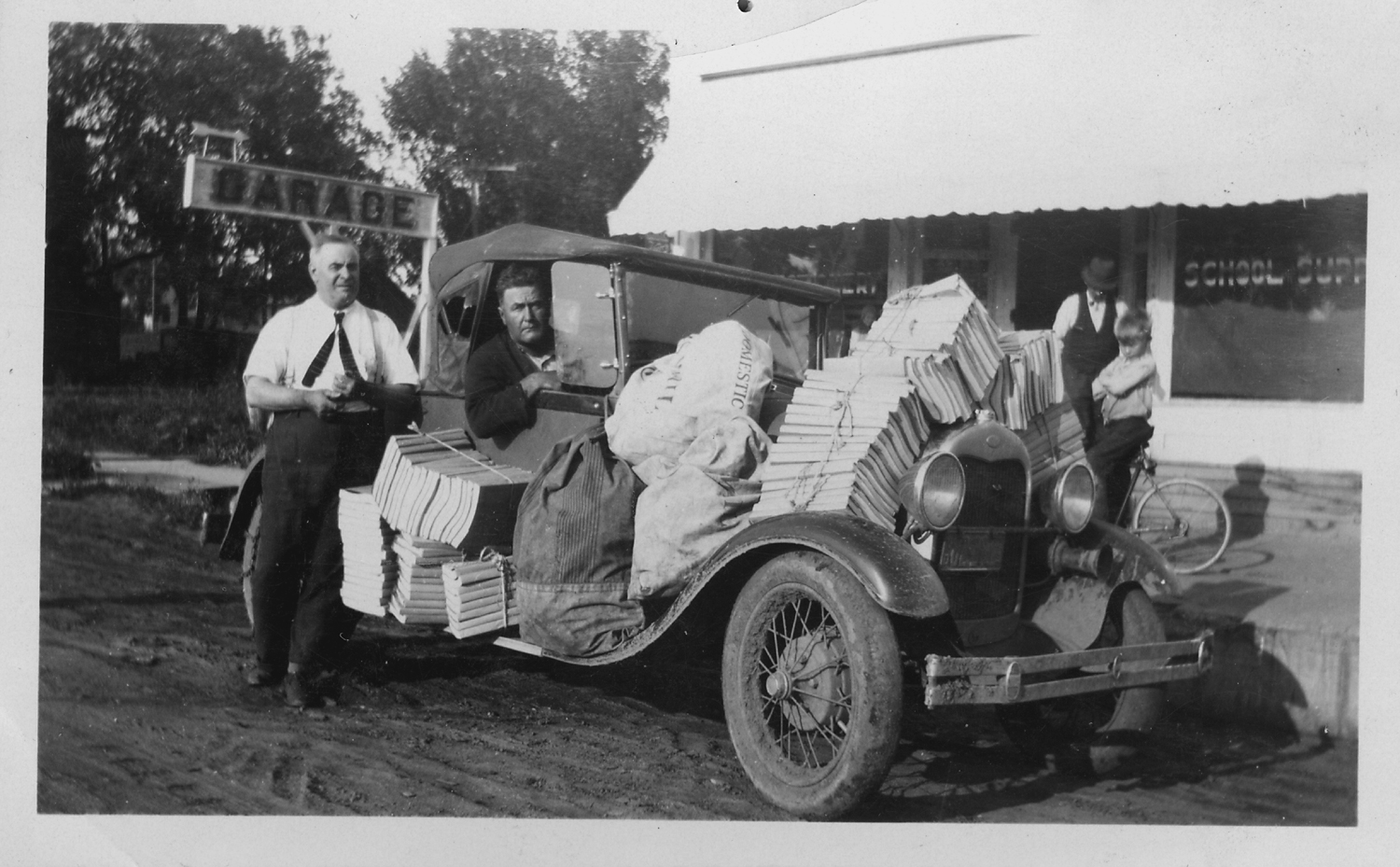 from Dick: A letter to the Postal Service which I began to deliver Aug. 17, first to my home mailbox:

Dear Postal Worker:  I have a long and very positive experience record with the USPS, including the last 20 years in Woodbury.  There are no horror stories in my files, and I’m in the post office two or three times a week; am shepherd for one PO Box in Woodbury for an organization I’m part of, have excellent residential service, and spend many hundreds of dollars every year for stamps and other services at the post office.

The Post Office to me has always been the people who provide the service…still today, every day, I look forward to the mail.

from Sonya: This was such an interesting blog post. At age 65, I also love getting “snail mail” instead of only text messages and emails, though I myself very seldom write a paper letter anymore.

from Walt: We still use the USPS every day of the week, and we buy stamps by the roll of 100!  We write checks to mail bills, send actual birthday cards to friends and family,  and mail gifts and other packages.  We do not use FedEx or other delivery companies. This is our choice, and we feel that we are doing our best to support the Post Office.